We all knew Jose Aldo and Renan Barao were good. Just how good the Nova Uniao teammates are, though, is less easy to quantify.

But after the Brazilian duo successfully defended their titles in back-to-back fights at UFC 169, it's become more clear: Aldo, the (as of now still) UFC featherweight champion, and Barao, his bantamweight counterpart, placed second and third in the current SB Nation pound-for-pound rankings.

Aldo, who defeated Ricardo Lamas via unanimous decision to go 14-0 in Zuffa and 9-0 in UFC/WEC title fights, has been featherweight champion since winning the WEC belt in Nov. 2009. While UFC president Dana White said Aldo "just lays back" in his fights -- an odd notion, given he's knocked out three of the top five contenders underneath him -- voters rejected that notion, giving him four of six second-place votes. His 51 points placed him second to UFC light heavyweight champ Jon Jones, a unanimous No. 1 pick.

Barao, meanwhile, was the beneficiary of a quick stoppage against Urijah Faber. But there's little doubt Barao was dominating the fight up until that point, much as he has against all the competition at 135 pounds. Barao's eye-popping 32d consecutive victory (minus a no-contest) was enough to vault him from sixth to third, as he got a second-place vote, two thirds, two fourths and a sixth.

Combined, Aldo and Barao have won 49 consecutive fights. Neither have lost since 2005. 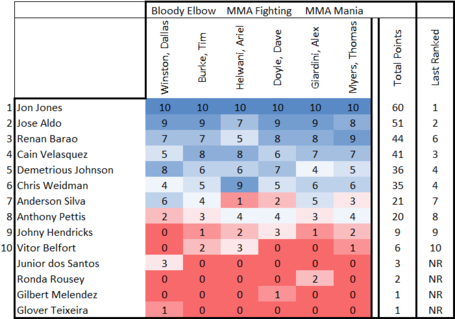 (Scoring: Fighters are given 10 points for a first-place vote, nine points for a second, etc., down to one point for 10th place. The results are then tallied up and presented here. Official SB Nation rankings policy: Fighters under commission suspension are ineligible to be ranked during the duration of their suspension or if they have licensing issues. This does not affect any fighters who would generally be considered for the pound-for-pound list at the moment).

1. Jon Jones (19-1 60 points): Those willing to dismiss Glover Teixeira as a credible challenger to Jones' throne would do best to remember that Alexander Gustafsson was similarly dismissed heading into their UFC 165 classic.

2. Jose Aldo Jr. (24-1, 51 points): As of this writing, we're all waiting to see if a fight with Aldo challenging for Pettis' UFC lightweight title materializes, in which case, Aldo would relinquish his featherweight belt.

3. Renan Barao (32-1, 1 no-contest, 44 points): Point to ponder: Barao's win streak is actually five longer than the sport's most celebrated win streak, the one put together by Fedor Emelianenko from 2001-10.

4. Cain Velasquez (13-1, 41 points): No return date set for Velasquez, who is expected to fight the winner of the April matchup between Fabricio Werdum and Travis Browne.

5. Demetrious Johnson (19-2-1, 36 points): No next fight announced, and frankly, no one at flyweight appears to be a huge threat to "Mighty Mouse" at the moment. Whomever the UFC comes up with, a June card scheduled for Vancouver seems a reasonable landing spot for the Seattleite.

6. Chris Weidman (11-0, 35 points): As of this point, Weidman's bout with No. 10 Vitor Belfort on Memorial Day weekend is the only fight between top 10 P4Pers currently scheduled.

7. Anderson Silva (33-6, 21 points): It's loud and clear that Silva has every intention of returning from a leg break most thought would end his career.

8. Anthony Pettis (17-2, 20 points): Holding the bout with Aldo at 155 pounds, and not having to make the cut to featherweight as had been planned last summer, would seem to swing such a fight into Pettis' favor.

9. Johny Hendricks (15-2, 9 points): Can solidify his spot in the Top 10 by claiming the vacant welterweight belt against Robbie Lawler at UFC 171.

10. Vitor Belfort (24-10, 6 points): The melodrama over whether Belfort will be granted a TRT therapeutic use exemption by the Nevada Athletic Commission for the Weidman fight will keep Belfort's name in the headlines for the foreseeable future.