The next time we compile the SB Nation featherweight rankings, there's a solid chance we'll have a new number one.

Not because Jose Aldo Jr. has been dethroned, mind you. Pretty much the opposite.

The main who has lorded over the 145-pound weight class for years appears ready to head up to lightweight to challenge UFC champion Anthony Pettis in his next fight.

If the match is made, Aldo would be forced to relinquish the top spot he's held since winning the WEC title from Mike Brown in Nov. 2009. That's an interesting choice in the UFC's part, given B.J. Penn did not have to drop his lightweight title to challenge Georges St-Pierre for the welterweight belt in 2009. Regardless, if the bout is made, then Aldo would no longer be ranked at 145 pounds and a fight to fill the championship between the duo the UFC deems the top two contenders would be made.

As of this writing, though, Pettis vs. Aldo isn't official -- Aldo's camp made an unsuccessful attempt to force the bout a 150-pound catchweight, and UFC president Dana White said that "hurdles" have been cleared -- so until it is officially made, Aldo remains ranked here at 145.

If the pseudo-superfight does get made, though, this month's SB Nation featherweight list will serve as a historical snapshot of what exactly a division pretty well laid to waste by a champion. Aldo's defeated each of the top five contenders ranked underneath him, three via knockout. The bottom five are talented guys who aren't going to be in position for a title challenge any time soon. This, folks, is what a cleaned-out division looks like.

If Pettis vs. Aldo is made, White indicated that Chad Mendes vs. Cub Swanson would be the likely fight to fill the title vacancy.

Mendes is a no-brainer pick to compete for the title. The Team Alpha Male fighter's only career loss is to Aldo, and since dropping their UFC 142 fight, Aldo has won five straight fights. He was a near-unanimous No. 2 pick this month, getting five of six second-place votes.

As for the other spot, Swanson, who ranked No. 5 this month, is one of several fighters worthy of consideration for the spot. It appears his getting the nod is as much do to timing as anything else.

Former lightweight champion Frankie Edgar would have been a popular pick, and could headline a pay-per-view, but he's also locked into his TUF coaches fight against B.J. Penn, which won't happen until June.

Edgar finish tied with Ricardo Lamas for third in this month's. The question with Lamas is, can you send him right back into another title fight, fresh off losing four of five rounds in challenging Aldo? White and Co. have apparently decided no. 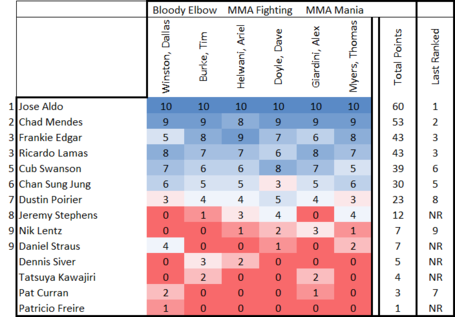 (Scoring: Fighters are given 10 points for a first-place vote, nine points for a second, etc., down to one point for 10th place. The results are then tallied up and presented here. Official SB Nation rankings policy: Fighters under commission suspension are ineligible to be ranked during the duration of their suspension or if they have licensing issues. This does not affect any featherweight fighters under consideration at the moment).

2. Chad Mendes (16-1, 53 points): Shook off the flu to beat Nik Lentz at UFC on FOX 9 via decision, the only fight on his current win streak he didn't take via finish.

3t. Frankie Edgar (16-4-1, 43 points): With the division on the brink of a potential seismic shift, Edgar is trapped in a fight with someone he already beat twice in another weight class.

3t. Ricardo Lamas (13-3, 43 points): Why Lamas chose to stand and bang early with Aldo rather than try to implement his wrestling game will go down as a big "what if."

6. Chan Sung Jung (13-4, 30 points): Still no timetable for "The Korean Zombie's" return as he rehabs the shoulder injury suffered in his fight with Aldo last summer.

8. Jeremy Stephens (23-9, 12 points): At 3-0 since dropping to featherweight, Stephens' UFC on FOX 10 win over Darren Elkins was an eye-opener. "L'il Heathen" has progressed from brawler to well-rounded fighter.

9t. Nik Lentz (24-5-2, 1 NC, 7 points): There's no shame in losing to a competitor like Mendes. Next time Lentz steps into the cage he'll be looking for his fourth win in five fights.

9t. Daniel Straus (22-4, 7 points): Straus' Bellator title victory over Pat Curran in November was his 18th in his past 19 fights.