UFC 169 had something for every one to enjoy. There were two titles contested, a scintillating knockout in the opening bout of the main card and expert submission defense employed throughout the fight card.

There was also much that left a lot to be desired. The co-main event seemed stuck in third gear, the main event wasn't very competitive and the event set the record for the most decisions on a single UFC card.

This situation is apparently counter intuitive, but we need to come to terms with it just the same. X fighter loses enough fights where UFC brass essentially issue an ultimatum that X's next fight is essentially do or die in terms of retaining employment. X fighter is typically placed opposite Y talent where Y is expected to push X to the umpteenth degree both stylistically and especially given all the stakes. Fans and media hotly anticipate the action. We talk about X's impending bout as one where a premium on action is what's required to secure a future in the UFC.

And what inevitably happens? X fighter turns in the most risk averse, measured and uninspiring performance imaginable, which is precisely what happened in Alistair Overeem vs. Frank Mir. That isn't anything to really bemoan either. Those sorts of performances, especially when they result in a win, are worthy of praise. The point is that we all need to stop viewing moments when a fighter's back is against the wall as the catalyst for an exciting, all-out brawl. The rational response is to seek a win, however one can be cobbled together. A win is more reliable as a guarantee of future employment than a thrilling loss, which is the only relevant truth here. Occupationally desperate fighters don't throw caution to the wind (often, anyway) no matter how much of a phony narrative we force them to suffer under.

Argument Not to Be Taken Back: UFC 169 Was Worth Watching

Heading into Saturday, I was vocal about the UFC 169 main card. I knew the prelim card would be dreadful, but I had very high hopes for the main card. In the end, they didn't quite pan out, but I absolutely do not take back the suggestion that others prioritize the event. That's true for the same reasons I used to support the event, namely, the card featured two champions in reasonably competitive bouts against worthy contenders, important heavyweight action, a flyweight title eliminator and an opening salvo engineered for violence. It didn't pan out as expected, but they rarely do. The key is to have the right priorities about what sort of MMA you expect and to make plans around that. If they don't work, fine, but in the long run you'll be far more satisfied.

Most Prominent in Absence: Dominick Cruz

I haven't the slightest clue how former UFC bantamweight champion Dominick Cruz will perform by the time he returns to action, but it can't come fast enough. I, too, thought Herb Dean's stoppage of the main event was grossly premature, but I also couldn't bring myself to outrage either. That's unusual as my response to stoppage fairness usually dictates how I feel about the bout itself, in large part, anyway. Not this time. For as established and proven a competitor Faber is, I'd be lying if I didn't think Dean was doing him a favor by calling it when he did. I'm not saying that justifies Dean's stoppage in any way, but I'm not going to write about things I don't believe.

The point is that Faber didn't have much for Barao or didn't seem to. There might be other worthy contenders in the bantamweight division who active, but until Cruz returns (and hopefully resembles his 2011 self), we're all still in a waiting pattern to see Barao get tested.

The conventional wisdom on fighters retiring is is deferral to whatever they want, an exercise I find to be utterly phony piety on the part of fans or media. "Whatever the fighter thinks is best for himself is what I want," you routinely hear. What nonsense. Some fighters, like any other group in society, do not know what is in their best interest. But let's assume they do in each and every case. Do any of us truly believe Frank Mir is going to make a decision based on anything any of us say? Please be serious. That would mean he wouldn't listen to the folks deferring to him either, but at least we wouldn't be adopting an utterly pretentious position dripping with faux concern.

As for Mir specifically, he's had his share of injuries and bad knockouts, but he isn't getting blown out, bout in and bout out. Things didn't go well against Josh Barnett, but he wasn't run over by Daniel Cormier. Alistair Overeem, however conservative, couldn't put him away either.

I don't know if Mir is done, but he's placed himself into the stage where, at a minimum, he has to take a step down in competition. If he begins losing there, then he has some serious questions he needs to ask himself. 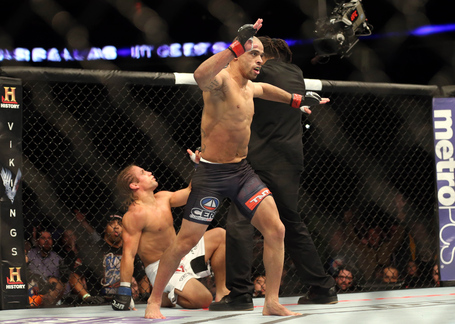 Renan Barao is in the foreground, but Faber is the star of this photo. The pleading nature of his face and posture in the face of referee Herb Dean is statuesque. It's as if he's genuflecting before an angry god in some piece of medieval art.