Daniel Cormier has crashed the party in the light heavyweight division. But Jon Jones and Alexander Gustafsson still reign supreme.

Jones, the UFC light heavyweight champion and No. 1 pound-for-pound fighter, was the obvious unanimous pick atop the 205-pound weight class in this month's SB Nation poll, taking all six first-place votes.

And Gustafsson, who came within a whisker of taking Jones' title in September, was a unanimous choice for the second spot, with 54 points.

Of course, anyone who's been following MMA for more than a day knows not to consider Jones-Gustafsson 2 a done deal until both fighters take care of business in their next fights.

Jones meets Glover Teixeira at UFC 172. Teixeira is on a 20-fight win streak dating back to 2006 and pretty much hits like a truck. He finished third this month on the strength of three third-place votes and two fourths.

Stranger things have happened in this sport than what would go down if Gustafsson lost to unranked Jimi Manuwa on March 8.

But until proven otherwise, Jones and Gustafsson will be assumed head-and-shoulders above the pack.

Meanwhile, where to rank Cormier was the division's big unanswered question. The undefeated former Strikeforce Heavyweight Grand Prix champ made his light heavyweight debut at UFC 170, as he made short work of late replacement fighter Patrick Cummins. While defeating Cummins in and of itself isn't going to vault a fighter up the rankings, his prior resume in a higher weight class carries considerable value.

Cormier took fifth place with 36 points, claiming two-third place votes, one fourth, a fifth, a sixth, and an eighth. That put him one spot behind the guy he was originally supposed to meet in Las Vegas, Rashad Evans. 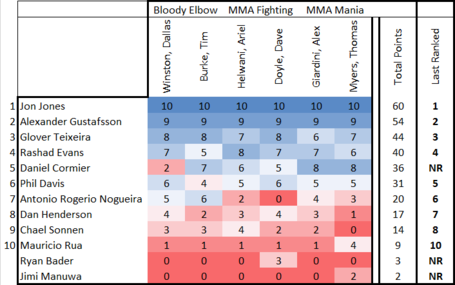 1. Jon Jones (19-1, 60 points) -- Not that this is happening any time soon, but Jones is the new pivot fighter in superfight chatter, the way Anderson Silva used to be. He seems more interested in taking on Cain Velasquez than Chris Weidman.

2. Alexander Gustafsson (15-2, 54 points) -- Gusty is in your classic "far more to lose than gain" spot against Manuwa in London.

3. Glover Teixeira (22-2, 44 points) -- Teixeira's supporters will note he has finished nine of his past 10 opponents heading into his bout with Jones. Detractors will likewise note his biggest name in that stretch was a fading Quinton Jackson, who was the only fighter in that stretch who went the distance.

5. Daniel Cormier (14-0, 36 points) -- Showed no ill effects from his weight cut down to 205, and also showed freakish power for the division in the win over Cummins.

7. Antonio Rogerio Nogueira (21-5, 20 points) -- Positive: Little Nog earned the decision win over Evans at UFC 156. Negative: That's his only fight in the past 27 months, without another one on the horizon.

8. Dan Henderson (29-11, 17 points) -- While classics are hard to repeat in rematches, Michael Chandler and Eddie Alvarez proved it can be done. Henderson meets "Shogun" Rua on March 23 in a rematch of one of MMA's greatest battles.

9. Chael Sonnen (29-14-1, 14 points) -- Sonnen can pretty much only look to maintain his standing in the division with a win over Wanderlei Silva in May.

10. Mauricio Rua (22-8, 9 points) -- For "Shogun," repeating a classic is going to take a backseat to simply winning in order to stay relevant.