There was a lot to like about UFC 170. Daniel Cormier became an instant contender with a healthy weight cut to light heavyweight, a Ronda Rousey vs. Cris Cyborg fight now has much more added appeal, and top fighters made the adjustments necessary to further their careers. There was also a lot to dislike. The hype for the bout was very so-so, the main and co-main event weren't competitive and UFC cards are as filled today with almost as much unremarkable talent as there are elite fighters.

It's time to separate the good from the bad, the winners from the losers and the signal from the noise from UFC 170: Rousey vs. McMann.

Most In Need of Improvement: Reforming the Language of Referee Stoppages

Credit Where It's Due Award: Zach Makovsky and Raphael Assuncao

Here's the good news: Machovsky and Assuncao have found their weight class home in MMA, developed their skills enough to maximize their chances to win at the elite level and have begun to cobble together pretty impressive resumes. Makovsky has won four straight since dropping to flyweight, two of them in the UFC, which were coincidentally his first two UFC fights. He did all this against very credible opposition. Assuncao has won six straight since dropping to bantamweight, and did so against ultra-tough opponents. It's also important to note both had success in previous heavier weight classes, but also stinging, bad defeats. That they've turned it around is a testament to why we had belief in them in the first place. The bad news is I'm not sure how sellable they are as contenders. As gifted and accomplished as they are, they haven't exactly sparked a huge amount of interest in their performances. Not yet, anyway. That's why I'd prefer to at least see each of them one more time in a tough bout with real consequences before we give them title shots. They've got resumes, yes, but they haven't captured imaginations. Both are essential in this sport.

It certainly would have been nice for MacDonald had he thrashed Demian Maia from pillar to post en route to a brutal or otherwise unequivocal stoppage on Saturday, but I actually think the way in which he won might be even better. The reality of the fight game is not that champions never get tested, but how they manage to find ways to win even in the most difficult of circumstances. It's impossible to not lose rounds, get rocked, lose a takedown battle, suffer an injury or some other setback in the course of fighting the best, fight in and fight out. They happen. The question is how the fighter reacts to them. A very human response is to eventually succumb to them, so there isn't shame there in knowing there are limits. But MMA champions act in ways beyond the scope of rational self-preservation or parameters of their humanity. I don't know if MacDonald will ever be champion, but by powering through a scary first-round against Maia, where a black belt multiple-time world was in mount, the Canadian proved adversity is not his Achilles heel. He is not a front runner. He is not merely a very good fighter who wilts under pressure. He is an excellent competitor who pushes back against it. MacDonald still has a path to continue walking if he wants to fulfill the promise of his career, but his effort on Saturday night should give renewed hope to those who maybe lost a bit of faith along the way.

Let's not read too much into the win over Rafaello Oliveira. The Brazilian is a credible challenge, but his time spent in the Octagon tells us he's quite beatable for opposition at this level of the game. Koch did exactly what everyone expected him to do, so managing our expectations is important. Still, the move to lightweight seems like the right career adjustment at the appropriate time. The walls were closing in at featherweight, which was due to losses suffered; loses suffered partly as a consequence of the tremendous weight cut he was trying to push himself through. He's recalibrated and looks recharged at lightweight. As we know, the path to the top of the division might be the most difficult of them all, but that's not what an athlete pays attention to when deciding where to compete. The more salient question is whether or not Koch is putting himself in the best position to maximize his ability in order to win. From that vantage point, it's so far, so good. 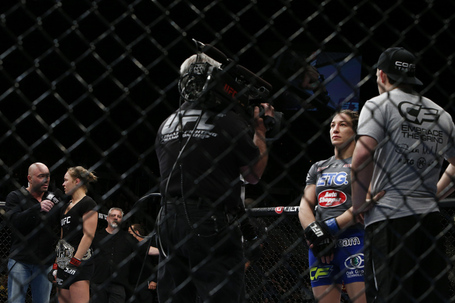 I find this picture remarkable. McMann, off to the side and waiting her turn after Rousey gets done first, doesn't appear forlorn or frustrated. She tried and she lost. She's a competitor, after all, and understands sometimes things don't unfold as we would have hoped. She's not kicking or screaming. It's all very matter of fact. She patiently waits her turn to quickly say thanks and maybe she'll have better luck next time. It's not a particularly great way to stay memorable or visible, but at least she gets to keep her dignity. In the fight game, especially through a loss, that is a very rare thing to see. More UFC 170 photos here.

Most Sobering Reality: Alexis Davis Is a Contender, but No One Is Talking About It

The narrative about defeating Rousey now has morphed into a stage where we discuss singular aspects of her game. As such, there is some speculation as to whether Alexis Davis, an accomplished jiu-jitsu black belt, has enough to thwart Rousey's formidable ground game. But there isn't much talk about it as there could be, at least relative to what some of the drum beating used to be. It seems to have set in that whatever Davis' skills, she isn't close to the level of athlete Rousey is. And in terms of what they've turned in inside the Octagon, she seems to be out of her depth as a potential contender, too. The onus on the UFC is going to be finding a way to make the Cris Cyborg fight because while the Ronda Rousey Show as a destroyer of women is fun, it becomes a little less novel when there's no tension in anticipating what the outcome of her bouts may be.

Greatest Truth: MMA Quality Is Tough to Produce at Scale

I've been saying this for years and only now am I beginning to see MMA or UFC fans share complaints. Perhaps I spoke too soon or we all occupy different points on the same sliding scale, but in either case, there is a much more visible concern that UFC cards are getting too thin for their own good.

The interesting fact here is that arguing this with the hardcore fan base produces a curious response. Try it sometime. What you invariably receive is some version of push back that may or may not say you are wrong, but that in either case it's irrelevant. You see, what matters most is UFC has global ambitions and they need fighters to fill out all of these cards. Moreover, the more territories they expand into, the more licensing fees they can collect when they strike deals with networks and other broadcasting outlets. This is about diversifying revenue streams and lessening the reliance on North American pay-per-view subscribers. This is about kick starting markets worldwide.

What a weird thing to argue. Why are fans aping what Zuffa's line of thinking is on the matter? It's not a function of being wrong or right. Zuffa is allowed to do whatever they wish with their product by the terms they best see fit. But consumers of this product - of which I am - do not have to concern themselves with that. What we care about is our door step: my $9.99 for the Fight Pass product per month or $55 for the high definition broadcast of UFC 170. What matters to us is our transactional relationship with the UFC. If they have global ambitions and revenue diversification at the forefront of their model, that's their prerogative. Mine, as a consumer and not a journalist, is what I'm paying for, both financially and in terms of various forms of opportunity cost, e.g., hours spent watching a product that could have been used doing something else.

Memo to consumers: repeating the UFC's arguments about what it wishes to do with it's product as a defense of it is the least consumerish thing you can do. My concern, as a paying consumer, is what I'm getting. That's a selfish way to view things, but that's who consumers are. And what I see is that trying to keep quality at scale as the UFC expands is an extraordinarily tough thing to do, especially with injuries. Cards are only heavy at the top thus far in 2014 and were they combined together as opposed to being splintered across the planet, they'd be infinitely more interesting. Maybe if the level of MMA improves globally as the UFC hopes, this concern will dissipate over time. For now, though, there's an issue of bang for the buck. I understand why that's the case on the UFC's end of things. I'm a lot less sympathetic on as a paying consumer on my end.