Could UFC president Dana White be softening his stance on testosterone replacement therapy (TRT)? After admitting in January that he and middleweight challenger Vitor Belfort weren't on good terms over his use of TRT, White, speaking with media members Thursday, lacked much of the vitriol he's previously expressed over the treatment. Calling TRT 'unfair' in the past, White's hardened stance seems to have been replaced with more of an endorsement of regulation.

"Of course," said White when asked whether or not Belfort should be eligible to compete while undergoing TRT. "Absolutely. It's absolutely legal. He can apply for [a testosterone use exemption (TUE)]. That's up to [the Nevada State Athletic Commision]. Like I said before, a lot of guys are on TRT. Guys are getting exemptions and using it. I just think the Vitor thing is overplayed. Yes, I know he tested positive, but the guy's had these exemptions. He's been able to use it. He's going to apply for it and if they say 'No' then he's going to have to fight without using it. It's as simple as that."

Scheduled to face middleweight champion Chris Weidman at UFC 173 in Las Vegas, Belfort would need approval of a TUE by the NSAC to continue his treatment. Competing for PRIDE In 2006, Belfort tested positive for 4-hydroxytestosterone while competing in Nevada, meaning the NSAC would need to issue an exemption allowing him to continue TRT leading up to his bout. Unfortunately for Belfort, that decision wouldn't be consistant with its policy of not allowing a TUE if an individual's needs derive from past non-sanctioned use.

Despite his obvious interests promoting Belfort, White does admit that ultimately he'd like to see the NSAC work towards an outright ban on TRT.

The shove. Could Daniel Cormier, a pro wrestling fanatic, be pulling one over on us to hype his fight with Patrick Cummins?

Gil. Dana White is totally cool with Gilbert Melendez checking out the open market, but says Bjorn Rebney is 'out of his f****** mind.'

Not happening. Put away all hopes of seeing a future bout between Matt Hughes and Matt Serra.

Erik Koch says he was getting up to 210lbs between featherweight fights.

This is Trent posting this. Here is a video done by one of the Limestone Wrestlers, Pat Seidel, that indeed... http://t.co/SPz7gWqbGs

Big to thanks to Nick and everyone of @CitizensVegas for the part-time work before #UFC170 @ufc pic.twitter.com/4ZSrUMjFVX

TAKEDOWN: THE DNA OF GSP in Canadian theatres today! We'll have info for how the rest of the world can see it soon! pic.twitter.com/XvaA29rs0V

He FINALLY won and this was his reaction. Literally played 4 nights in a row. I died. @logankilgore... http://t.co/azoYYZPxsP

I will never stop !!! one day one step more ... Finishing my training. pic.twitter.com/n19WgOlZeK

Great work with my man @johnpicp at The Irish Strength Institute. Built to move. Move to kill. #TheComeback pic.twitter.com/NOP1ldFcVh

Another deleted Jon Jones tweet. This one standing next to Anderson Silva at his Nike commercial shoot. 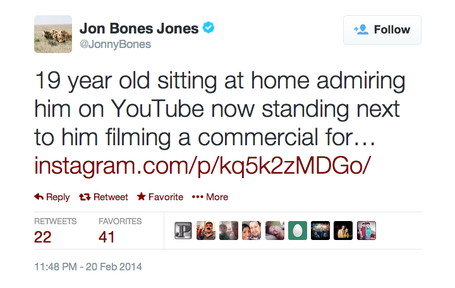 I have one major problem with this cake.

I just would like to thank y'all for my B-Day wishes!!! Much appreciated, Y'all are amazing... #GettingWiser http://t.co/ML4Wvs4UL6

Update: Still no news on a fight yet 😔

"First thing I'm going to do, is get some decent food." #Aliens http://t.co/VKOx4K5vZr

DESIGN MY WALK OUT SHIRT!!! I have decided to let one of my fans design my walk out shirt for my fight with... http://t.co/Vhy3NTYez8

Estevan Payan vs. Sean Soriano at UFC on FOX 11

Today's Fanpost of the Day comes via mjanecek.

Hello there, Lineal Title fans! It's been too long. I thought this week would be a great time to comeback with a lineal title post, considering all the action we have in store for Saturday night's UFC PPV. The big one, of course, is Ronda Rousey's match up with Sara McMann in which 8 WMMA titles will be up for grabs. Two unification bouts are on the card as well including Alexis Davis (Ring of Combat, Pink Fight) vs Jessica Eye (Bellator MMA) in a battle for 3 titles and Zach Makovsky (RFA) vs Josh Sampo (CFA) for 2 lineal titles.

For those of you who may be new to these posts, over the last few years, I've been tracking lineal titles across 60 different MMA promotions from Super Heavyweight on down to Flyweight (Recently adding WMMA titles as well). This amounts to just over 300 lineal titles in total. Why? So, I can report the results to the BE Community, that's why! Plus, I think it's a fun way to appreciate the history of the sport, while understanding who THE fighter to beat is in each weight class.