Saturday's UFC Fight Night 36 in Brazil had a lot to offer. Four of the best middleweights on earth competed on the card, the very best one emerged out of the group and the event featured some outstanding finishes. Yet, the card also tied the recently-set record for the most decisions at one UFC event, featured sub-UFC talent and plenty of non-action between forgettable names and faces.

It's time we separate the good from the bad, the best from the worst and the signal from the noise from UFC Fight Night 36.

Whether you believe Chris Weidman will retain his title against Vitor Belfort (I do) or that Belfort will earn another UFC title, it's become virtually undeniable that Machida is the clear top contender in the middleweight division. In my judgement, he's also by far the biggest threat to whoever is the champion at the time they eventually meet. There is a series of dangerous contenders to be sure, but none match Machida's speed, fight management, defensive fundamentals, experience, and offensive skill set. No one in the division can match what Machida presents as a threat to either Weidman or Belfort and that's true for just about every phase of the game save Jacare's grappling. Whether he'll win the belt in the end is impossible to say, but as talented as Ronaldo Souza can be or Luke Rockhold might become, the true looming threat in this division is 'The Dragon'. He marries unbelievable skill with priceless experience in a weight class that now maximizes his physicality. We cannot say that for anyone else vying for the middleweight title at this time.

Least Appealing: Number of Fights With Fighters Not Really Ready for This Level of The Game

I'm not going to suggest there were a ton of non-UFC-ready fighters on this particular card (although there were a few), but it has been enough in 2014 that it's impossible to not notice. Mixed martial arts at the professional level is incredibly difficult to do well. There is a very finite number of fighters who can do it well enough to both demonstrate elite skill and provide entertainment. I'd submit the number is around 100 worldwide, although I'd be open to the idea there's more. Whatever the case, as the UFC expands the number of events, fighters and fights per card, there is no choice but to dilute the quality. It's not an insult or slight. It's a statement of fact. It's simply not possible to host that many fights and maintain the integrity of the product at the level it historically has been. There's an open debate to be had about how much quality depreciation there's been, what it means and whether it's enough to be concerned about (maybe it's not), but no one can argue the quality is unchanged. And from my vantage point as a consumer of the UFC product and experience, I can't confess to thinking the expansion and creation of extra content is something I care for when I've been accustomed to a much greater standard.

As much as I bellyache about the expansion of the fight roster, there's almost always a gem or two hidden in every UFC card. Such is the case with Alcantara vs. Reis. It wasn't merely a grappler's delight (it was that, too), but two fighters playing as close to their strengths as possible in an effort to find a finish. Ultimately, that's really all we ask of any of these combatants, right? Give us the best of what you have and give as much of it until the fight is over. That we got to see deep half guard sweeps from Reis and deft ground and pound from Alcantara just sweetened the pot.

Best Photo: The Epitome of Finishing an Opponent 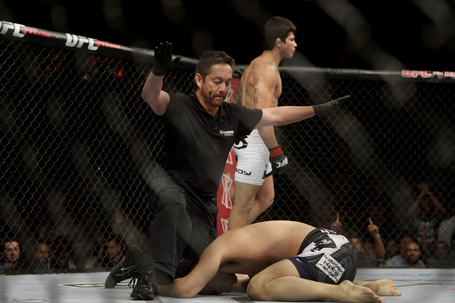 Some viewers were objecting to the Erick Silva vs. Takenori Sato bout for being a mismatch. They're right, technically, but I give the UFC a pass in using Sato as a replacement. In any case, is there a greater example of unbridled victory in photographic form than this? Sato's body has just enough life in it to beg for mercy, Yamasaki's gesture is unequivocal and Silva - at distance, not even looking at his vanquished foe - has a blank face. This is all an uneventful matter of routine to him. That is about as ice cold as it gets.

Most Pleasing in Its Minimalism: Lyoto Machida vs. Gegard Mousasi

The main event wasn't action packed, but I'm not sure how someone could walk away hugely disappointed. For what it lacked in activity, it made up for in the tactics and strategy that underlie that action. The fight was enjoyable because both fighters - two enormously talented middleweights - spent the entire time trying to think through very difficult circumstances. Neither fighter was ever out of the bout to any real degree, which kept the tension just heightened enough to maintain your attention and intrigue. And when both fighters were able to effectively execute on a strategy or particular technique, it was fairly savvy stuff. We don't need to overpraise this bout by placing it anywhere near any year-end Best Of list, but it's a good example that high-level, enjoyable MMA doesn't only take place in the confines of a proverbial mosh pit. Sometimes it's much closer to a coordinated dance.

Minor but Fun Development: Heel Kicks off of a Single Leg Takedown

There isn't much to takeaway from Erick Silva's ruthless dispatching of Takenori Sato other than what happened is precisely what was supposed to happen. There was one noteworthy wrinkle, however. Silva was able to do his best MMA version of the Harlem Globetrotters fighting Sato's Washington Generals when Sato, diving onto a head-outside single leg after being drilled in the gut by a hard body kick, found himself eating the heel of Silva's opposite leg as the Brazilian brought it behind his body as if he were clicking his heels.

This isn't a revolutionary technique. It's also not one that is likely to be adopted in huge numbers. It's only good for the type of single leg not common among high-level fighters and is probably more a nuisance than an actual deterrent. Still, it's always fun to see fighters experiment and take risks. And besides, if you badly outclass your opponent and don't try something different or perhaps a little risky, you're not doing it right.

Honorable mention goes to Gegard Mousasi for his cradle-esque sweep from the bottom in half guard, too.