Morning Report: Dana White says Ronda Rousey is the biggest star the UFC has ever had and will soon be paid like it

While UFC president Dana White reminds us Alistair Overeem and Cris Cyborg are very well cemented on his bad side, women's bantamweight champion Ronda Rousey seems to exist on a whole other plane of existence.

Speaking with media at UFC headquarters in Las Vegas Thursday, White says Rousey is MMA's biggest star by a mile and that she's about to be paid like it, via Yahoo! Sports' Kevin Iole:

"She's the hugest superstar," White said of Rousey, who will defend her belt against Sara McMann at UFC 170. "I'm going to go out and say she's the biggest star we've ever had."

White said depending on how the pay-per-view results do on Feb. 22, Rousey, in just her third UFC fight, could break into the company's top 10 all-time in terms of career earnings.

If Rousey's managed to achieve that premier status chiefly off a single rivalry bout with Miesha Tate, what sort of business could she manage fighting Cyborg? Still No. 1 in quite a few women's pound-for-pound rankings, Cyborg continues to insist competing at 135 pounds could do irreversible damage to her body. According to White, who, at one point challenged the room to defend Cyborg's claims of being free of performance enhancing drugs, seems to think her and Rousey don't even exist in the same universe.

"Ronda's never cheated, ever," White said. "She's an Olympian. She's a world champion who has not only defended her [expletive] title, but I asked her to go back-to-back and she [expletive] did it. Coming straight off filming two [expletive] movies, a training camp. This girl, the other thing with this girl? She gets the [expletive] flu, gets sick, run down, [expletive] like she's going to die, and she still [expletive] trains through camp.

"I've got a big 6-foot-8 [expletive] musclehead whose rib hurts and won't [expletive] fight dos Santos. This chick does two movies back-to-back, fights, comes back in [expletive] camp, films 'The Ultimate Fighter,' [expletive] does all these appearances and all this other [expletive]. She's a [expletive] rock star. She's never cheated. She's done all these great things. She's an Olympian and she has to answer questions about Cyborg [expletive] Santos?"

If you're holding your breath for Rousey-Cyborg, that's your cue to go ahead and exhale.

Bad news. Early reports were a bit optimistic as it seems Evans will require knee surgery and could be sidelined 'for a while,' according to Dana White.

DC on Cummins. Cormier says he's ready to set the record straight on fight night. "He may say he broke me in practice and made me cry, but I guarantee you, more times than not, Pat Cummins was on the receiving end of whatever whipping was doled out on that day."

Willing to wait. Gegard Mousasi says he's happy to wait for a title shot with a win over Lyoto Machida.

Chael-Wandy off UFC 173. Chael Sonnen will now face Wanderlei Silva in a headliner bout for a UFC Fight Night on FOX Sports 1 in Brazil.

A glimpse at Patrick Cummins from a 2013 fight.

Hopefully Rashad has a nice stack of Todd McFarlane books to get him through.

@officialdurkin ur an idiot. U just made it much worse. I can't wait until next weekend! @ufc 170 #grind #kingofthegrind DC

Jones deleted them, but... 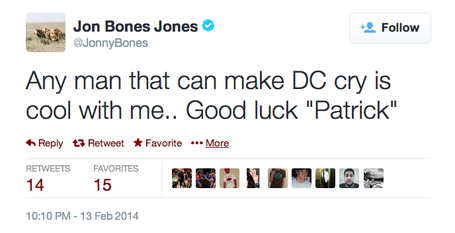 @danawhite so I haven't fought anyone, but a guy who is 4-0 and opponents comb. record is 9-19 gets an immediate co main fight. Lets hear

@danawhite the real reason. Didn't a former @BellatorMMA fighter to come and prove he is the best in the world! #fatbaldmansegoistoobig

I can't believe no one else is up in arms about Dana telling Gil to kick rocks. Dude is top 5 in the world hands down. Pay the man! Unionize

What could have been.

@One_Punch well it's either you had a bad feeling or your talking shit but to pussy to say anything.

@One_Punch more then willing Ill send you medical records idiot Once I heal up I'll make sure this fight gets booked. Im going to retire you

This is why @THEREALPUNK is top 3 in the world. To perform with this injury after 1st rd & still Most felt he won pic.twitter.com/zXhdth2iU8

Getting Stitches out today at #SOARclinic and a permanent cast over the pins in my thumb for the next... http://t.co/0RB7YeRxbx

Back on the water.

Hey @Sholler_UFC Thursday funday just doesn't have the same ring to it? pic.twitter.com/toyZ6D3K51

But can she make a caramel macchiato?

If @dc_mma can't find a replacement, Bella said she was ready :-) pic.twitter.com/mqhQZS2Lem

Rashad Evans out, Daniel Cormier vs. Patrick Cummins at UFC 170

Today's Fanpost of the Day comes via dpk875.

Top Prospects to Watch this Weekend

Here are some of the better prospects in action this weekend.

Teodorczuk is part of the growing line of talent Polish fighters emerging across the European, and soon international MMA scene. He is riding an 9 fight winning streak, with his last win a submission over Paul Redmond opening many people's eyes. 7 of his 11 wins have come by way of submission.