The Day We Knew Chris Would Be Champ Part 1: The Single Leg 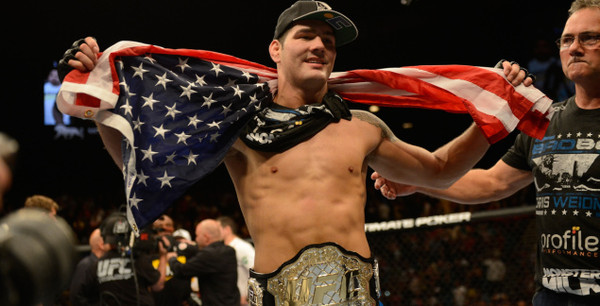 Chris Weidman, the man who did it. The man who ended the Spider's reign. A lot of people thought he had no chance, or that he did not deserve a shot at Silva when he got the fight.

No one really talks about anything other than the late stoppage in Weidman's bout with Mark Munoz. They never seem to bring up how dominant Chris was. This fight could be argued as the most dominant win in UFC history. Mark Munoz at the time was on a four fight win streak in the UFC and looked quite intimidating. He had not lost in two years. Chris was still green in MMA with only eight fights at the time. Undefeated, he was, but people thought this was going to be very competitive with a lean on the veteran Munoz. Munoz had only lost Matt Hamil at Light Heavyweight, and Yushin Okami via split decision. Munoz had not made it commonplace for him to lose or look out of a fight. Chris Weidman changed that with one of the most awe-inspiring performances in MMA history. The only offense offered by Munoz in this fight was a wild hook he threw while rising to his feet from being controlled on the ground followed by a blocked head kick in the 2nd round. The entire first round, he offered up zero attacks. Weidman manipulated him like a malleable ball, he moved, rotated and adjusted Munoz as he saw fit.

Let's take a look at how dominant Chris Weidman really was. The first takedown of the fight was the only takedown in the first round because he never allowed Munoz back to his feet. The timing was perfect here.

The sequence starts with Weidman pressuring Munoz towards the cage. Not many strikes were thrown in the first round. The main one is thrown between frames one and two, a roundhouse kick by Weidman that backs up Munoz. The kick is blocked, but sends Munoz backwards. As Munoz rebounds and returns towards Weidman he jolts forward and feints a hook but stops short. That's the first mistake. Weidman notices this between frames two and three and he starts dropping his level with the beginning of a shot. By frame four Munoz realizes he has overcommitted and is going to try and push Weidman off with his hands it would seem or maybe a dual tactic to defend an over hand. That does not stop Weidman. Weidman has his back straight all the while lowering his level until he explodes into Munoz's left leg in frame five. Maintaing good posture before the explosion makes it harder for Munoz to sprawl out. 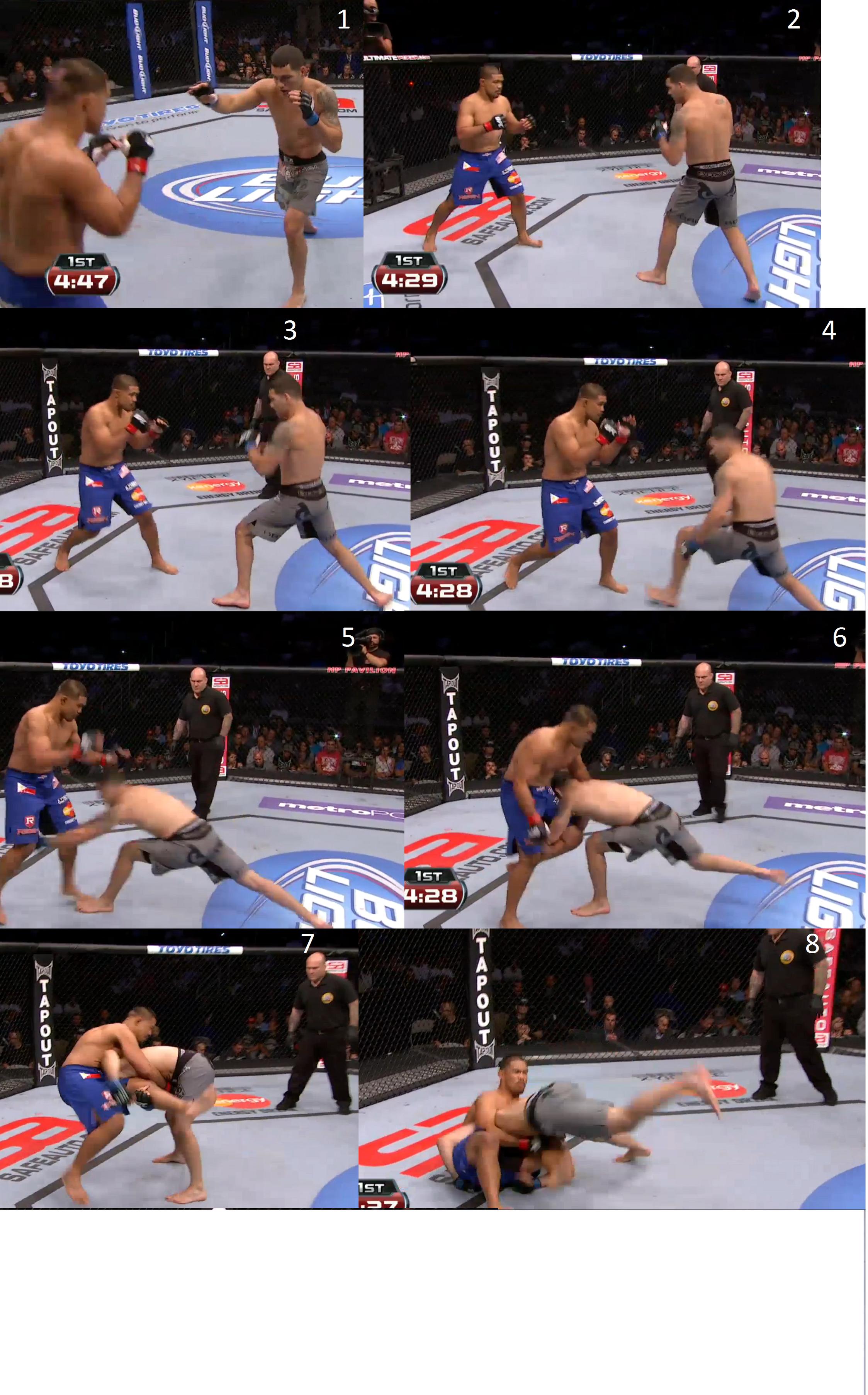 Weidman's left leg is at the center line of Munoz's feet. He is trying to make his left foot as far between Munoz's leg to create penetration into Munoz's base, and he does just that. Trying to complete a single leg without penetration increases the labor and burden of work for a mans back. Getting that deep footwork in allows the hips and legs to do more making it a more fluid effortless shot.

Now rewinding a bit, look at Weidman's eyes. Everywhere Munoz will go in this sequence Weidman looks their first. Your head and eyes are white guide you and it may seem something every fighter does, and they do not. This is good technique to guide your body with your head. From frame three Chris is looking slightly downward. At frame four he has clearly dropped his level and is keen on Munoz's leg. Frame five Weidman's gaze is piercing through Munoz's leg to the mat. Now Weidman will begin to turn a bit to create an angle and make it tougher for Munoz to defend. Frame six Weidman's head is behind Munoz and turned slightly to the right. In the final two frames Weidman elevates the leg in frame seven, and begins throwing his left arm over Munoz's hips. The transition between seven and eight illustrates this well. The reason for this is hip control. Munoz is notorious from trying to help over and suicide guys over with strength. Munoz even tries it two times in this fight alone. This allows Weidman to plaster Munoz's hips to the mat as he works for the pass. 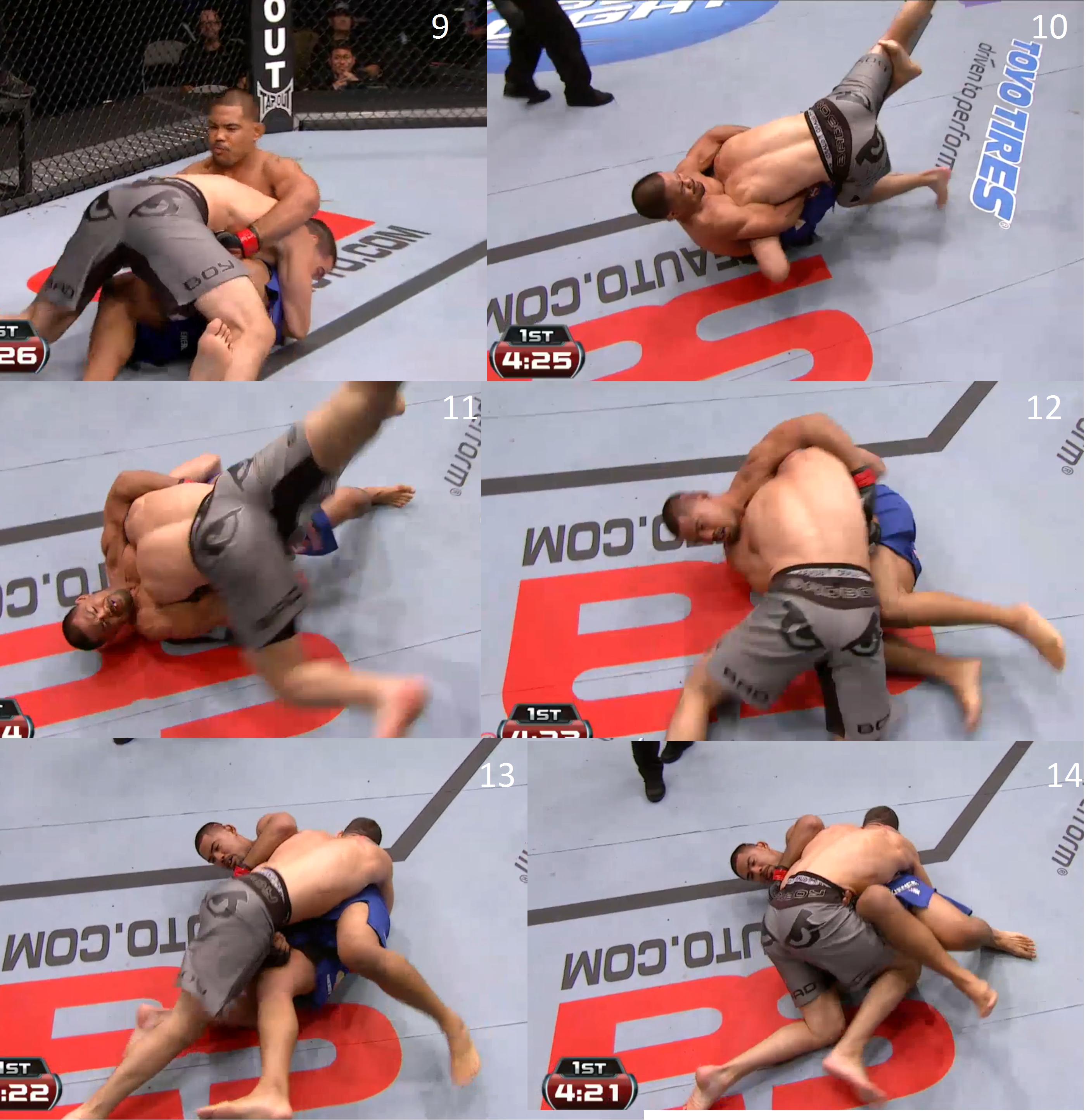 Following the motion of the takedown Munoz attempts to roll Weidman over. Weidman keeps Munoz's hips planted and goes with the motion per say and Munoz gets his guard passed like butter. When Munoz elevated Weidman's right leg Weidman just pops over it and ends in a loose side-control in frame twelve. Elevation is a keystone of getting an opponent off their feet, it take the lower end of their body and pulls it one way so the top half must follow. Weidman like any good passer knows allowing the opponent to their side creates space and that's not good for control or damage to the opponent. So Weidman in frame thirteen uses his left leg to shove Munoz's legs back flat as a wedge, and then slides his right leg in and closes the distances between him and Munoz. This removes the space between them giving Weidman a nice tight side-control. Munoz stays on the mat the remainder of this round and it all starts with an incredible single leg executed with perfection over an elite wrestler.

Come back for part two where we dive more into the dominance of Chris Weidman.