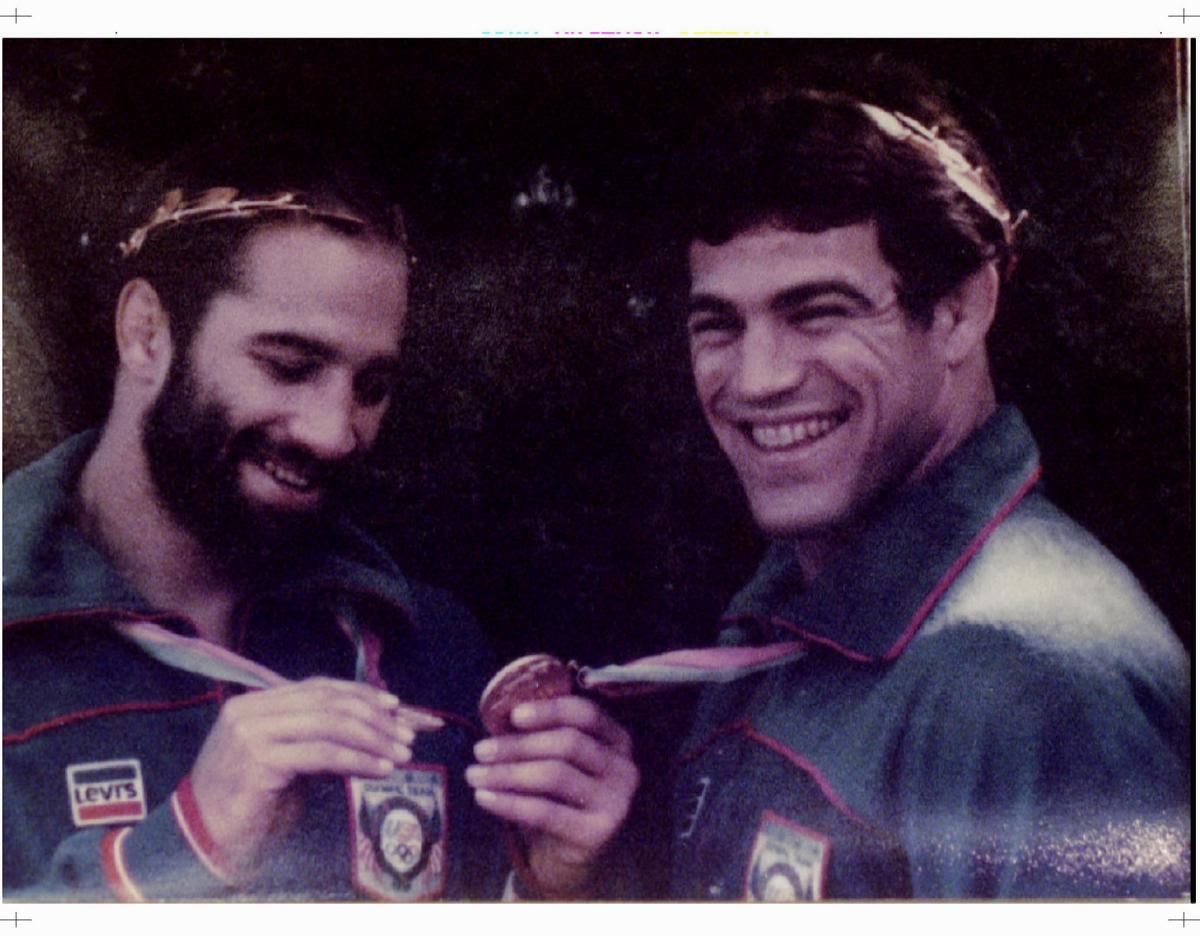 The Olympics of 1984 was a pivotal event for all involved, but especially the USA Wrestling team. With the USA boycotting the previous Olympics, the Soviet Union would follow suit this Olympics, making it a must win event for Team USA. Performing mediocrely here would reflect poorly and be magnified by the atmosphere. This is the year Mark and Dave Schultz would make their Olympic debut.

Mark spent 1983 dominating his way to another NCAA Championship at 177 Lbs. leaving him with a total of three titles when he graduated. The brothers got back together and focused their efforts on picking up medals for their home nation. It was tough as the transition from Folk to Freestyle is not an easy or seamless one.

Dave had already fully transitioned to Freestyle to compete in the 74 Kg. Weight class. This was and is one of the most hotly contested weight classes at the trials, and the Olympic gold. As with any weight segregated sport, the best athletes fall in the weight classes most men will generally fall in when fit. 75 Kg, is one of those weight classes. Dave was not one of those super athletes, he was the technician, the 'fox' the wrestling community was inspired by and loved. He was not the standard for the day or even now. Dave was just different in the way he moved on the mat, and it yielded results.

Both brothers would have tough journeys through the Olympic Trials for the 1984 Olympics, but Dave would have the stiffest of tests against Multiple time world champ and one of the only men to defeat Dan Gable, The Lee Kemp. This would follow the 1980 Olympics, where Kemp was prohibited from competing due to the boycott by the USA. In 1984 Lee would make a go at again against the hot phenom that was Dave Schultz. This is the video of that meeting:

(The video from flowrestling is not embedding on Sb nation. Click the link to go to the video if you do not see it here, sorry.)

In this match Dave uses Kemp's pressure style against him with the patented single leg defense with the Kimura that becomes a staple of both brothers arsenals, but especially Dave's. You first see Dave use it at the 41 second mark. This was a grueling back and forth match, but Dave takes momentum early, shifts it, and maintains his lead until the end with superior control and reversals.

Lee was and is a legend, a win over in that manner on this stage was astounding. Kemp was entering his late 20's but was still a young wrestler and an enormous force. A win over Kemp gave Dave the confidence he would need to take this all the way.

Mark would use this same technique in one of his early Olympic matches of 1984. This would be against the highly touted wrestler hailing from Turkey. A powerhouse of a wrestling nation, Resit Karabachak was considered Mark's biggest test and would have to take it to the European champion. Here are two videos from that match:

Now this was considered to be 'brutal' and illegal by many including the Turkish Officials. Regardless of the legality of the move Mark effortlessly performed the technique, and foreshadows his interest in adding submissions to his game, which he would pursue generously later in life. Mark would receive a disqualification loss in this match and would have to rally back if he was to win. This would motivate Mark more so to prove himself not a cheat. 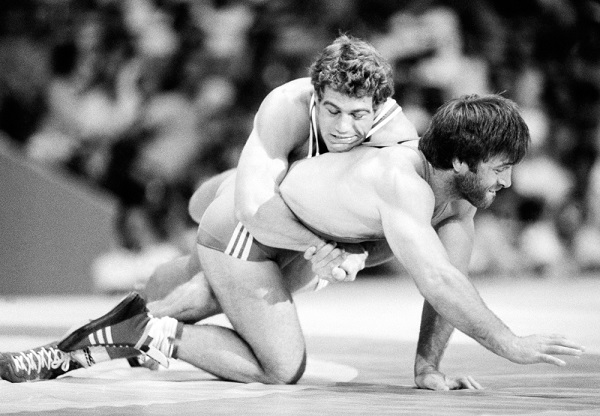 Mark Schultz, is on one knee as Italy’s Luciano Ortelli tries for a takedown at the Anaheim Convention Center in Anaheim, Calif. on Aug. 11, 1984. Schultz won the 82-kg bout by a full to advance to the gold-medal round. (AP Photo/Reed Saxon

Mark would do just that, fighting his way to the finals match against Japan's Hideyuki Nagashima. Once Mark got to this match his eye was on the gold, and his focus would not deviate an inch. Mark had to go through Nagashima, and through him he flew. Here is that match:

Mark would end up 'teching' Nagashima, meaning he got so many points unanswered by Nagashima they ended the match. A mercy out if you will. Not to slight Nagashima, but it was a one sided destruction and an awesome one at that. In the match Mark would execute beautiful single leg takedowns, double legs, and multiple 'gut wrenches' to clinch the gold medal for the USA. 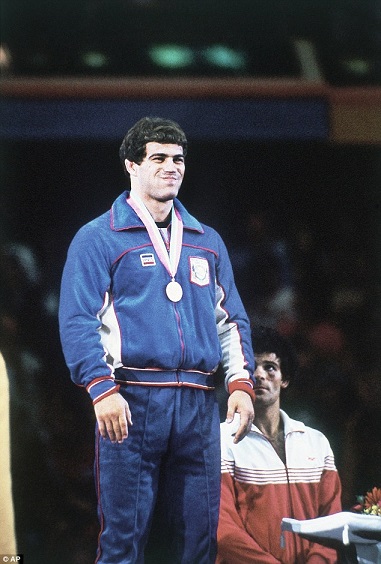 Winner: Mark Schultz on the podium wearing the gold medal after the Men's 82 kilogram Freestyle Wrestling at the Summer Olympic Games in Los Angeles, California, USA on August 12, 1984

Dave would have a much tougher journey and final match in comparison to his brother. En-route Dave would face Korea's Han Myung-Woo, Yugoslovia's Saban Sedji, and his final match against Martin Knosp of West Germany.In the matches previous to these Dave would beat Pekka Rauhala of Finland with a score of 9-1, a 12-0 victory over Zane Coleman of New Zealand, and lastly 12-0 victory over Romelio Salas of Columbia.

Just to verify how elite Myung-Woo was, he would go on to win the 1988 Olympic Gold in Seoul, South Korea and is currently the Executive director of the Korean Wrestling Organization.

In this match Dave gives Saban Sejdi a shellacking. Dave ends it with a pin quickly showing his dominance on the journey to the gold medal.

In the final Dave would meet West Germany's Martin Knosp in what would be one of his toughest matches. Knosp had a great shot and a no quit attitude, but Dave's signature defense was on the show that day. Dave gave up little to the German, but still felt is strength in a few of his shots blasting into Dave when he least expect it. Knosp had been just a step behind when the match hit the floor, especially with Dave riding him.

This would be an amazing year for USA Wrestling. America would take seven gold medals in wrestling, and two silvers.

The USA would place in all but one weight class, 52kg's.

Two pairs of brothers would win gold in those Olympics. The Schultz brothers and the Banach brothers. If you have not seen Ed Banach vs Mark Schultz for the NCAA championship please go watch it here, and read my write up on it.

This was a year that many of the Soviet nations, including Russia boycotted the Olympics. So many put an asterisk next to all the champions that year, but the world championships were the following year and those same nations would be there. It would be the last proving ground the Schultz brothers would need to give true weight to their accomplishments. Come back next time where we go to the World Championships, and a town in Georgia called Tbilisi.

Until next time, stay on the mats and keep chasing your dreams!