Note: To those who care: Part 9 can be found here:

In terms of raw violence, severe concussions and outright ridiculous moments, more shit happened in October 2013 than all of 2014 combined.

As to how my ass was kicked once again this month: I was still bitter from the Anderson loss to Weidman at the time and was hoping Junior would provide me and my wallet with a genuine feel good moment by reclaiming the Heavyweight title.

The exact opposite happened.

We start off the month with UFC Fight Night: Maia vs. Shields, live from Barueri Brazil and free on Fox - a gambler's dream as it's mostly Brazilian vs non Brazilian.

Despite his opponent tapping, tapping on the ref, sending out a "Tap" tweet and Morse code rendition on the canvas and screaming the word: "Tap" multiple times, Toquinho would apply more torque to the hold until he was pried off by the official.

In true Lennie Small fashion, Palhares would announce in his post-fight press interview that: "should he win Submission of the night, he will donate the money to Doctors without Borders".

Not a kinder gesture since Madonna and Jolie buying up all the orphans their housecleaning crews could integrate.

Even though he was the only fighter to win by submission on the card, Rousimar Palhares was denied the Submission of the Night bonus and promised additional punishment.

In spite of his manager protesting that his client was "being crucified in the court of public opinion" and really "doesn't mean to hurt anyone or anything. [He's] just trying to end the fight." Toquinho would end up released from his contract and banned from the UFC the next day.

Good riddance. This guy is habitual. I seriously think he had something to do with GSP saying he might retire after the Hendricks fight at the time:

"Aye do not want to fight dis guy! He crazy."

There are unconfirmed reports that GSP fears Palhares is a Grey.

Fabio Maldonado and Joey Beltran play a game of who can block the most punches with their face for three rounds. Maldonado earns a questionable split decision and has the ability to pee straight knocked out of his brain for good.

In a fight that went on for far too long, a wheezing, overweight, out of shape Thiago Silva pummels Matt Hamill, who was coming out of retirement, for three rounds and looks horrid in the process. 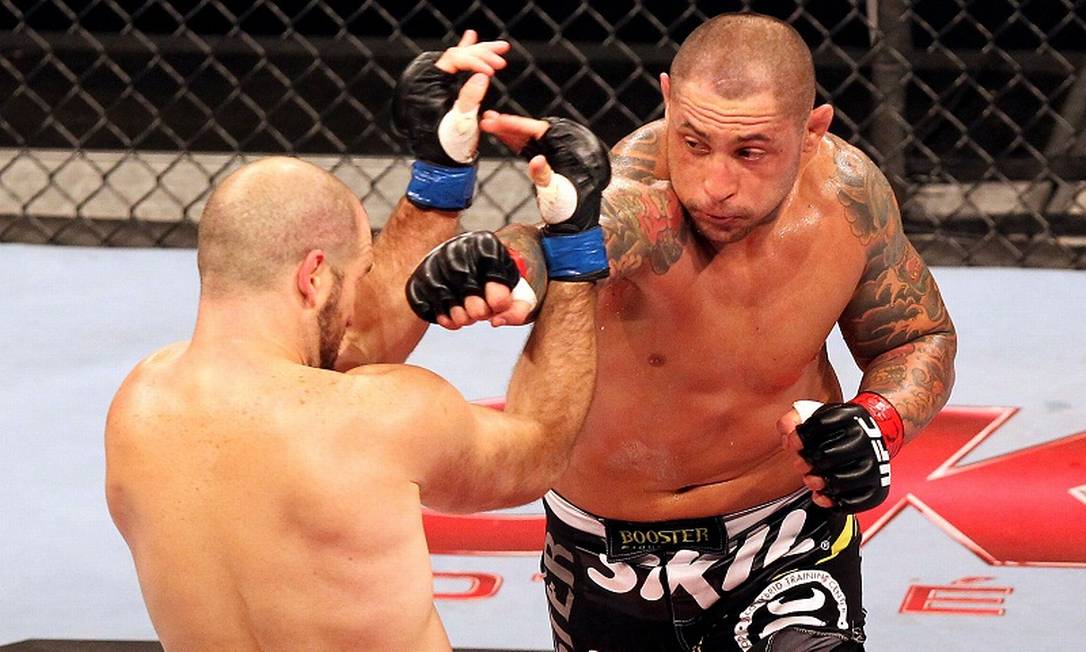 This was hard to watch.

Even the crowd felt uncomfortable.

By the end of the first, the Vai Morrer and Silva! chants had ceased, like everyone in attendance came to a collective agreement:

This was the last time we saw Thiago Silva in the UFC and heard from Matt Hamill.

In the co-main event of the evening Don Hyun Kim knocks Erick Silva out cold and makes Joe Silva jump out of his seat like it was on fire.

And in the main event, Jake Shields neutralizes Demian Maia and announces that he sees himself in the title picture at the post-fight press conference. He must surely be talking Photoshop or a Sears portrait with a replica belt.

Not a big fan of Shields. He makes Francis Carmont look like Carlos Condit.

I wouldn't mind seeing him against Palhares... but it's for malicious reasons.

I had quite a lot of friends over with their wives for this one. Even non-fight fans are intrigued by the notion of a heavyweight title fight and that was my selling point.

Since the wife only " let's me " (who am I kidding, no quotes are required here) host event where GSP, Anderson or Junior are fighting, I try to get as many people as I can to come over for the occasion.

Everyone is fed, everyone has their drink and...

After a Facebook preliminary card consisting of all quick finishes and an undercard on Fox Sports 1 where Hector Lombard annihilated Nate Marquart in the first, it's onto the main card where:

Gabriel Gonzaga overachieves and knocks out Shawn Jordan also in the first.

In a fight that actually made the women (and some of the grown men) in the room cover their eyes and wail, Gilbert Melendez defeats Diego Sanchez by unanimous decision.

Seriously, look at this cut: 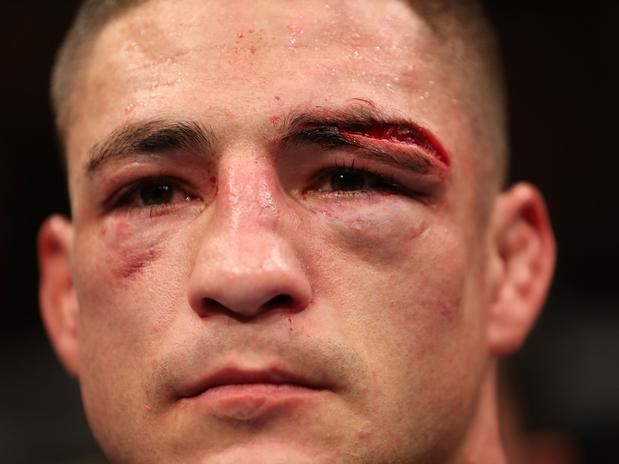 Even the cutman in between rounds was overheard saying:

"Hey man, what the fuck you want me to do here? I don't have enough Vaseline. This bastard needs staples and plaster to fill that gash".

What's even more baffling was that when the doctor was asked to take a look at it in the third, his verdict after 5 seconds of mental deliberation was:

While I do not think that the cut inhibited his vision, his face was split in two and that has to be worth something.

Poor Diego, he lost the fight, an eyebrow and half of his brain cells. He had to borrow a few from Jake Shields which is like borrowing piss for a drug test from Chael Sonnen.

Did you hear his post-fight interview in the octagon? He's awfully punch drunk already and he's only 30.

In the co-main, Daniel Cormier outclasses an even more out of shape than usual Roy Nelson for the unanimous decision.

And now it's time for our main event of the evening.

The fighters have made their way to the octagon.

As Junior was getting ready to perform his signature pre-fight finger point during his introduction by Bruce Buffer, Cain goes Puro Vato Loco and decides he'll have none of it: 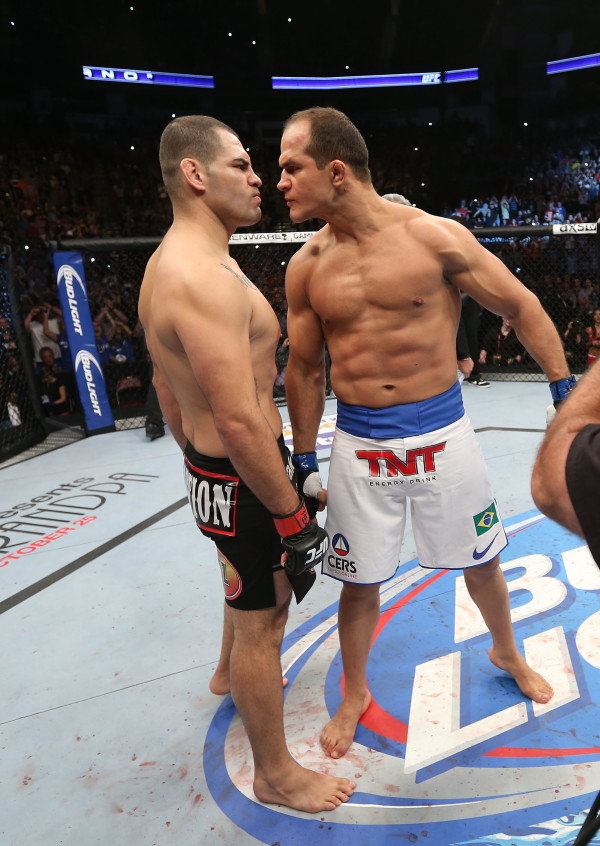 A bad omen for things to come as this was yet another hard fight to watch.

Quite frankly it should have been stopped in the third. At the end of the fourth, my wife got up and said: "I can't watch this again." and left.

I don't blame her.

She had seen five rounds of this the year before: 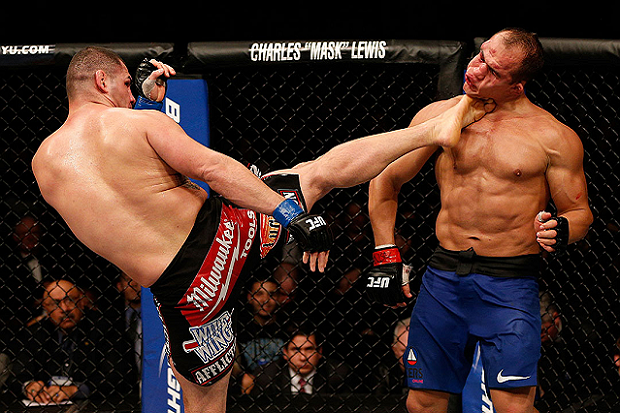 and was now being subjected to that: 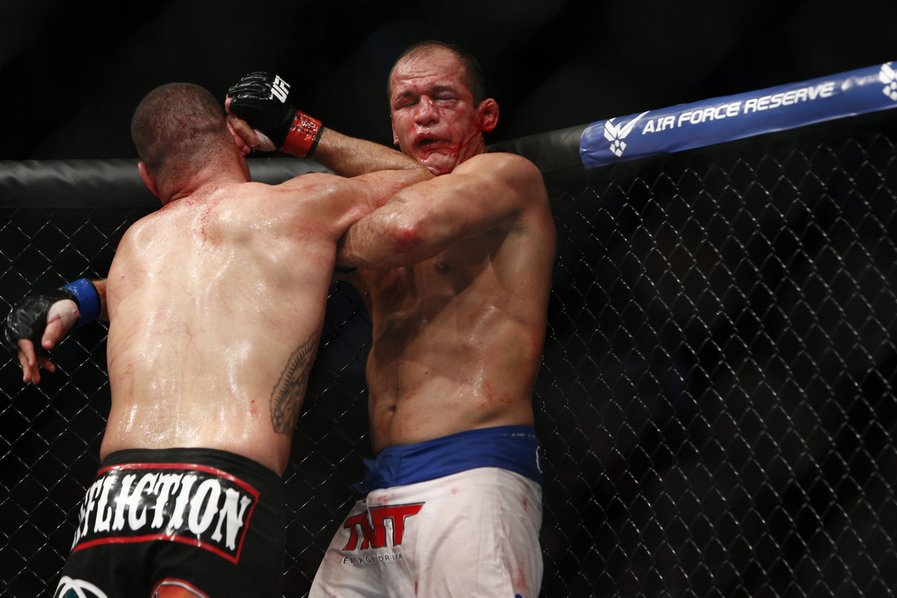 To be honest, it's pretty remarkable that JDS had the exact same game plan. Stand and throw wild punches. Stand with back to cage. Get hit a lot and barely move.

It's mind numbing how little he adjusted. Cain basically put the hurt on him in the form every possible strike and takedown imaginable in the UFC.

Junior could have been finished a ton of times. Cain's face showed a lot of damage though so he did hit back.

The fight ended on a weird note too.

JDS attempted a submission late in the fifth, lost it and then immediately crashed forehead first to the canvas in a hopeless " Fuck this shit! " moment.

Herb Dean finally waved off the bout in what can only be called a mercy stoppage.

To sum it up: In what seemed like Groundhog day, Cain once again demolished and re-purposed junior's face into a human Shrek mask with extreme prejudice.

Shame on me for doubting the voracity of Velasquez.

Now if only he could stay healthy. In the last 4 years his only opponents have been Brock Lesnar, Antonio Silva and JDS.

***
1 week later we are treated to another free event in the form of UFC Fight Night Machida versus Munoz, live from Manchester, UK.

The event was expected to be headlined by a middleweight bout between top contenders Michael Bisping and Mark Muñoz. However, Bisping pulled out of the bout with an eye injury and was replaced by Lyoto Machida.

In the only fight that seemed to matter on this fun little card, Lyoto Machida decapitates his friend and training partner Munoz with a head kick for the win. He then proceeds to hug him and take him out for a meal. 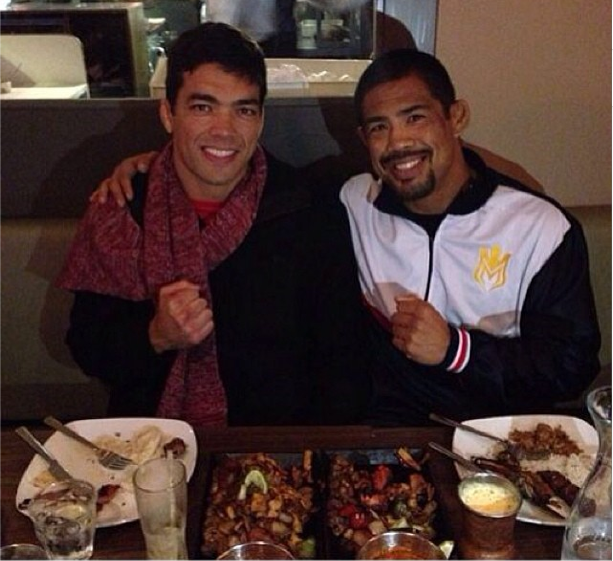 The UFC officially announces that after Sonnen fights Rashad Evans at UFC 167, he'll head to Brazil to coach against Wandy in the third edition of The Ultimate Fighter: Brazil. Following the series' completion Sonnen and Silva will meet in an as yet undetermined UFC event.

October 14th 2013 : With November 2nd fast approaching and despite having announced this event in August, only 1700 tickets have been sold for Bellator's Rampage vs Ortiz PPV. Note that the Long Beach Convention Center is a 13,500 + seat arena and that tickets range from $51 to $265

October 25th 2013: In a not so unexpected turn of events, Tito suffers a neck injury in training and pulls out of the event.

In what can only be called Karma is a bitch (see his fight against Belcher) and after making fun of Munoz's bout with depression, Michael Bisping suffers a detached retina and has to withdraw from a Manchester homecoming four years in the making. 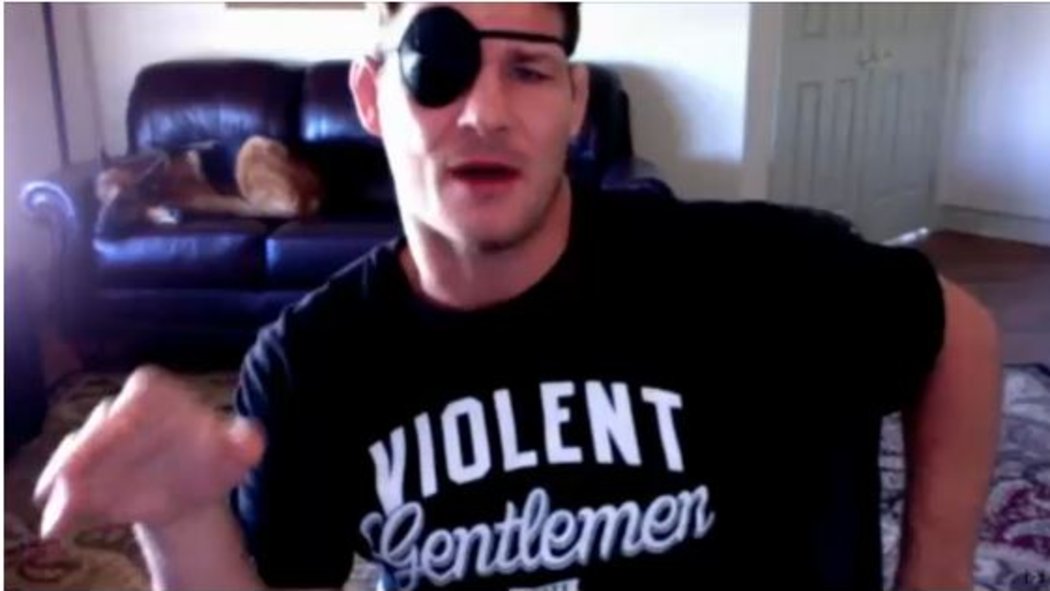 "For the last time I'm not a focking Pirate!"

UFC Primetime St-Pierre versus Hendricks airs. Why I am not intimidated at all Hendricks? I know he could kick my ass, but I've seen scarier kittens. He just irks me with his stupid hobo beard and the fact that he uses a water bottle as a spittoon during post-fight press conferences.

I want to douse gas in his face and throw a match.

It was scientifically proven that he had over-trained last time. The difference now is that we have help from professionals. We are following what doctors tell us to do. Team Dos Santos has replaced a traditional training regimen with state-of-the-art sports science.