Note: To those who care, Part 2 can be found here:

Ah, March in La Belle Province… where the weather can only be described as slightly warmer than Hoth.

This month, 2013 not only kicks my @ss, it fucking spits on me and walks away after.

March 2013 was so epic, this post could have very well been called: Why 2013 Kicked This MMA Fan’s @ss Part 3: The Ides of March, but Nick Diaz was fighting this month, so you understand my little Fanpost title conundrum…

Also, since I saw UFC 158 live at the Bell Center, there will be some pre-show shenanigans included in this post. This is after all how 2013 kicked my ass, not yours, so consider yourself warned, this might be a long(er?) one.

I have a confession to make: I like gambling.

In fact, I like gambling so much I’d bet on 2 old ladies crossing the street. I don’t bet huge, but I do place bets on every single UFC event and never said: "No" to a Poker game.

That being said, when I took a look at the free Silva vs Stann on Fuel betting sheet, I vividly remember thinking:

I also remember that one of my friends, who was barely a casual MMA fan at the time
(he is one now... we're making progress), was over at my place that day.

He knew about the sport and had seen a couple George St-Pierre cards before (because we are Montrealers and not loving GSP here will get you dipped in scaling Poutine sauce and catapulted into Ontario) and that’s’ about it.

I plainly asked him if he minded watching the free fights over a few drinks and perhaps a little Rosenthal (More on that in: Why 2013 Kicked this MMA Fan’s @ss Part 4: April: 1,356 Plants, Aliens and Sonnen 3:16: I Just Broke your Toe).

He likes fights, he likes Balvenie so: " Bah! Twist my rubber arm!" was the answer and…

Here we go! (God, I hate you Golberg)

After getting his head hit by Mark Hunt for 3 and a half rounds, Sefan Struve forgetting that keeping it standing with a bigger and meaner opponent can (and usually does) result in a Skyscraper being transformed into a super-long, 1-storey building, lets Mark Hunt get up so he can partake in a stand-up battle with the laconic Samoan.

And then… before my friend’s neophyte eyes…

Mark Hunt does this to Struve’s jaw: 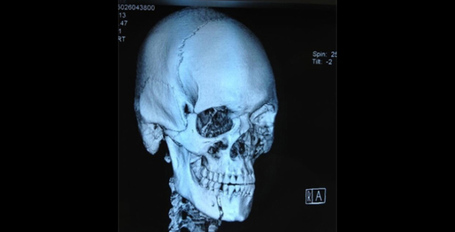 And casually walks away with what can only be described as a: "Yeah, I just fucked up your face." look.

To this day, I can still hear my buddy’s PTSD-addled voice:

As if that wasn’t enough. Wanderlei and Brian proceed to compete in what can only be described as a Vortex of Chaos. My buddy goes Full Quebecer and lets out a:

"Hahahahahaha! Quessé ça Tabarnac!?!" (Translation: "Hahahahah! What the fuck is this???").

Ladies and Gentlemen, it’s March 3rd, 2013, and we now have our first Fight of the Year candidate.

And MMA now had a budding fan. As the Dana (works best if said in Anderson Silva’s voice) would say: "infected by the UFC virus."

Note: The build up to this fight was something akin to Flight over a Cuckoo’s Nest and deserves a review.

What started off as a Gentle and Docile Nick Diaz at the first press conference in early January ("I like George! I like Georges just fine! Ha! Ha!") went right back to Regular Nick Diaz on the next audio conference call, where Nick went "Full 209" and started talking slang to the very perplexed French Canadian champ.

The aforementioned conference call could have not been more unintelligible had the two fighters spoken Klingon and Swahili to each other.

I remember Nick telling Georges he was pampered.
Only to faintly hear Georges ask someone in the background:
"What’z he talking about ze Pampers? I no wear no Pampers!"

So. Many. Quotes. That audio call it should have its own Fanpost (I'd rec it) .

I urge you to check it out for yourselves, well worth a read (just don’t do it in public, you will laugh out loud).

At the press-fight conference, Nick explains that he skipped the pre-fight workouts to: "get rid of ‘toxic water’ that you gather in your body (I assume he means urine) when you’re flying" and then, in what can only be a pre-emptive strike, he smirks like a kid who farted in church and apologizes if he fails a drug test for marijuana this time around, but thinks he should be fine this time due to the way he’s prepared!". He also introduces the term "Wolf tickets" into the MMA vernacular (God, I miss this man).

After Friday’s weigh-ins (that were much tamer than I thought), it’s Saturday evening and…

Here we go! (God, I hate you Goldberg)

IMPORTANT Note: What follows is a play by play of the Bell Center.

You can skip to the RESULT section if you want, but there’s a tip on how to sneak booze into Canadian UFC events. Yes, this also works in Toronto and will be covered in: Why 2013 Kicked this MMA Fan’s @ss Part 9: September: Bones Gets Mauled.

A friend from Vermont, a friend from Ottawa and 2 of his buddies made the trip and we are joined by a colleague of mine.

He’s a 6"4, friendly, mountain of a man (whom I affectionately call Gigantor), who had seen GSP-Condit in November the year before with this very group.

Just like last year, we have a nice steak dinner downtown (Houston Steakhouse), then proceed to the Liquor Store, where we each get a 12 oz, plastic bottle of our favorite poison (I chose Captain Morgan Black).

We walk to the Bell Center and, like always, they are giving out free NOS energy drinks outside the building.

Just like last year, we pack Gigantor with 3 cans (1 in hand, 2 in coat pockets) of NOS Energy drinks and proceed to enter the Bell Center with him leading the way, forcing himself to drink the vile liquid.

Right on cue, like sharks smelling blood in the water, the geriatric Bell Center ushers charge Gigantor and, in our usual "Leave every man behind" strategy, the rest of us casually walk right past him and go straight to our seats.
He joins us a few minutes later with a big smile.
Mission Accomplished.

It’s 7:04pm, T.J. Dillashaw has just destroyed Issei Tamura and the first "Fuck you Di-Az" chant is heard in the Bell Center (and would remain a fixture for the rest of the event).

Note: In December 2010, at my first Live UFC Event, the first (loud!) "Fuck you Kos-check" chant started 2 minutes into the first prelim fight - Truth! (and would remain a fixture for the rest of the event).

Note 2: Carlos Condit did not get that treatment in 2012.

The Juggernaut destroys The "Great" in a fun little fight

Carlos Condit wins over Montreal in defeat. Hendricks? Not so much…

and GSP does absolutely whatever the hell he wants with Diaz for 5 rounds.

GSP and Diaz hug it out and then proceed to clear the air at the post fight press conference... NOT!

Among the myriad of comedic Diaz gems (too many to enumerate), like fighting Anderson Silva, sketchy hand wraps and saying" I'm not making excuses" just before making an excuse, he provides me with a signature of my own on SB NATION :).

He later directly tells Ariel Helwani that he’s most likely retiring unless he rematches GSP… and "Georges hits like a woman."

Dana: Hey Anderson, I got a fight for you this summer…4th of July weekend.
Andy: Nick Diaz?
Dana: Shut the fuck up Nick Diaz. I’m not even sure the fucker is coming to Montreal. You want me to book him 2 times in a year and expect him to show up? Get the fuck out of here.
Andy: You right boss. Georges, I fight him then?
Dana: Not right now. Georges doesn’t want it right now.
Andy: This is makes me sad.
Andy: Is it Okami? He Asian you know.
Dana: Really? Are you serious? He shits himself and pees on the floor when he sees you on TV or someone mentions your name. No, it’s not Yushin fucking Okami, Anderson.
Andy: For serious? He scared. That is funny.
Andy: Is it Jon Jones?
Dana: Still working on that. Maybe in the fall. Jon just had a kid.
Andy: I like the childrens.
Andy: What about the Chael? Is it Chael? I like him too.
Dana: No it’s not Chael. He likes you too apparently. He’s Mr Fucking Nice Guy now. He likes everyone.
Andy: Then who Mr. Dana? Who is it I fights?
Dana: Chris Weidman.
Andy: You have a cold boss? You sneezes?
Dana: Chris Weidman. The guy is a rising star.
Andy: Rick Weisman? Mr. Lorenzo’s accountant? Why I fight him? He no fighter.
Dana: Not Rick Weisman, not a fucking accountant. Jesus. Chris Weidman. He beat Mark Munoz.
Andy: Who? Mack Minus? Does he work for UFC?
Dana: Mark Munoz. He’s from the Philippines, like Manny Pacquiao. The fight is against Chris Weidman. He also beatAlessio Sakara.
Andy: I don’t understand your words.
Dana: He’s also beaten Jesse Bongfeldt.
Andy: Is that what Joe Hogan use to smoke the dope?
Dana: No. That’s a bong. This is a man.
Andy. Hmmm. If you say so, but I don’t think that.
Dana: He’s also beaten Uriah Hall. He’s on TUF right now.
Andy: …
Dana: Seriously. You’re being a dick. It’s not my fault Bisping fucking loses every time he’s close to getting a title shot. Why don’t you call him and bust his nuts? I’m fucking tired Anderson.
Andy: Many sorries. Ok. So This Charles Rideman I fight, who else he beat?
Dana: Chris Weidman. How the fuck do I know? He beat Tom Lawlor.
Andy: I no fight this Cristos Weidleman. He no one.
Dana: Seriously. Fuck you Anderson. I just bought you a Bentley. Do you want to fight Forrest Griffin or Rich Franklinagain?
Andy: No. I hurt them and it hurt me to see them in pain. No good. Ok. I go for fight against Chad Weisman.
Dana: Chris Weidman!
Andy: Yes! I fight him too.

(Sorry folks, If my nickname for Ronda Rousey in "Why 2013 kicked...Part 2" got me an Official Warning - these two jokes were g-u-a-r-a-n-t-e-e-d Insta-Ban, and I now kinda feel like I'm walking on thin ice as I'm writing these...)

Chris Weidman tells anyone willing to listen that he will dethrone Anderson Silva and offer him an immediate rematch in Madison Square Garden. Collective laughter ensues and at this point, Anderson is still under the impression that Chad Weisman is the most baffling accountant of all time.

Georges St-Pierre actually goes into specifics on how Weidman will dethrone Silva and his apt premonition plants the seed of truth regarding his alien abduction theories of lost time.That topic will obviously be discussed in: Why 2013 kicked this MMA fan’s @ss Part 4: April: 1,356 plants, Aliens and Sonnen 3:16: I Just Broke your Toe.

As if breaking Stephan Struve’s jaw a mere 5 days earlier was not enough, when asked by Ariel Helwani if he'd be willing to fight Junior Dos Santos at UFC 160 after an injury forced the mighty Horse-Eater out of the bout, Hunt replies:

"If I get the call for the fight, I'm there, of course, and the fans are crazy for it, so it's good. Sounds like a pretty good idea to me. I'm not injured. I'm always down for a battle. I was born down. You know this."

I love this man, it’s like Brute Strength and Not Giving a Fuck made a child.

I realize my posts may seem a little UFC-centric. Unfortunately, they are. There will be some mention of other organizations and non-UFC fighters. However, there are only so many moments I can recall (with the remaining braincells I haven't killed off with alcohol) and in case you haven't noticed yet (or still don't believe me), 2013 done treat me like Adabesi did Peter Schibetta.