Bellator bantamweight champion Eduardo Dantas (15-3) will attempt to successfully defend his belt for a second time when he collides against 2013 Summer Series tourney winner Rafael Silva (21-3) in the headlining bout of Bellator 111, which takes place March 7 at the WinStar World Casino in Thackerville, OK.

In addition, the night's Spike TV main card will feature the opening round of season 10's eight-man heavyweight tournament.

Bellator officials announced the news on Thursday, confirming a previous report by MMAFighting.com.

Dantas, 24, is undefeated in five Bellator contests, having stormed through season five's bantamweight tourney then dethroned former champion Zach Makovsky via second-round arm triangle choke. After losing to Tyson Nam outside the promotion, Dantas rebounded by knocking out Nova União teammate Marcos Galvão to defend his Bellator title in early 2013.

"I've said all along I want to prove that I'm the true Bellator champion, because being the Bellator bantamweight world champion is the achievement of a dream for me," Dantas said in a statement. "Rafael and I are friends, but Marcos Galvao and I are like brothers and I know I had a job to do then, and I know I have a job to do now."

Across the cage, Silva, 28, looks to extend his torrid 13-fight win streak, which included back to back victories over Rodrigo Lima and Anthony Leone to take home the grand prize from Bellator's 2013 Summer Series bantamweight tournament.

"I love Eduardo Dantas as a fighter and as a person," Silva said. "We are good friends and I always cheer for him when he fights. I really like this guy. As a fighter he is as good as someone can be, but I know what this fight means to me, and nothing is going to get in the way of that. Nothing."

Elsewhere on the card, the four quarterfinal match-ups for Bellator's season 10 heavyweight tourney are finalized.

Opposite them, Bulgarian Sambo champion Blagoi Ivanov (9-0), who nearly died after being stabbed in the heart in 2011, will take on season seven finalist Rich Hale (21-6), and Mark Holata (12-4) will lock horns with former Bellator champion Alexander Volkov (19-4).

"I am ready to get back into the tournament and get my belt back," Volkov said. "I have continued to make improvements in my game and I will prove to the fans why I am one of the best heavyweights in the world. Nothing will stop me from getting the championship belt back." 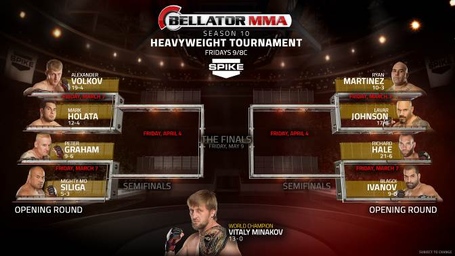