It's 2014 and the World Series of Fighting (WSOF) is coming out swinging.

As the organization gets prepared to stage their eighth event on January 18th, WSOF Executive Vice President and Matchmaker Ali Abdel-Aziz joined Ariel Helwani on Monday's The MMA Hour to start the new year off with a bang. His idea? WSOF has formally challenged Bellator to have WSOF's best fighters take on Bellator's best in a 'winner take all' pay-per-view event.

"Listen, a lot of people said Bellator number two and a lot of the media said Bellator is number two, but I believe it's all about winning. If we line up nine of our guys and nine of their guys, I believe we'll win,' Abdel-Aziz said.

"We are number two, strong number two," he continued. "At the end of the day, it's about the fighters and the fan. It's the entertainment business. We're here to entertain. Honestly, sometimes I get people saying we're number four. Some people put Invicta before us, but I can prove everyone wrong by doing something

"Officially on your show, I will challenge Bellator, live on pay-per-view, ten fights - nine-fight challenge, one super fight."

Abdel-Aziz didn't offer a date or location, but said the 'winner take all' aspect of the bout was that the organization who was proven to be superior - something Abdel-Aziz didn't establish - would keep all gate receipts and pay-per-view revenue. He also said any fighter who wished to crossover from Bellator to WSOF, win or lose, would be able to make the move as far as they were concerned.

The fight card as Abdel-Aziz proposes is as follows: 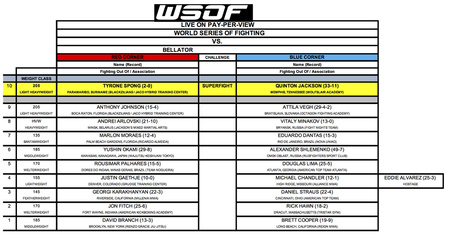 Notably, champions and top talents from both organizations are missing. Bellator's Patricio Freire is absent as is WSOF's welterweight champion Steve Carl, among many others. Abdel-Aziz said the card was designed to serve a purpose, but also to maximize entertainment value.

As for whether Bellator would be interested in the proposition, Abdel-Aziz doesn't know. As he sees it, though, Bellator should be receptive to the idea because they and their fighters could benefit from the exposure.

"I think Bellator has some great fighters, but they don't get enough exposure. When was the last time you saw a Bellator guy doing an interview or on your show? They only come on your show when they have problems with Bellator, but we're willing to give them some exposure, win live on pay-per-view, winner take all."

Abdel-Aziz further argued that if the two largest MMA organizations outside of the UFC put their efforts together, it'd be beneficial for everyone: the fighters, the fans and the sport itself. He claims while attempts to do event vs. event have failed in the past, there's no reason to not try again.

"It's great for everybody if we want to grow the sport," he continued. "If we can put on a megashow like that and entertain the fan, why not?"

Still, at the root of WSOF's efforts appear to be a strong dislike of Bellator, some of their alleged business practices. Abdel-Aziz wouldn't go on the record about what issues he had with the Viacom-owned organization, but claimed they were unfair and underhanded.

"I like Bellator, but I don't like certain people in Bellator," he elaborated. "They recently did something very disgusting and very dirty. They tried to take something that's not theirs." Abdel-Aziz suggested he'd reveal what that was at a later date and suggested Spike TV, Bellator's television outlet, might not even know about it.

He also noted the saga with Bellator lightweight champion Eddie Alvarez is a cause for people, especially fighters, to give WSOF a second look. Abdel-Aziz underscored his point by listing Alvarez on the side of the proposed WSOF vs. Bellator card with a label of 'hostage' under his name.

"One of the things we will never do is keep as guy who doesn't want to be in World Series of Fighting. For example, if you go to war and you get caught in a crossfire, you can't be torturing and shooting people because they're prisoners of war. You have to go by the rules. I believe Eddie Alvarez is a hostage.

"It put a lot of questions in fighters' mind. 'Do I really want to sign with this promotion?' It really made a lot of people scared," he said.

Perhaps most importantly, this is about market share and their place in the MMA world. Abdel-Aziz argues WSOF is the actual number two even if Bellator has claimed that label in the popular impression of the MMA community. An event like this, he suggests, can shape perception back to the reality he believes actually exists.

"I want people to stop saying we're not number two because I believe we are number two. Look at our fight card. They have great fighters, but you can't bring in Brazilian and Russian fighters to try to market them in America. I think we have a lot more Americans."

MMA Fighting attempted to contact Bellator to obtain a comment via email, but has not received a response at the time of this writing.

'I'm not trying to get attention. This is real," Abdel-Aziz insisted about his and his organization's challenge. "I really mean it and the winners are the fans and the fighters."