It's hard to remember now after such a dramatic winter, but at one point 2013 was looking more like a year of stagnation than any sort of sweeping changing of the guard. By the beginning of July, eight UFC belts had been contested, and eight UFC belts had been successfully defended -- the third longest such streak to kick off a calendar year in UFC history, and longest since Couture dethroned Randleman deep into November 2000.

But little did we know, the summer winds of change were rising from the east, and boy, they were a blowin'.

Realistically, Chris Weidman was never even supposed to be here. He was the intriguing but unknown contender, a last option only considered after the line cleared away. One by one, Michael Bisping, Luke Rockhold, Rashad Evans, a few superfights, and the UFC middleweight division generally self-imploded, until somehow the consensus settled on the last man standing -- an unbeaten American, one saddled by a year-long injury layoff and still reeling from the unexpected devastation of Hurricane Sandy.

Though this kid from Long Island, he had a certain way about him. Chris Weidman was never just happy to be there. Despite the scoffs and stifled chuckles, he vowed, unequivocally, to defeat the undefeatable Anderson Silva. No frills, no promos cut straight from the mouths of late-70s pro wrestlers. Just a simple promise. He was such a nice guy, he even extended Silva the kindness of a preemptive immediate rematch (in Madison Square Garden, of course).

Weidman vs. Silva I

As the weeks went on, a strange feeling began to emerge out of Las Vegas. The middleweight belt hadn't changed hands in seven dazzling years, but that didn't stop a parade of professional fighters from picking the upset. Silva cut puzzling, often bizarre interviews, giving off the air of a 38-year-old man who, if he wasn't tired of the game, was certainly bored by it -- even handing his strap to the American for a pre-fight photo opportunity. And all the while Weidman just stood beside the spectacle, quiet and confident, soaking it all in as if he knew something the rest of the world didn't.

But even he couldn't have expected what was to come. Anderson Silva, nine months removed from his cagewall wizardry against Stephan Bonnar, stretched his theatrics to a new level that balmy July night. He dropped his hands, he slapped his thigh, he urged Weidman to throw out his best shot. Once Weidman complied, Silva just grinned. He shook his head and beckoned for another, go ahead son, try again. He kissed Weidman's cheek at the end of the first round, then turned back to rant and rave at the American across the cage. The scene was inexplicable, and if you didn't live through it, there's no real way to explain what those few minutes felt like.

But even the greats are mortal. Even the best can fall. And Silva, well, he simply took it too far.

A minute into the second round, Silva ate one left hook, jiggled his legs in feigned distress, then ate another. Undeterred, Weidman followed with a right. Silva rolled away from it, but Weidman flicked his right hand back out. Such an arbitrary motion, a punch with no real power, no bad intentions, yet it was the catalyst for the end of an era. His timing thrown off, his hands by his hips and his spine bent backwards in disdain, Silva rolled to his opposite side -- only to be met by a shot that will be replayed into infinity.

Weidman caught Silva on the jaw with a devastating left hook, dropping the legend instantly, then finished the job with a brutally efficient series on the ground. An inglorious end to a near-mythical run if there ever was one, but those who pray for happy endings in this cold world are often left disappointed. Silva's reign was over. Welcome to the era of Chris Weidman, UFC middleweight champion. 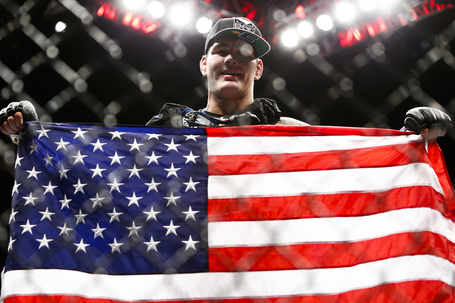 Look folks, 2013 was a wild year in MMA. I don't need to tell you that. So much has happened, and we're in such a different place now compared to where we were when January 2013 rolled around, that it's easy to forget how utterly ridiculous certain moments were when they played out in front of our eyes for the first time. But 11 months ago, when Antonio "Bigfoot" Silva unleashed a blinding rage upon Alistair Overeem, vengeance for months of slights and smirks manifested in old-school Fatality form, if you were looking for the year's biggest ‘holy s--t!' moment, you found it.

"Bigfoot" vs. Overeem round 3

The seeds for this one were planted early. Silva wasn't just a 4-to-1 underdog, he was "one big, huge walking target," a man who Overeem promised to make "a number on my list, a statistic" on the road to his eventual UFC title. And for two rounds, Overeem made good on his words, controlling much of the action and stifling Silva within the clinch. But something changed once that final frame started, and ten seconds in, it was obvious we were about to witness something special.

Instead of backing down, "Bigfoot" collided against Overeem in the center of the cage, then shucked him away and launched into a furious onslaught of blows. One flurry connected, then a head kick. Suddenly, unbelievably, Overeem was on his heels. In came the right hands, one after another barreling straight down the pipe, until a pair of savage uppercuts found their way through, dropped any remaining defenses and opened up the floodgates.

15 brutal unanswered blows to the head later, Overeem was down -- eyes foggy, movements slow; any smugness abruptly beaten out of him while a raging giant loomed overhead, held back only by a stunned Herb Dean. Silva roared for Overeem to continue, but it was over. The last word is often the harshest in our sport. So it goes. Justice at it's finest. 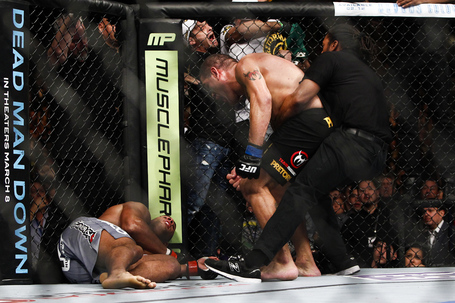 Ah, Vitor Belfort. The man who emerged from South Florida with the feral mohawk and vein-bulging comic book physique, then proceeded to own 2013 with three of the most terrifyingly violent, unnervingly efficient displays of martial arts prowess we saw all year. Whether it was Michael Bisping learning the hard way, Luke Rockhold erasing any doubt, or poor Dan Henderson and his ill-fated 77 seconds, I think it's safe to say, Vitor Belfort learned how to throw head kicks.

You can argue the merits of TRT until you're blue in the face, but after everything we've seen this year, one truth is undeniable: At the age of 36, the Old Lion is the strongest he's ever been. Any of his three 2013 masterpieces would be well-suited for this list. One in particular, though, stands above the rest -- and for that we travel back to the main event of UFC on FX 8, where fresh off dismantling one No. 1 contender, Belfort looked for lightning to strike twice against former Strikeforce champion Luke Rockhold.

This time, it only took two minutes. With a Jaraguá do Sul crowd thirsty for blood, Belfort gave the people what they came to see. Take it away, Jon Anik: "As we've seen out of Vitor Belfort, often times all it can take is one slight crack, one slight opening, for his opponent to be twitchin' on the canvas... AND THERE IT IS!! AND THERE IT IS!!!" Foot meet Head. Head meet Canvas. 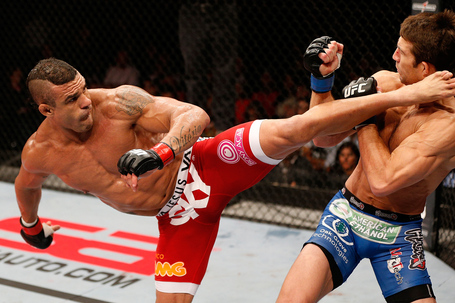 A fighter's first post-fight tweet is often a good thermometer as to how their night went, whether it's happily thanking fans and teammates for their support, or vowing to pick up the pieces and learn from painful mistakes. So in that regard, Stefan Struve's first words post-UFC on FUEL TV 8 were pretty telling: "I wanted Herb (Dean) to take the tooth out of my cheek and continue, but then it turned out my jaw was broken."

And thus we move to No. 4 on our list, taking us back to the night 5-foot-10 and 7-foot collided inside Japan's Saitama Super Arena, arousing the ghosts of freak show fights past with one ferocious display of violence. It was early March, and to say both titans were exhausted would be an understatement. But with 11 minutes in the books and the scorecards tied at one apiece, the fight was up for the taking, and Mark Hunt is never one to disappoint.

As Struve dialed up his attack, the bleach-blonde Samoan shrugged off a head kick and a hard right, sucked down a deep breath, then cocked his right hand back and unloaded a tide-turning salvo which sent Struve staggering backward. Hunt trudged forward while Struve tried to fire back, but the Dane dropped his hands in the process -- and that, as they say, was that. Hunt found his mark with a monstrous right hook then followed it up with a lightning-quick left, toppling the giant.

The king of the walk-off KO sauntered off, while Struve laid there flat on the canvas, jaw shattered, left hand hovering over the dazed, empty look in his eyes. For a second, referee Herb Dean almost didn't know what to do. But the fight gods were merciful that night, and Dean came to his senses before Mark Hunt could lumber over and make a bad night worse. 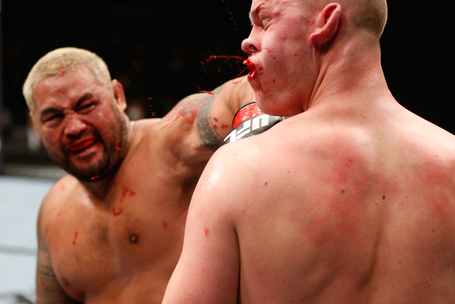 If there's any annual list a fighter doesn't want to grace with his or hers presence, it's the receiving end of this one. But alas, that's precisely where Alistair Overeem finds himself, not just once, but twice after a rocky 2013 campaign derailed the mystique of the horse-meat man.

The margins between triumph and anguish are razor-thin in all sports, but few more so than in mixed martial arts. For whatever shortcomings Overeem may have shown in 2013, it's easy to forget, the mammoth Dutchman was this close to being 2-0 and likely a runaway favorite in the UFC heavyweight title picture. But if hubris led him to snatch defeat from the jaws of victory against Silva, his follow-up act at UFC Fight Night 26 was due, in part, to simple exhaustion.

Had Overeem been fighting any representative of the other 99.9-percent of the human population, his frantic first-round body shot barrage would've ended the night early. Attaboys doled out, paychecks cashed. But somehow, in an unbelievable display of grit and determination, Travis Browne survived, weathering knee after knee to the guts, until Overeem slowed and his defenses drifted open. Gradually Browne regained his wits, and then he saw his chance.

One probing front kick down the middle. Then another and another. Each one testing the waters, each one finding its mark. Finally, the big one -- smash, right on the chin. Call it a night. Just like that Overeem's fall from grace was complete, and one of the year's most unlikely comeback stories was in the books. 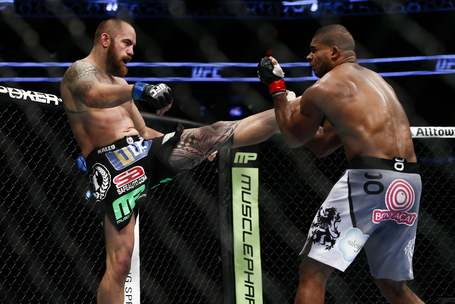