On one side of the bracket, a match-up pitting Bellator newcomer Daniel Weichel (31-8) against Scott Cleve (14-3) joins a previously reported bout between former UFC contender Diego Nunes (18-5) and Matt Bessette (12-4).

Opposite them, two-time tournament veteran Mike Richman (16-3) is slated to meet Desmond Green (9-2), while Brazilian finisher Goiti Yamauchi (16-1) will square off against Will Martinez (8-2).

The opening leg of the tournament takes place February 28, 2014 at the Mohegan Sun in Connecticut at Bellator 110. The night's main card will also feature the semifinal round of Bellator's season 10 light heavyweight tournament, which includes Quinton "Rampage" Jackson and Muhammed "King Mo" Lawal among the four-man field.

The bracket for Bellator's season 10 featherweight tourney can be seen below. 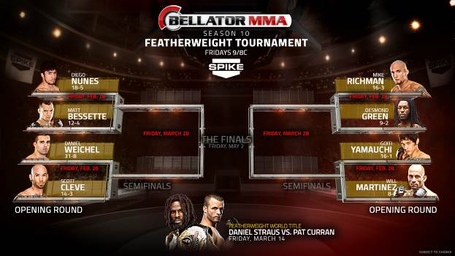 Weichel, 29, enters having won eight of his last nine contests, while Cleve, 31, recently stopped Isaac DeJesus via second-round TKO in his Bellator debut.

"I've been working hard getting ready for this tournament and I feel more than ready," Cleve said in a statement. "I almost feel like I can go into this fight with nothing to lose. I think that my speed and ground game will be my biggest asset. Weichel is very experienced and I have to be ready for a war."

Richman, 28, is 5-2 over the course of his Bellator tenure, having fought to the finals of season eight's featherweight tournament. Green, 24, is 1-1 under the Bellator banner, most recently stopping Angelo Sanchez via second-round TKO.

"If feels great to be back in the tournament," said Richman. "No questions asked, I'm coming hard this tournament. Des Green is a tough grinder and he thinks he will take me down and keep me there, I guess we will have to wait and see. He won't see my speed, but he will feel my power."

Both Yamauchi, 21, and Martinez, 33, are effective finishers undefeated thus far in six combined Bellator contests. Out of 24 professional wins between the two prospects, just two have reached the judges' hands.

"I am excited beyond belief to be able to participate in the featherweight tournament," said Martinez. "I feel like I have all of the pieces in place to make a successful run at the title. Goiti is a great fighter and the toughest opponent I have faced yet. We both love to finish fights as quick as possible. I would love to end this fight with a first round submission, but I am ready for a three-round war."