Note: To those who care, Part 3 can be found here:

If April is compared to an All you can eat restaurant (Bellator XCV, Invicta FC 5: Penne vs. Waterson and four (4!) UFC events) then I'm the morbidly obese guy, in sweat pants, waiting impatiently for its doors to open.

Gustafsson had suffered what medical experts call a boo-boo during a sparring session 2 days prior and there was still hope that the fight, where he would be guaranteed a title shot if he won, would still take place (Not to take anything away from Alex's cut, but THIS, it was not).

If Alexander could not make it, who would step up on such short notice? (because international cards are so solid from top to bottom, it's no big deal to lose your main event...)

In what would come as a ray of hope, on April 1st, Wanderlei momentarily puts down his axe and tweets:

To which Mousasi answered:

"at this moment I do not have any new info about my situation But if ufc want's and mr @wandfc is ready for me than let's Go! 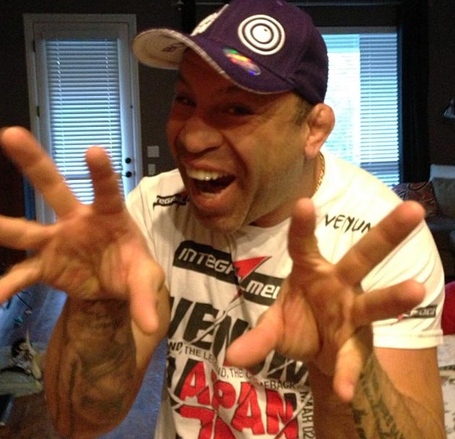 On Tuesday, April 2nd Wanderlei explained his prank in this video (If anyone can tell me how to easily transform the first 4 seconds into a screen saver, I'd be forever grateful), and I'd like to thank Tommy Toe Hold for translating it for me. (Still waiting for my Lionosaur, Tommy!).

Later that day, in what can only be described as the UFC picking a random Swede to fight in the Octagon, we learn that Ilir Latifi is the official replacement.

After an appetizer (Bellator XCV) comprised of 6 Kos and 2 submissions on Thursday, it's time for an entrée on Friday, with Invicta' first successful pay per view, Invicta FC 5: Penne vs. Waterson, where:

Pat Barry's waaaaaaaaaaaay more talented girlfriend Rose Namajunas pulls off a gorgeous flying armbar for a 12 second win and spazzes out longer than the actual fight in the cutest post-fight celebration the world has ever seen outside the UFC Hobbit Flyweight division (AKA: The Teeny-Tinys).

Not to be outdone by the Thug named Rose, the Karate Hottie defeats Penne via armbar to win theAtomweight championship.

Finally, the next day, we're off to Sweden for the main course and:

Finally, in what can only be described as "EPIC":

The lights go dim and with Eye of the Tiger as his walkout song and to the loud support and battle cries of his Viking brethren, Latifi confidently saunters to the Octagon... But despite a valiant effort and in the opposite of a Rocky story, to the surprise of no one, Mousasi easily wins a lopsided decision.

***
A mere 7 days later, we are treated to another free UFC card and this time it's The Ultimate Fighter: Team Jones vs. Team Sonnen Finale, where: 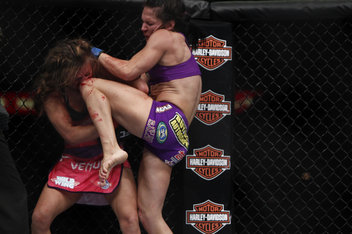 Note: Miesha would later contest the stoppage as being early (and call Kim Winslow ugly).

****
We are then treated to a third(!) free event with UFC on Fox Henderson vs Melendez where, after a night filled with exciting fights (and a Francis Carmont fight) featuring no less than 8 knockouts:

Note: Leonard went on to amass three wins in a row, all finishes (Good for you, Leonard!), in 2013

Note: I had completely forgotten how much of a dick Michael was when the fight was ruled a TKO (blame it on post-concussion syndrome and amnesia inflicted by March 2013). Here's a reminder: 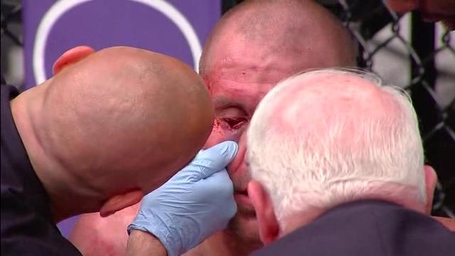 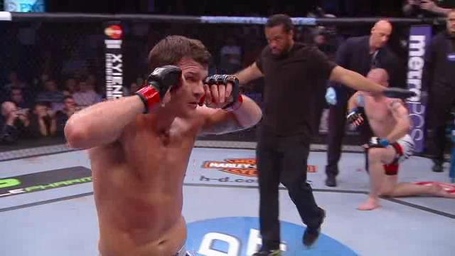 Finally, in a classic always the bridesmaid never the bride story, after being 1m:50s away from becoming UFC Middleweight champ in his first bout against Anderson Silva, Sonnen ends up 27 seconds shy from becoming the new UFC Light Heavyweight champ via this: 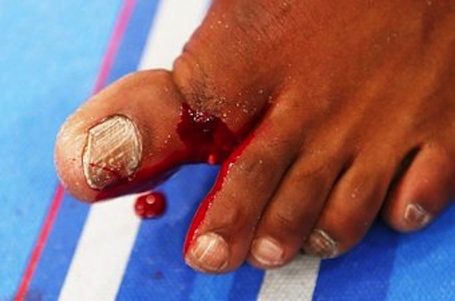 Two days after his destruction of Phil De Fries, Mitrione would appear on the MMA Hour and, in a tirade that would make the Reverend Phelps proud, share his opinion on Fallon Fox. He would end up getting fined and suspended for his efforts.

In a move that can only be called "fucking with someone" Georges St-Pierre announces that he'll fight Anderson Silva then retire and Dana White gives him his blessing. Somewhere in Texas, a depressed John[Damn it, there should be another "n" here!]y Hendricks heads out to the forest, short rope in hand, looking for a tall tree.

Referee Josh Rosenthal is sentenced to 37 months in prison, three years' probation and a $100 fee for his role in a large-scale (1,356 plants!) pot operation in Oakland, California in April 2012. The Diaz brothers go into panic mode. With too much time on his hand and no sticky-icky, Nick Diaz ponders going into the fight business with a promotion of his own, where elbows on the ground and bitches would not be allowed (more on that in: How MMA Kicked this MMA's @ss Part 5, May: Lionosaurus "Wrecks" and Clash of the Titans).

George St-Pierre, high off his fight with Nick Diaz and clearly showing the symptoms of what 5 hours in the Octagon (and 13 years in the sport) can do to someone's brain, makes a guest appearance the Joe Rogan Experience and discusses: "cutting to lightweight", "missing time ("It's crazy Joe, sometimez, aye go to sleep at night and when aye wake up... EIGHT hours has passed!")", "alien dreams" and "spirit journeys".

Junior Dos Santos versus Mark Hunt is officially booked for the end of May. A tear wells up when I read the announcement.

Phil Davis is accused of battery by his wife. Considering that his game is mostly ground and pound many are dubious of the claims about his stand-up game.

Chris Weidman hosts his first Q&A. Anderson Silva shows up just to see who the fuck he is.

[Retarded] Quote of the Month

That does it for April. Thank you for reading. Coming up next (God, I hate you Goldberg): Why 2013 Kicked this MMA Fan's @ss Part 5: May: Lionosaurus "Wrecks" and Clash of the Titans