Justin Gaethje: From the copper mines to the smiling fields of gold

ARVADA, Colo. – Upon getting a first good up-close look at Justin Gaethje, the World Series of Fighting’s fresh young intrigue, the thing that stands out is he’s incapable of half speed…or, for that matter, even three quarters speed.

By all outwards appearances he’s a horrible marauder who has trouble reining in intensity.

On his last hard training session before heading to Hollywood, Fla. to face Richard Patishnock for the inaugural lightweight title, the southpaw Gaethje needs to keep refreshing sparring partners. First he slams a powerful (yet inadvertent) knee into the brow of Jason "The Dragon" Lee, which opens up a gash and creates a web of blood down his face. That forces Gaethje to apologize, sincerely, but it won’t get him to downshift, because next -- just moments later -- he knocks the wind out of the replacement.

Trevor Wittman -- the head coach at Grudge Training Center in Arvada -- smiles that esoteric smile the whole time as he summons in a third. LT Nelson comes gamely trotting up the cage steps. Nelson is tough-nosed enough to eat the punches Gaethje delivers, though a spinning wheel-kick comes within an ant’s antennae of ruining his weekend.

And so it goes.

Wittman, the master of these behind the curtain ceremonies who’s been with Gaethje since he was fighting as an amateur, has been smiling from ear-to-ear the whole time. That smile isn’t always without sadism. He doesn’t mind that Gaethje ignores his friendly reminders to harness that intensity. Wittman loves sweet musical violence and he’s the worst in the fight game at concealing it.

The wounded sparring partners limp back down the steps and join the pack of spectators outside of the cage to egg Gaethje on until the buzzer finally rings…and then it’s just an ovation. Even Brandon Thatch, the UFC’s welterweight upstart who has his arm in a sling, has come off his moorings to shout enthusiasms at Gaethje. 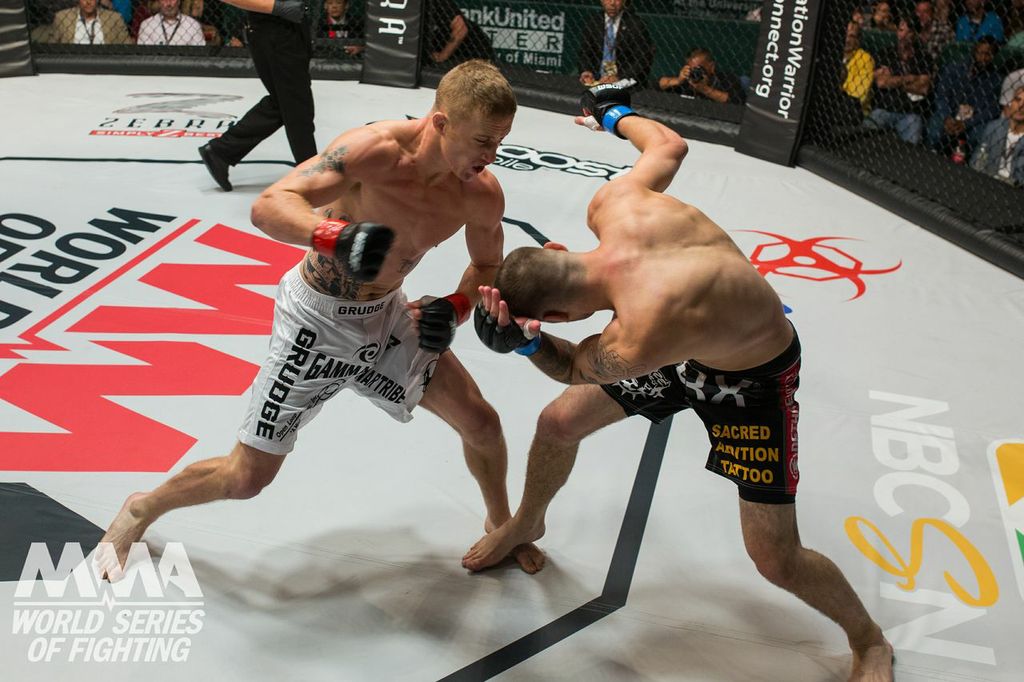 Why not? This was the big drum roll before the cymbal crash.

Gaethje, a soft-spoken, well-meaning wrestler from Greeley, has made it through his camp. He stacked up a few casualties along the way, yet everyone appreciates this crude handling of the sparring committee. The casualties themselves, all of them Grudge fixtures, are only too happy to have been a part of it. And as Gaethje circles the cage at the end, glistening with sweat and the sheen of Lee’s blood, he looks like he’s bursting at the seams to remove all headgear and shin pads and make this thing literal. He’s ready to run through Patishnock or a wall, whichever.

Maybe that’s why Wittman calls him a "bread and butter" fighter…which, like Shane Carwin, means is a moldable wrestler that he can help shape in the stand-up game.

"Justin’s finding his own style, and I mean, he’s still so green," Wittman says, still smiling. "It’s one of those things. I mean, his creativity? You watched him spar. His creativity level is just through the roof, and in such a short period of time. It’s crazy. And now he’s fighting for the title, and he’s not even touched his abilities yet.

"Putting guys in with him, we go through one sparring partner after another after another. And these are guys who have experience. To get him tired we have to put him through the gauntlet. For me as a coach, to see someone so passionate, who honestly doesn’t fear losing? A guy like that, I can’t wait to see him in five years."

A group of kids who have assembled to see Gaethje in the flesh before he boards his flight to Florida, a group he poses for pictures with and adores, don’t have an attention span that extends to five years. One of them says, "I can’t wait to see you fight next weekend."

This is said with a bit of awe-driven dread, too. Dread for Patishnock or whoever this display has all been about. These kids only know that Gaethje is the nicest most cordial person on the planet who’s capable of such cruel, unfriendly manhandlings.

The new Grudge Training Facility is a palatial 12,100 square-foot emporium that sits next to a flagstone and mulch factory and a lot of RVs. The old joint, in Wheat Ridge, was highlighted by the regulation-sized Octagon in the middle. The walls were closing in on it. At this one, the Octagon is just something that’s tucked up in the corner. It’s just a sub-region among the heavy bags, the weights, the boxing ring and the miles of mats.

Wittman, whose office has become a bric-a-brac collection of fight game lore, has supersized.

"Trevor’s great," Gaethje says after his session. "One thing he said when I first got here was that he loved working with wrestlers. I didn’t know why. Now I know it’s because we…I listed to Trevor. I know Trevor knows what he’s talking about, and that he’s knowledgeable in everything he tells me. I’m a coachable person. I don’t like to lead myself. I’ve been taught by great people, and I was able to listen to them. I don’t think anyone is going to get their on their own."

The 25-year old Gaethje is only fighting in his eleventh pro fight on Saturday at WSOF 8. He hasn’t lost. In fact, he has only had to sit through a reading of the judge’s scorecards one time. Nine of his fights have ended via a finish, usually knockouts, his latest against Dan Lauzon at WSOF 6. He did the same thing to Brian Cobb at WSOF 3. Gesias Cavalcante was unable to continue after two-and-a-half minutes with Gaethje at WSOF 2. His head, like Lee’s, was opened up with a cut, only in the JZ case it was one particularly swiping elbow -- after a series of such swiping elbows, delivered in formation with such unnerving poise -- that opened the crevasse above Cavalcante’s eye.

These are sample-sized offerings, but there is a feeling that Gaethje has the raw materials to become something in this game. The upstart WSOF promotion has been keen enough to see it and give him the chance to become its first ever lightweight champion. The people in Denver who have known about him since his days wrestling at the University of Northern Colorado can’t help from winking. Winking like the world is finally in on a long held secret. 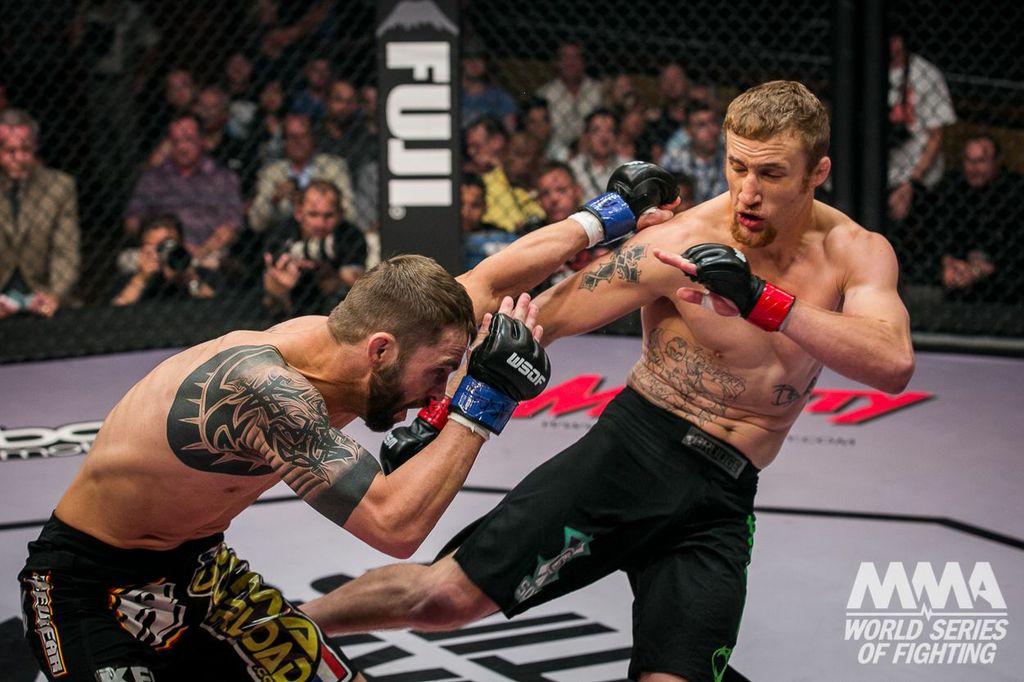 And Wittman himself, who insists that 2014’s Gaethje is just a fraction of what he’s to become, can’t get enough of that aggressiveness.

"People just can’t take that type of pressure," Wittman says. "He’s an athlete. He’s been doing that one-on-one type of athletics with the wrestling. Justin’s not afraid to lose. These guys are my bread and butter. They got great base, they can take a shot well."

The whole family deals in thermal metal. They wear hard hats, and their hands are calloused. They deal in the necessity of overtime.

"It’s grueling work," Gaethje says. "I don’t know how my dad’s done it for 30 years, I don’t know how my grandparents did it. There’s big shovels, big haul trucks, they drill down, plant the dynamite, blow it up, then have the shovel come in and haul trucks, then separate the copper. It’s the biggest open pit copper mine in the U.S. My friends who work it own their own house, their own cars. It’s a good living."

He has a the old pugilist’s pedigree, starting with him spilling out of the mines. His father has the German blood, the dander. His grandfather boxed when he was in the army, which planted seeds for one-on-one combat sports. His mother, a postmaster now in Arizona, represents the Mexican side -- the bedrock to his humility.

The Gaethje twins have been wrestling since "before we were four years old," Justin says. "I know I started wrestling at Arizona HEAT, it was a wrestling club. Me and my brother, as anybody who’s a twin will tell you…it’s a competitive relationship. Ours is really competitive."

The Gaethje household was strict, even prudish, towards unsavory things --but not towards the taboo of bare-knuckle prizefighting.

"When I was 10, when early UFCs were going on, my dad used to have that little black box -- which was illegal -- and he used to get the UFCs," Gaethje says. "I wasn’t allowed to watch anything with cussing, or any PG-13 stuff even when I was 14, but was allowed to watch that. It’s a sport.

The wrestling stuff, which is a long grinding path, is visible on his ears, where the vegetation becomes his proud biography. The grueling nature of the copper pit was a fine segue to the mats, and Gaethje took it all the way to Greeley, Colo., where he became a quiet All-American while earning a degree in Human Services. And he took it further, into the grim trade of fighting, where through 10 pro bouts he’s been his own cold industry.

For Wittman, he’s been the ore just beneath the surface, just like the family copper in Morenci, and there’s no telling how much can be extracted.

After the last session before his title chance, just as Pat Barry is plodding the heavy bags loudly to the side of the room, Gaethje is posing for pictures with children and making faces as those pictures are snapped by the parents. He is not afraid to look ridiculous in public, not where children are concerned.

The blood and sweat has been squeegeed off his chest and arms. The juxtaposition from human menace to public hero never gets old. Like so many who excel at the fight game, his is a paradox --he fights so that he one day won’t have to.

"Georges St-Pierre’s doing it the best," he says. "He made his money, made his name, and now he’s able to make money not fighting. That’s what I want to do. I want to be a fighter, this is what I love to do, but it’s totally taxing on the body and the mind. Especially the mind. I can only imagine some of the stuff that GSP was going through, some of the pressure and all that. I think I’m here for one reason: The more notoriety that I can get, I want to eventually help at risk youth, and the more popular and famous I am, the more kids I can reach. Simple as that." 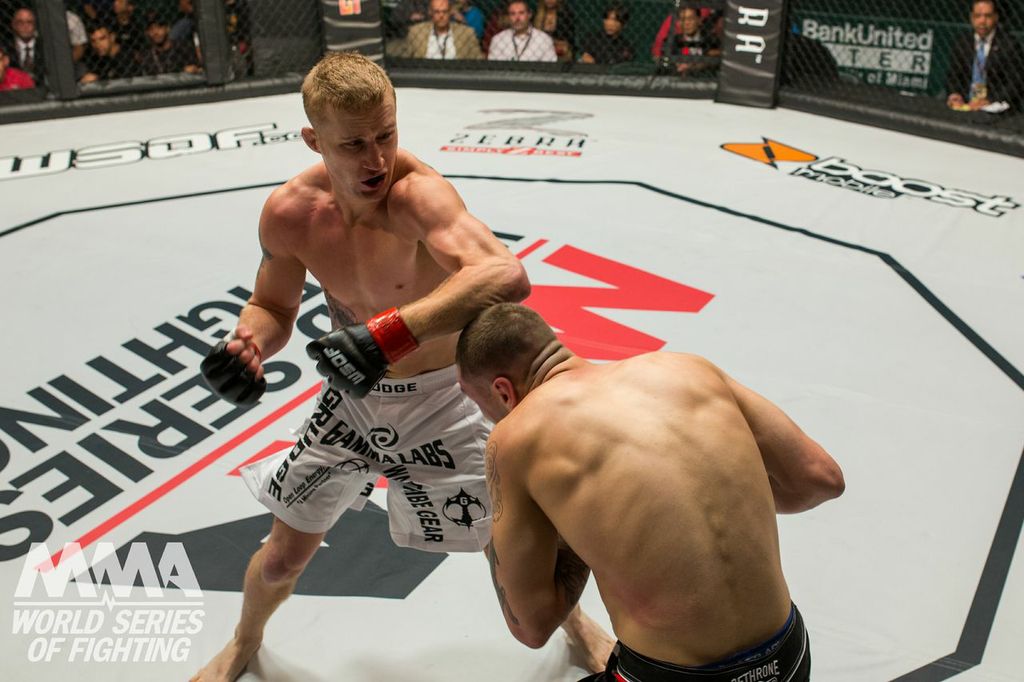 He signs some pictures, ruffles a bunch of hair, and heads off to his appointment. By Sunday, Gaethje hopes to add to Wittman’s collection of shiny belts sitting prominently on display in his office.

"The title is definitely an important step in my career," Gaethje says. "It’s something I’ve been working towards, and it’s one of my goals, getting a world title. Especially for a company trying to be the No. 1 promotion. They’re taking great steps. They trust me to be the face of the lightweight division, and that means a lot to me. That means they trust my ability and my skills and the fact that they know I’ll give 100%."