Back in March, it seemed UFC 158 was going to be the runaway leader for welterweight fight card of the year. That was, of course, the event at Montreal's Bell Centre in which Georges St-Pierre defended his title against Nick Diaz; Johny Hendricks earned his title shot with a decision win over Carlos Condit, and Jake Ellenberger scored a knockout win over Nate Marquardt.

In a battle of the unanimous 1-2 picks in this month's SB Nation welterweight poll, GSP defends his title against Hendricks. No. 4 Rory MacDonald looks to keep No. 9 Robbie Lawler from sealing his spot as comeback fighter of the year. And Josh Koscheck meets Tyron Woodley in a match in which the winner will state his case for a top 10 place.

Perhaps that's not quite enough to match UFC 158's firepower. But as things stand, that night in Las Vegas stacks up as being as consequential as any fight card will be in any division in 2013.

Speaking of consequential fights at 170, there were a couple in recent weeks. Condit proved himself still a force to be reckoned with through his fourth-round victory over Martin Kampmann on Aug. 28 in one of 2013's best fights. And Matt Brown flattened veteran Mike Pyle in Boston for his sixth straight victory, which was enough to finally boost him into the top 10.

One name you'll notice isn't on the new list is Nick Diaz. This is, of course, because the former Strikeforce champ says he's retired. While this author has a gut feeling we'll be ranking him again sooner or later, for now, we'll take the pride of Stockton at face value when he says he's done fighting. 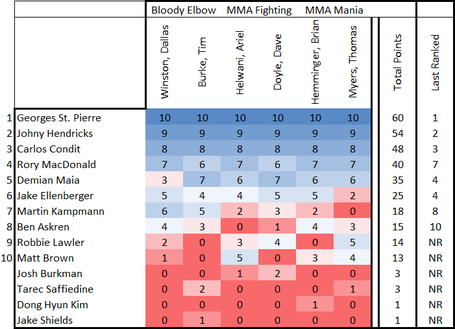 (Scoring: Fighters are given 10 points for a first-place vote, nine points for a second, etc., down to one point for 10th place. The results are then tallied up and presented here. Official SB Nation rankings policy: Fighters under commission suspension are ineligible to be ranked during the duration of their suspension or if they have licensing issues. As of this writing, this does not affect any welterweights of note).

1. Georges St-Pierre (24-2, 60 points): Random tidbit: GSP would have to hold his title until Jan. 14, 2015 in order to surpass Anderson Silva for longest title reign in UFC history.

2. Johny Hendricks (15-1, 54 points): Seemed to fade in the third round of his win over Condit. Will GSP's game plan be to wear Hendricks down?

3. Carlos Condit (29-7, 48 points): His fourth-round victory over Kampmann was exactly the sort of statement he needed to make after back-to-back losses to GSP and Hendricks.

4. Rory MacDonald (15-1, 40 points): A battle with the hard-hitting Lawler could be just what MacDonald needs to put his stinker against Jake Ellenberger behind him.

6. Jake Ellenberger (29-7, 25 points): No next fight on deck yet for Ellenberger after laying an egg against MacDonald in Seattle.

7. Martin Kampmann (20-7 18 points): Came up short against Hendricks and Kampmann. Maybe a rematch of the wild 2012 Kampmann-Ellenberger fight is on tap to give one of these guys a chance at a rebirth.

8. Ben Askren (12-0, 15 points): Bellator champ is sitting out his contract period and earning his spot among the pound-for-pound best Twitter trolls in the meantime.

10. Matt Brown (18-11, 13 points): Brown hasn't beaten anyone remotely close to a top-10 ranking during his six-fight win streak. But he's earned the right to face a ranked opponent and prove he belongs.