Just four weeks ago, we lamented the mediocre muddle the light heavyweight division had become, a wasteland of stale fighters who had tied each other into knots underneath the towering presence of kingpin Jon Jones.

What a difference a month makes.

All of a sudden, Alexander Gustafsson is a star.

All of a sudden, Gustafsson's training partner who helped him effectively outwrestle Jones for most of their UFC 165 fight, Phil Davis, needs to be seen in a new light.

All of a sudden, Glover Teixeira has the chance to be MMA's big 2014 spoiler.

All of a sudden, the guys who looked stale have intriguing fights: Rashad Evans is meeting Chael Sonnen; Dan Henderson is going up against Vitor Belfort; and Lyoto Machida is off to middleweight to meet Mark Munoz.

It's as if the division had an on/off switch which was suddenly flicked on.

With that, on to the latest poll. Jones, obviously, is a unanimous No. 1 after his record-setting victory. Gustafsson -- the same guy who, a month ago, many derided as an example of "you shouldn't rank someone No. 2 just because he's getting a title shot" -- is the unanimous No. 2 after his close loss to Jones. Teixeira, in the wake of his finish of Ryan Bader, jumps from No. 6 to No. 3, leapfrogging Rashad Evans and Davis in the process.

One fighter you don't see in this month's rankings is Machida. Sorry, Dana. We know you want the media to bend their rankings to fit UFC's matchmaking whims on any given month, but we're following the divisional scheme of things, here. If you officially announce a fight in another division, you're no longer ranked in your old weight class. 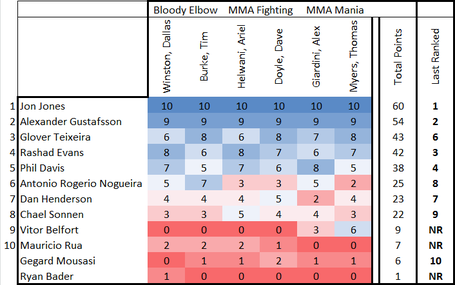 1. Jon Jones (19-1, 60 points) -- Shelve the talk of superfights or heavyweight bouts for now. With Teixeira up next and presumably a Gustafsson rematch down the road, Jones will be spending 2014 defending his 205 belt.

2. Alexander Gustafsson (15-2, 54 points) -- Sometimes you win by losing. Gustafsson was made a star at UFC 165, and shouldn't be more than a fight away from a rematch.

3. Glover Teixeira (21-2, 43 points) -- It still feels Teixeira is a signature win or two away from truly being ready for a title shot, but, you know what? Many said this about Chris Weidman, too.

5. Phil Davis (13-1, 1 NC, 38 points) -- No new fight on the docket yet for Davis. And not many that make sense, either, as the only top-five fighter available at the moment is Gustafsson, his Alliance training partner.