When Jon Jones assumed the top spot in most pound-for-pound rankings after Anderson Silva's stunning knockout loss to Chris Weidman at UFC 162, the UFC light heavyweight champion, while appreciating the gesture, essentially said he would have rather earned the spot than gotten it because someone else lost.

After a magnificent battle in Toronto, though, there's little doubt Jones has aggressively claimed the top for himself.

The one thing missing from Jones' body of work of the years was that one fight in which he was pushed to the the brink, only to find that something extra and hang on to his title in the end. And just like Silva cemented his spot atop most pound-for-pound polls after he pulled a rabbit out of the hat in his first fight with Chael Sonnen, so did Jones solidify his standing.

While a small minority is still howling that Alexander Gustafsson was robbed at UFC 165, the fact remains that Jones now holds the light heavyweight title defense record; has a 10-fight win streak, and his only loss was about as valid as Fedor Emelianenko's cuts stoppage loss to Tsuyoshi Kohsaka so many years ago. That's pound-for-pound best-worthy.

Each of the top five stays the same since the last poll. But Benson Henderson's lightweight title loss to Anthony Pettis shook up the remainder of the list. UFC interim champion Renan Barao shot up from eight to five after his dynamic head-kick finish of Eddie Wineland. Weidman and Demetrious Johnson both jumped a spot to seven and eight; and Pettis enters at No. 9. UFC bantamweight champ Dominick Cruz holds at No. 10.

(Scoring: Fighters are given 10 points for a first-place vote, nine points for a second, etc., down to one point for 10th place. The results are then tallied up and presented here. Official SB Nation rankings policy: Fighters under commission suspension are ineligible to be ranked during the duration of their suspension or if they have licensing issues. At present, this does not affect anyone who would generally be considered a Top 10 P4P fighter). 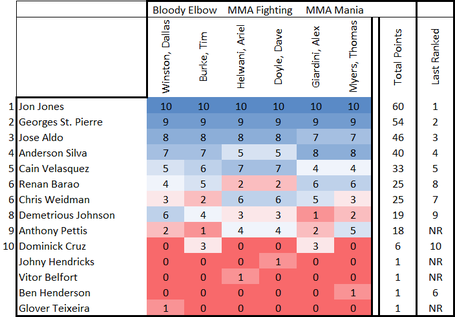 1. Jon Jones (19-1, 60 points): After his UFC 165 war with Gustafsson, only pure haters aren't giving Jones his due. Glover Teixeira is up next for the champ.

2. Georges St-Pierre (24-2, 54 points): Does GSP face the toughest task in his title reign when he meets Johny Hendricks, who can both wrestle and bang? We'll find out on Nov. 16.

3. Jose Aldo Jr. (23-1, 46 points): While Aldo heals a broken foot, Dana White has already indicated a superfight with Pettis could be in the making should Pettis get past Josh Thomson on Dec. 14.

4. Anderson Silva (33-5, 40 points): Silva's promising a new and improved version of himself come Dec. 28. If he follows through, that's kind of scary.

5. Cain Velasquez (12-1, 33 points): Title of "best heavyweight of his generation," in addition to the UFC title, is up for grabs when Velasquez and Junior dos Santos square off next month in Houston.

6. Chris Weidman (10-0, 25 points): Two spots below the guy he knocked cold in July, Weidman clearly will have to go out and do it again to fully earn his respect.

7. Renan Barao (31-1, 1 no-contest, 25 points): Speaking of earning respect, if Barao had any doubters, his back-to-back finishes of Michael McDonald and Eddie Wineland should bring those doubts to a screeching halt.

8. Demetrious Johnson (18-2-1, 19 points): The all-around virtuosity "Mighty Mouse" displayed against John Moraga should put to rest the notion Johnson is a point fighter.

9. Anthony Pettis (17-2, 18 points): Finish Ben Henderson's run with a masterful submission, and yes, you've earned yourself a spot in the top 10.

10. Dominick Cruz (20-1, 6 points): Four of the six voters didn't vote for Cruz, but in the absence of other standouts, Cruz gets the nod.