There was much to love about UFC 165 on Saturday night. The main event between Jon Jones and Alexander Gustafsson is arguably one of the best light heavyweight title fights in MMA history. It was easily the best 205-pound bout since Dan Henderson vs. Mauricio Rua in 2011.

But there was also much to dislike. The preliminary card was fairly ho-hum, there were some odd judges' scorecards and sundry other issues.

It's time to separate the good from the bad, the winners from the losers and the signal from the noise.

The Fight Was Sold Incorrectly Award: UFC for UFC 165

I know, I know. I have to eat a fair amount of crow for my own pre-fight crowing about the way UFC 165 was sold to the general public. I will do that, but I'm not entirely wrong in having skepticism about that as a sales angle. In fact, I still maintain I'm right on a key component.

First, however, let me acknowledge where I let my cynicism run amok. In dismissing the pre-fight promotion, I went so far as to mock not merely the angle of the marketing, but the reality it was trying to convey. The truth is whether reach was particularly relevant in this fight and whether it's a good idea to market that fact are two separate questions. My mistake was in conflating them. I dismissed Gustafsson's chances and the reality of the challenge he brought by focusing too strictly on the unimaginative salesmanship the UFC trotted out for this bout. I was wrong for that and have no choice but to acknowledge as much.

Truthfully, however, using reach (or the lack of reach disparity in this particular case) was not the optimal way to sell this fight. That is likely to be reflected in the pay-per-view buy rate, although even that will be somewhat buoyed by post-fight buzz. While UFC can rightly claim the reach ultimately did play a major factor in the main event itself, that is an entirely separate point from whether that particular angle is the most effective at marketing Jones, Gustafsson and their bout.

Consider two other bouts, one that's already happened and one that's on the UFC docket.

Floyd Mayweather vs. Canelo Alvarez was an interesting contest for a number of reasons, not least of which is that Mayweather was, for the first time, fighting a true junior middleweight who is in his relative youth. Miguel Cotto and Juan Manuel Marquez fought up in weight, but Alvarez was the first bonafide junior middleweight. There was a size disparity, particularly on fight night. In reality, this was part of Showtime's fight promotion, but was not the centerpiece of their efforts. Size and reach are legitimately part of the larger discussion, but can you imagine how bizarre it would've been to centrally market such a contest on those terms? It sounds boring even trying to discuss the bout in such a way. That was a bout over the present and future of boxing or, at least, it was sold to the public that way. Based on the returns, I'd say it worked.

Or consider the third meeting between Junior dos Santos and Cain Velasquez. Relative size similarity or disparity isn't as much a part of what makes this upcoming fight tick. The pair also have so much shared history at this point that ignoring it would be promotional malpractice (take a shot if you're playing along). But the UFC is doing the right thing here, namely, making this a contest not simply for the heavyweight title, but their legacies.

Why couldn't they do that for Jones? As the champion himself noted in the Countdown show and as the UFC did indeed feature, this was a fight that would technically set Jones up to be the most dominant light heavyweight champion of all time (as a function of consecutive title defenses). This was a quest for unsurpassed greatness, a moment to catch a rising star, a time to bear witness to fight sports history. This was not a time to market a fight on Gustafsson's arms being long. It doesn't matter that it's true as a statement of fact. What matters is what's going to get people to watch; what matters is what's going to get people to accept Jones as a star worth paying to see.

To be clear, I am nowhere suggesting a discussion about the reach and height in Jones vs. Gustafsson should've been absent either in fan discourse or even UFC marketing. In some ways it was entirely unavoidable. My contention is the priority of salesmanship angles was misplaced. Portraying Jones as on the path to be the greatest ever with a nod towards the particular physical challenge he faced in the lanky Swede seems far superior as a method to attract pay-per-view buys than underscoring there's a lanky Swede in front of the champion and by the way, Jones could do something special if he beats him...which oddsmakers told everyone he would do.

Best Photo of the Night: An Exhausted Gustafsson In His Trainer's Arms 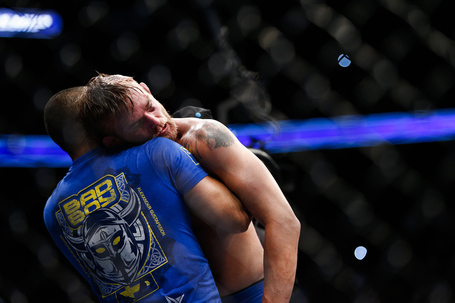 We all probably read this image differently, but I take it from a coach telling his fighter he's immeasurably proud and that everything will be ok. It's also a fighter telling his coach he unleashed as much of his fury as he was capable of summoning. The coach immediately knows his role has shifted from cracking the whip to caring for the bravely injured and impossibly fatigued. It's a moment that says it's over now. It's both men telling each other thank you.

We operate in an existence where short of a thudding, feet-twitching knockout, there is always someone willing to play the fool by arguing a fighter who lost actually won. Look again! Turn off the commentary! Don't listen to the rational observers haters! With rare exception, there is almost no fight in boxing or MMA that goes to a decision which doesn't immediately usher in some tiny subset of contrarians who challenge the prevailing wisdom despite the paucity of evidence to support such absurd claims. Believe it or not, I read defenses of C.J. Ross' scorecard in both the Manny Pacquiao vs. Timothy Bradley and Floyd Mayweather, Jr. vs. Canelo Alvarez bouts. There's always some jester willing to juggle for your amusement, I suppose.

That's why some of the post-fight reaction claiming 'the fix was in' or 'robbery!' or whatever particularly poor and shrill argument can be selected is so pathetically predictable. The reality of Jones vs. Gustafsson is this: it's a hard fight to score. Plenty of capable if unofficial judges see it for Jones. Other smart, capable if unofficial judges scored it for Gustafsson. Actual judges an computer modeling gave Jones the nod, but there's a question about to what extent the model can properly tease out the value of significant strikes. If you scored the fight for Jones, you can do so with a good argument. If you scored the fight for Gustafsson, you also have a good argument. Great minds don't always think alike.

What great minds don't do is view the outcome as some sort of obvious injustice. They don't stamp their feet or raise their voice or gnash their teeth. They recognize Jones kept the belt, but both men did themselves a service. Gustafsson proved to be the truly elite fighter many had hoped he'd become. Jones demonstrated incontestable championship grit. And because the fight was so close the first time, they'll do it again. If you're still slamming your fingers on your keyboard in disgust on Tuesday, it's time to take a long look in the mirror and ask yourself how dispassionately you are as an observer. Your calm, level-headed brethren aren't worried about what happened on Saturday. They're waiting for what happens next.

There was a moment in time where I wasn't just eagerly anticipating the return of Dominick Cruz simply to have the champion back in action, but to give Renan Barao a run for his money. There may have even been a time where I still favored the champion despite the layoff and injuries. Not anymore. We can't simply dismiss someone as dedicated to his craft as Cruz, but we also can't ignore what's in front of our eyes anymore. Barao was always talented, but is positively a destroyer at this point. He dispatches tough contenders in spectacular fashion even when he loses moments of or an entire round. He's able to lean on his incredible skill set to make adjustments between rounds that make it all seem so inevitable.

For now, Cruz is still the rightful champion, but it's hard to draw out a clear path to victory for him anymore. Barao is the guy at bantamweight now. It's up to Cruz to prove otherwise.

Is there any top UFC fighter who more effortlessly intertwines being a feral animal and technical savant as successfully and enjoyably as Nurmagomedov? One moment he's leaping into shovel punches with no jab or set-up, the next he's hitting impeccably-timed knee cut across passes and single leg sweeps. I don't know how far he can go with that sort of open style, but it's certainly worked out for both him and the audience lucky enough to watch him. He's all offense, just enough defense and hungry for more. I say give him someone closer to top 5 to see what he's really made of. That is, aside from broken glass, rusty nails, tiger claws, sweat and bottled dominance.

You have to give it to him. After a disastrous performance in a contest where he was hopelessly outmatched at Metamoris opposite 'Cyborg' Abreu, Schaub did himself a solid with a dominant win over Matt Mitrione. Schaub used every dimension of the game with aplomb and even finished his friend/rival with a nifty choke that underscores his technical growth. In a thin division, the victory earned him a fight against a legitimate opponent in his next outing.

Now all we have to do is find a way to convince him he not only lost that match with Cyborg, but that he'd likely be flagged for stalling at any NAGA or Grappler's Quest tournament.