Hyperbole and sports writing seem like eternal soul mates at times, but you'll be hard-pressed to find someone snubbing UFC 165's main event as anything but one of the greatest MMA fights in recent memory. After a razor thin decision went the way of light heavyweight champion Jon Jones over Alexander Gustafsson, everyone's immediate question was when we'd all be treated to part two.

Unable to mount the post-fight presser's dais to field questions from the media, Jones and Gustafsson were sent to the hospital to begin the healing process. Luckily, Ariel Helwani was able to catch a quick interview with the challenger before he'd join Jones.

When asked if he believed he did enough to win the fight, Gustafsson sounds to be a believer that to be the champ, you need to beat the champ. "It's hard to say,' said Gustafsson. "I don't know. I learned a lot from this fight. He's the champ for a reason. To take the belt from the champ you need to finish him. That's how it is and I didn't do it. I didn't get the belt so I'm disappointed."

On talk of a likely rematch with Jones, Gustafsson says he's ready and willing for another shot at the champion. "Absolutely. I'm down whenever. I want a rematch right away, if I can. It's up to the UFC. I'm just blessed to be fighting in the UFC. I believe it's an honor to fight Jones and I'll be ready whenever they call me."

Jones was photographed being helped from the Octagon and back to the dressing room Saturday night, before reports surfaced he was carried to an ambulance on a stretcher, breathing heavily. Jones cornerman and trainer, Mike Winkeljohn, tweeted Sunday that Jones had 'possibly shattered' his foot early in the fight. With Jones sounding the worse for wear, the UFC might be working more on his timeframe as they look ahead for potential dates.

UFC 165 Aftermath. In addition to making the case for Jones to be regarded as one of the sport's all-time greats, Dave Doyle breaks down the calls of the night and who's seeing their stock plummet.

Fortunes changed for five. With two championship bouts in the books, Dave Meltzer explains how Saturday's results reverberate throughout the UFC's light heavyweight and bantamweight divisions.

Wineland. Stopped early in the second round of his bantamweight title bout with Renan Barao, Eddie Wineland later called the TKO, 'bulls**t.' "[Barao] caught me with a great kick. I was by no means out, I was on my way back up."

Wrap up show. Following the UFC 165 post-fight presser, Ariel Helwani and Chuck Mindenhall give their instant reactions to the night's action in Toronto.

The Eagle. Even with No. 1 lightweight contender Josh Thomson in his corner, Khabib Nurmagomedov says he 'wants a piece.' "We're a big family at American Kickboxing Academy and we train together. If he wins, I'm gonna ask him for a piece of that title."

Rogan and Goldie recaps for UFC 165.

Jorge Luis Bezerra vs. Scott Askham for the middleweight title at BAMMA 13.

Walk off KO, Beau Tribolet vs. Liam McGeary at Bellator 100.

As per usual, please make sure to check out Shaun's 'Pros react' post to get instant reactions from UFC 165.

That fight was just what I needed

Didnt go my way last nite but ill be back stronger thats a promise!!! Wanna thanks all my fans u r... http://t.co/xsurscP7k7

#MMA: there is a huge difference between good and great. Jones is good, Cain is great.

Also, I guess I have to get a picture w/@AlexTheMauler now since everyone says he looks like he could be my younger brother. #IFeelOld.

I think it's time for the @UFC to start experimenting with different scoring systems. See if something is more suitable for MMA.

I drove my first Harley today, i got up to 140mph in the rain. No big deal http://t.co/t8TOIXsjYk

It's official hands broken in 3 places. Getting surgery. I'll be back stronger!

I forgot about the Rampage show.

I had a great time playing with my toys on my day off,loving the trails n Mexico. (Not sure the film... http://t.co/VZ9UiIlriG

I have a great new TELEVISION SERIES coming out soon about my Bailbonds & Bodyguard business here in Reno Nevada...) @arielhelwani 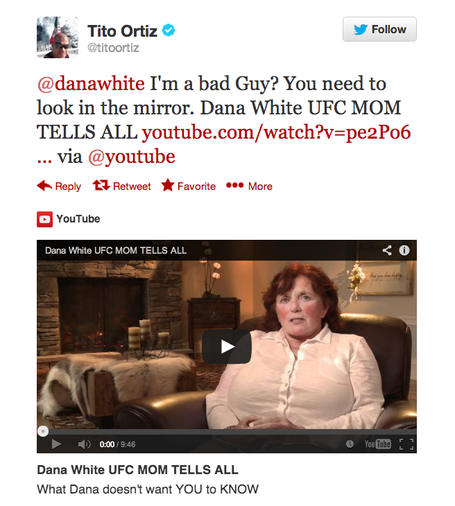 Our condolences go out to Zak and his family.

Just over 24 hours ago, my father lost his battle w/ lung cancer and passed away. It was quiet, peaceful and his... http://t.co/klenBbiEHm

Cheick Kongo vs. Mark Godbeer moved from Bellator 101 to Bellator 102

Toronto, Ontario, Canada was the stage for the fight that is surely the front runner for fight of the year. Jon Jones squared off against Alexander Gustafsson in a fight that was promised to make our heads explode. That wasn't the only fight on the card though, so let's get into this.

The first fight on the card was a lightweight showdown between Pat Healy and Khabib Nurmagomedov, a fight that most likely had title implications. After a strong first round by Nurmy, he seemed to slowed down in what was a back and forth 2nd round only to come back strong in the 3rd, sealing a unanimous decision. Pat Healy is a great fighter, dare I say a lightweight elite, I would like to see a fight between him and Joe Lauzon. Nurmy looked great and deserves a fight that would lead to a title fight. I say the Ben Askren wannabe fights Rafael dos Anjos with the winner getting a title shot.

The next fight between Costa Philippou and Francis Carmont left much to be desired as Carmont put forth a GSP-like performance and took Philippou down and kept him down to earn a very lop-sided decision. Costa really did Philipoop on himself, he had absolutely nothing for Carmont; he has a lot of building back up to do. I say he fights Chris Camozzi or the nightmare match up that is Yushin Okami. I'm not sure where to put Carmont. He beat Philippou, who I was never really sold on, lost but was given the decision against Tom Lawlor, and won controversial decision against Larkin. Let's see him fight Cezar Ferreira or Thales Leites, then I might have clearer opinion on him.

The Heavyweights were up with Brendan Schaub fighting everyone's favorite meathead Matt Mitrione. Schaub used crisp powerful combinations to batter Meathead on his feet before taking the fight to ground and submitting him with the D'arce choke, a first for the UFC heavyweight division. Mitrione moves to 1-3 in his past 4 fights, not a good position to be in, fights against Brandon Vera(if he's still with the UFC) or Nikita Krylov are fights that would get him back on track. Like him or not Schaub's got talent and he's getting better, a fight with Todd Duffee or Stipe Miocic would be nice scraps.

The co-main was the interim bantamweight title fight between Renan Barao and Eddie Wineland. Round 1 was very competitive, Wineland used his boxing to give as much as he took. Round two came around and was more of the same, until Barao threw his "spinning stuff", and finished Wineland with a spinning back kick to the head. Wineland, who looked very impressive, should look to rebound against Iuri Alcantara, in what should be an interesting fight. As for Barao, the next fight absolutely should be against Dominick Cruz, we need to get rid of the "interim title" nonsense as soon as possible.

The final fight of the night was Jon Jones against Gustafusson for the title. The best way I can describe it is that my friend and I started off the fight sitting nonchalantly on the couch, and by the end of the fight we were standing about a foot from the TV, losing our freaking minds. Jones showed his championship heart while surviving some hellacious shots and coming back with his own, and Gustafusson showed that he is deserving of nickname "The Mauler". For all you wondering, I had Gustafusson winning the fight, but I am perfectly fine with 48-47 for Jones, but the judge who scored 49-46 needs to taken behind the barn and "put down" CJ Ross style. I'm not going to let that put a damper on what was an incredible fight, what has to be the front runner for fight of the year. Be sure to comment and tell me how wrong I am.