There was much to love and hate about Saturday's UFC 164. A star was born and a new champion crowned at lightweight, but several key UFC fixtures found themselves likely wondering what's next after a series of deeply underwhelming performances.

Harshest Reality: Anthony Pettis as Champion Is Better for UFC

Benson Henderson as champion was by no means a burden for the UFC. You could do worse than to have had a young, go-forward, aggressive fighter who is (was) undefeated in the UFC as your champion. The problem is, however, that the scenario Henderson presented with the UFC isn't necessarily as great as what Pettis potentially provides.

Should Pettis lose relatively soon, all of this goes out of the window, but let's assume he can string together a few victories in the foreseeable future. That kind of champion - a young, dynamic finisher who acts and competes as if he has a chip on his shoulder - is a) more promotable, b) makes attracting fans less of a chore and c) could arguably turn lightweight into a promotional powerhouse a la the days of B.J. Penn.

Star making is an imprecise art that often doesn't work or, just the opposite, works without needing much help. The reality is some things work better than others. A ruthless finisher who competes and talks with intensity while maintaining an urban, blue collar appeal is easier to turn into a star than an equally intense fighter who continually goes the distance while preaching non-confrontational humility and the art patronizing the book store coffee shop.

His wide open style is something to not ignore, but Lim's two Octagon appearances also have resulted in enough to produce real excitement and intrigue. Lim is a positively enormous welterweight and one not afraid to leverage the physical advantages the differential over his peers confers. Simply stated, he's hard to physically deal with in a variety of the game's facets. And if we're looking down the road in terms of the UFC's international expansion, he could potentially set himself up for greater face time, support and the like if and when the UFC truly tries to capture the South Korean market. Let's see how 28-year old progresses, but so far, so good.

Let's be fair and clear, and note this up front: Mir, Vera and Guida are all still capable of winning fights in the UFC. That's particularly true for Guida among the group of three. But if we're being honest, we also must acknowledge it is likely the case that their best work is behind them.

Speaking candidly, that's ok. Fighting careers all have trajectories to them and they're never arrows that point up and to the right. They more closely resemble hills where there's both an ascension, peak and decline. Some declines are worse or steeper than others, but they all exist if a fighter stays in the game long enough. There's nothing embarrassing about them, though, because with time, they're inevitable. The only way to truly avoid them is to get out before they manifest themselves.

Mir, Vera and Guida are by no means done, but they appear to all be on the other side of whatever career peaks each of them once enjoyed. Title talk seems fanciful at this stage as does the idea they can hold rank and position in their divisions in a way they all once could. So, while we can't and shouldn't write them off, we should also acknowledge their best is not yet to come. It's already been here. What's left is still considerable, but a function of how well they manage the ride down the hill they spent years successfully climbing.

Most Surprisingly Enjoyable If Minor Note about UFC 164: UFC.TV

For the first time since I began watching MMA (and the UFC.TV service existed), I elected to watch a UFC event on UFC.TV. If you've never done this before, you're missing out. The feed of the program is in crisp HD, sure, but the most intriguing part is the features UFC.TV provides. The user can change languages for commentary (or remove it altogether), switch between a host of camera angles, use picture-in-picture toggling and a bevy of other fun, interesting and otherwise novel tools in an easy to use interface. Fighting is a deeply personal act, but not solely for the competitors. Viewers at home need to be able to find a way to bring themselves as close to a fight (on their terms) as technology allows. Nothing makes that goal more possible than UFC.TV.

It's always amusing when fights have disaster written all over them and in every way possible, live up to the expectations. Paleilei can at least point to what appeared to be badly injured ribs as his excuse for sub-UFC cardio. As for Krylov, one wonders if fighters are being signed on the strength of their nicknames alone at this point. The Ukrainian Russian was stopped in the first round as recently as March and not by a good opponent. I'm sure UFC officials had relatively low expectations for this bout to begin with, but managed expectations shouldn't border on cynicism or contempt for the audience. This fight isn't even up to UFC 2003 standards, much less today's. Let's hope it served as a cautionary lesson in exercising a little more quality control over preliminary card action.

Much to my delight, even comically inept scorecards on Saturday (30-27 Camus) and questionable stoppages (Josh Barnett over Frank Mir) didn't really obstruct with the natural order of things. Camus legitimately deserved to win that fight and the true, unequivocal end for Mir was near before referee Rob Hinds stopped things perhaps a shade too early. In other words, the right guy(s) won, so we have little to complain about. The reality, though, isn't so simple. The truth is that while nothing went wrong this time, it seems more due to serendipity than improvement. These minor miracles could just as easily proven to be relatively major malfunctions, resulting in bad stoppages and unfair decisions. Let's accept the results for what they are: good enough for now, but no indication they'll be this good enough later.

Best Photo From The Event: Chico Camus Gets Air 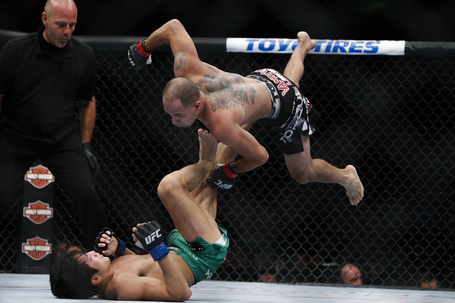 A photo that can capture a fighter's more acrobatic moments is a great MMA photo, indeed. See the rest of them from Saturday's event here.