There was much to love about UFC 163. From the beautiful jiu-jitsu on display to the enthusiastic Brazilian crowd, the event showcased some of what makes MMA great.

Yet, there was also much to detest. The event itself was supremely lackluster, the main and co-main events very so-so affairs and the entire thing was behind a rather pricey paywall.

It's time to separate the best from the worst, the winners from the losers and the signal from the noise.

Least Deserving of Being a Pay-Per-View Event: UFC 163

On the one hand, it's very difficult to argue a fighter the caliber of Jose Aldo shouldn't be behind a paywall. He's nearly as good as they come, a growing star in Brazil and one of the best pound-for-pound fighters in mixed martial arts. On the other hand, it'd be overly generous to call Saturday's card even serviceable, much less good. It definitely wasn't worth $55.

The UFC is currently dealing with serious opportunity cost as it relates to foreign expansion and maintaining strong pay-per-view. They've expanded operations in the name of global hegemony. Any effort of that scale is tough and there've been setbacks. Germany, Europe's largest economy, is a no go. France just gave Zuffa the stiff arm. The UK still has potential, but has exhibited slower than anticipated growth. That's especially true for Mexico. Who knows what will happen in Asia (although there is reason for optimism)?

In fairness, there have been successes, too. Brazil is about as good as a market is ever going to be. Canada has been a very strong player, particularly in pay-per-view.

In any case, this expansion forces certain realities. UFC has signed quite a bit of talent and they're staging as many shows as ever. And not just 'shows', but very different shows of different scale in different countries with different purposes.

The point is this: as much as they deny it publicly, there is a price to be paid for all of this. I'm not suggesting nurturing the Brazilian market is foolish, but it doesn't come without significant opportunity cost. If they wish to run this many shows and do so in territories that make serving the pay-per-view buying audience, i.e. North America, then they need to accept what is already happening: a decline in the UFC pay-per-view baseline threshold as well as volume in sales overall. This is curious way to do business for an organization that rightly identifies itself as a pay-per-view company.

UFC 163 had no business being on pay-per-view. It barely had any business on pay-per-view even before Anthony Pettis was injured. Sure, that fight is great, but what about the rest of the event? Aldo and Pettis, for all their fighting prowess, are by no means established or proven pay-per-view draws and they were surrounded by talent that's great if you're a resident of Rio de Janeiro. But that audience isn't the one buying pay-per-view and they aren't necessarily that keen on paying for the services of Cezar Ferreira.

Every time someone brings up the fact the UFC runs too many shows, their argument is publicly repudiated by UFC brass. And that's fine, I suppose. But there's no getting around the reality that shows like Saturday night's, whatever other value they have, hurt their pay-per-view baseline threshold and the UFC brand as a calling card for action generally.

Most Enjoyable Aspect of UFC 163: Demonstration of Elite, Fun Jiu-Jitsu

If you've never watched the Brazilian jiu-jitsu world championships before (or really any major tournament), by the time the black belt finals roll around, it's almost exclusively Brazilians in every single division. There are any number of reasons for this and it'd take too long to explain, but just know the monopoly they enjoy on the upper echelon of the jiu-jitsu game cannot be overstated.

The good news for UFC fans is that at least we get to take advantage of it on events where the fight card is filled with first-rate black belts. I'm not sure there's tremendous MMA upside to Sergio Moraes, but his backstep pass from the knee cut across in half guard was a thing of beauty. His subsequent float into mount from Neil Magny's frame-up to escape side control was downright angelic.

Cezar Ferreira had his moment in the submission sun, too. Using the front headlock, he walked around the outside of Thiago Santos' arm to lock up the Pat Curran-Shahbulat Shamhalaev arm-trap guillotine. And while I would never wish defeat upon Vinny Magalhaes, if the loss to Anthony Perosh brings him closer to a rumored rematch with Marcus 'Buchecha' Almeida at an upcoming Metamoris event, I am all in.

I wholeheartedly agree with my colleague Dave Doyle's assessment about Aldo's performance and all-time standing after Saturday, but I also can't help but feel the gap might be closing on him just a tad, too. I'm not here to downplay Aldo's tremendous performance and demonstration of grit in the face of injury against Chan Sung Jung. I am willing to say, however, that while still relatively minor, the rest of the featherweight division's elite don't seem as hopeless as they once did. I am further not suggesting Cub Swanson or Ricardo Lamas are going to give Aldo all sorts of nearly insurmountable problems, but I am saying for all of Aldo's technical proficiency and skill, his growth curve appears to have leveled off.

Aldo is almost incontestably better than every other featherweight. I am certain he's more athletic than the rest of them. I am not certain, however, that on a good night for them and a slow night for Aldo, the talent differential is so great it can't be shrunk and overcome. I don't see any obvious contenders on the horizon who clearly fit the profile of Jose Aldo Killer, but I'm not sure that person needs to exist to (down the road) give the champion all he can handle.

Best Photo From The Event: Is That Lyoto Machida? 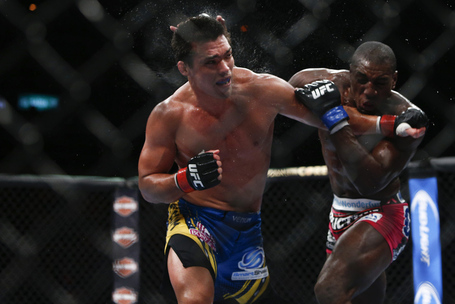 Fighters often make a huge variety of different faces before, during and after fights. They're either in extreme pain or in the throes of adrenaline-fueled euphoria. They're often surprised, angered, stern and even jovial. But almost no matter what, their faces still look like them. I like this photo because Machida almost looks like a different person. He's grimacing as he partially absorbs a shot from Phil Davis, but he's also blocking the light. The edge of it around his head combined with Davis' hand appear almost as horns or some sort of adornment. His face is also turned enough that it offers a visual sleight of hand in turning Machida into someone he is not. The sweat flying off around his head and neck almost serve as arrows to draw attention to his new face; in this case, the face of a man who barely looks like himself in the midst of battle.

To see all of Saturday's photos, go here

I'd like to say it was a pleasant surprise former UFC middleweight Brian Stann turned out to be an excellent color commentator, but it's not. I stumbled upon Stann once watching FUEL as he did boxing color commentary for a Golden Boy show. I figured if he excelled at that, MMA should be a piece of cake. Sure enough, it was.

He was crisp, informative, helpful, focused and, well, a breath of fresh air. I certainly have enjoyed Joe Rogan's commentary, but Stann's appeal comes from his status as a former high-level MMA competitor and more standard broadcaster inclinations.

I legitimately appreciate Rogan's unique, non-traditional take. He's got a style that's hard to imitate. But I've long believed the UFC's embrace of the non-traditional is both it's blessing and curse. I did not think highly of the UFC 163 fight card, but it was hugely preferable because of Stann's verbal guidance. A dose of traditionalism to standard UFC operating procedure, ironically, is often the new twist it needs to enliven the product.

Strongest Reminder It Never Gets Better: The Decision in Lyoto Machida vs. Phil Davis

There's some debate to be had about what the scores should've been in Saturday's co-main event, although finding two rounds for Davis is a search process I believe ends up nowhere. Regardless, there should be no debate that of all the rounds, the third was the most dominant of any of them with Machida clearly being the rightful winner. Yet, we have a judge who botched even the simplest of tasks, scoring Machida's best round for Davis. And on and on it goes.

Just keep in mind, there are people in this industry, often influential, who will publicly defend the position there's nothing wrong with MMA judging or that the problem is greatly exaggerated. This is akin to suggesting a rotten banana is still edible in parts. It's not horrible everywhere, but it's bad enough that we're never quite sure if we can take a bite.

This problem is not going away or getting meaningfully better. It's largely the same and as long as power brokers suggest the problem is a media creation for page views and clicks, it will never go away. Just FYI.