GLENDALE, AZ -- Benson Henderson spent Fourth of July weekend the same way as you or I. Long after the smell of firecrackers and outdoor barbecue vanished into the summer twilight, Henderson sat, eye transfixed, mouth agape, watching the silliness that unfolded before him.

Deep within the Las Vegas strip, the man dubbed the greatest of all-time shimmied. He shook, he shuffled, he threw up his hands. The histrionics were almost comical. But this is Anderson Silva, Henderson thought. This is what he does. How can you tell him otherwise? And then, with one dull thud, like a mallet on raw meat, the moment came.

Silva collapsed onto the canvas, felled by his own hubris as much as a left hook from hell, and Henderson's goal, once so abstract, suddenly became tangible.

Since the beginning, Henderson considered Silva to be a role model, an inspiration. He spoke early and often of one day becoming Silva's equal, then surpassing his hallowed record for consecutive UFC title defenses. Back then the mark seemed endless. After all, Silva wasn't going to lose anytime soon.

But he did. And now the number is set in stone. 10 title defenses.

"I'm going to break it in 2016," Henderson declares within the locker room of Glendale's MMA Lab. The statement seemingly comes out of nowhere, but Henderson's voice is steady.

"I should be able to break it by 2015, but because I'm getting married I'm going to take some time off for my honeymoon. That's going to set me back by about three to four months. But I have it down exactly. I know when I'm going to break it. It's going to be early 2016. I know what number I need to get. I know the amount of hard work it's going to take for me to get there. I know how much I've got to get beat up, I know how much I've got to practice. I'm aware of it. I know it. Now my goal is to go out there and go do it."

Henderson gazes down to the floor then rips a hunk off his tuna sandwich. In the fight game, athletes sign death warrants by getting too ahead of themselves, staring too far down the line and overlooking opponents. But Henderson has been saying this all along. The truth is, nothing has changed. Now ‘10' is simply a reality instead of an idea. And right now, ‘10' is looking like a daunting climb, considering ‘3' was grueling enough.

Henderson hears the critics. It's impossible not to. After utterly dismantling Nate Diaz for 25 minutes on national television, Henderson thought the worst was behind him. But then Gilbert Melendez happened, and a familiar refrain came flooding back.

"I am cognizant of it. I'm aware of it. But ultimately, it is what it is," Henderson says. 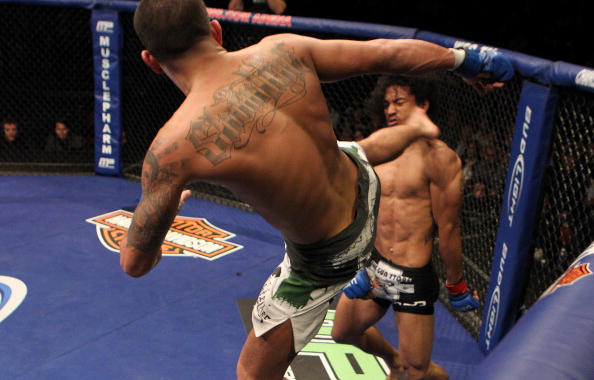 "So that's what? Gil and then Frankie (Edgar) the second time? So two close fights? Really?"

Henderson runs down the list with a coolness, though by the end he can't help but give away a hint of irritation. This camp, more than any other, has been like that. It's not as if Henderson doubted Anthony Pettis would eventually meet him at the top. He didn't. The man bleeds competitiveness. He'd never admit it, but he's been dying for round six.

More so, it's that, for the weird reason life always hands us little coincidences that seem too coincidental, the similarities on paper between WEC 53 and UFC 164 are just too eerie.

A Harley Davidson contest leading to a jubilant homecoming, where Pettis will once again try to steal what Henderson believes is rightly his; it's almost too perfect. Pettis calls it destiny. Henderson calls it providence. But it all means the same thing. Those questions Henderson has been hearing for three years -- ‘What went wrong?' 'How did you feel?' 'Do you want revenge?' -- have come full circle.

Henderson always dismissed the Showtime Kick. He was over it, he'd say. But now? Now he can prove it.

"It's not that I don't care," Henderson explains. "But the way I see it, some guys talk about how great they were in high school or in college. 'Oh yeah, in high school I was the man. I did this and oh man, blah, blah, blah.' Yeah, dude. You're right, that was cool. Awesome. Good for you then. But guess what? We're past that now. I'm over that. You've got to man up at a certain point and stop living in the past."

The narrative fits so well, it's strange to think about how this inevitable collision almost never happened. No. 4 on Henderson's quest to 10 could've been T.J. Grant. But a pesky concussion lead to his removal from the equation, and along the way Pettis never stopped talking.

Henderson admits, almost begrudgingly, that he knows "it's better business" to fight Pettis. It's his first chance to cash in those shiny new pay-per-view points, after all.

But for Henderson, there's more to it than that.

"I'm not going to talk my way into a title fight," he says. "Send a text message and say, ‘Oh, I want this guy now.' Just not how I do things. Some people are good at it. Some people make their career on doing that. It's not how my mama raised me.

In many ways, it's not surprising that Henderson and Pettis are to be forever linked. They're perfect rivals. Not in the classic good vs. evil sense, because both men are nothing if not pleasant. But the way everything played out since WEC 53, the two paths couldn't be further apart.

Henderson picked up the pieces, revamped himself into a technical, hyper-athletic monster, and gutted through hours of cage time on his road to gold. Pettis, on the hand, looked out of sorts after winning the WEC title, stumbled against Clay Guida, then succumbed to a parade of injuries. But somewhere in between then and now, he rediscovered himself, and over four combined minutes of cage time, Pettis flashed the brilliance many once expected from him.

"Everyone knows his weakness is wrestling," Henderson says flatly.

"For a lot of his fights, even going back to his WEC career, even in the earliest part of his career, if you stand up and stand there with him, obviously he's going to kick you in some spectacular way. But his loss (to Clay Guida), his split decision against Jeremy Stephens, those are against guys, not exactly Jeremy Stephens but Clay Guida especially, against guys who are going to take him down. That'd be a hole; a weakness in his game. Two guys who fought him afterward, (Joe) Lauzon and (Donald) Cerrone, both stayed there, so it allowed him to do what he does best.

"(Georges) St-Pierre says it. If I'm going against somebody, and I know his weakness is this place, yeah, I'm going to exploit it. I'm going to find out every weakness and then go pick on that area."

Henderson finishes his thought, pops in the last bite of his sandwich, then points down at the crumpled Ziploc bag. He won't say he models himself after St-Pierre, or any other champion in that regard, but he does pay attention to how champions do things. He pays attention to how Jon Jones eats. He pays attention to how Cain Velasquez runs his camp. His YouTube page is littered with videos of B.J. Penn doing this, B.J. Penn doing that. "B.J. holds his cup like this. Well guess what? I hold my cup like this now," he jokes.

It's here that both Henderson and Pettis share a common drive -- an athlete's natural urge to become the best. But in that respect, even despite what happened three years ago, Henderson seems to always be one step ahead. Pettis is always chasing what Henderson always has, and Henderson dedicates his life to making sure it stays that way. For whatever dramatics people pour into his head -- destiny, providence, the biggest fight of his career -- Henderson knows this is only the next one. Just No. 4, and afterward comes No. 5.

"You can say I'll close a chapter. You can word it however you want to," Henderson says. "For me, it's just another fight. Go beat his ass. Done."