Morning Report: Michael Bisping says he 'could have easily done' what Chris Weidman did at UFC 162

Now the opportunity is gone, stolen by Chris Weidman's thunderous UFC 162 performance, and Bisping can't help but speculate about what could've been.

"Obviously, it would always be a dream of mine to fight Anderson Silva and be the guy to take the title, of course," Bisping told MMA Weekly. "And yeah, I was a little disappointed because Chris -- I'm not taking anything away from his win -- but we all know that Anderson Silva was acting like an idiot and he got knocked out. It would have been nice to be that guy that did it. So congratulations to Chris. He's the new champion and he's certainly a formidable force at middleweight. But yeah, it stinks a little. You know, I could have easily done that. I could have easily done that."

Bisping and Silva debuted in the UFC within four days of each other, each man instantly making his mark with a knockout win in mid-June 2006. Since then the two have found success side-by-side, overcoming adversity to remain atop the division well into their thirties.

But Silva was always the one fish Bisping could never catch. And even though the Brazilian is no longer champion, Bisping still considers himself a fan.

"It'd be a shame not to fight him. He's a legendary fighter. He'll probably go down like a Muhammad Ali type figure in the sport," Bisping said. "When I'm sitting on a barstool 20 years from now and I can say, ‘Yeah, I was fighting in the UFC.' ‘Did you fight Anderson Silva?' Of course I want to fight Anderson Silva, so hopefully that match-up still happens.

"But that aside, I'm focused on the belt. I think Chris Weidman is a good match-up for me. I think I'm better on the feet and I think I can stop his takedowns, and if he does take me down, I can get back to my feet."

Struve update. Stefan Struve discussed his current mental and physical state after being diagnosed with an aortic valve leak and an enlarged heart, which will at some point require surgery. "The first day they said, 'We'll have to check this out, but your career is pretty much over.' But I don't believe this thing that I've had my entire life will end my career," Struve said. "There are still a couple of question marks."

Bisping talks Weidman-Silva. Michael Bisping congratulated middleweight champion Chris Weidman for his UFC 162 knockout win over Anderson Silva, however he couldn't help but throw in this caveat (via MMA Weekly): "We all know Anderson Silva was acting like an idiot and he got knocked out. ... I could have easily done that."

Belfort dismisses rumors. Vitor Belfort denied that his TRT use is the primary reason the UFC continues to book him to fight in Brazil. "I believe the reason why I fight in Brazil is because I sell a lot in Brazil," Belfort said. "I miss fighting in Las Vegas and other places, but I don't see any problems that I'm not fighting (there) because I sell big in Brazil."

I'll say this: That prankster is lucky Sexyama took it so dang easy on him.

Props to @BangPatrol for the find.

So, this is Cain Velasquez grappling with Brett Rogers. And it pretty much goes how you expect it to.

It weirds me out that this fight was six years ago. Seems like it was yesterday.

Rampage Jackson and Tito Ortiz hit the ESPN carwash yesterday to promote Bellator's upcoming pay-per-view, but really they just wound up talking about the UFC. 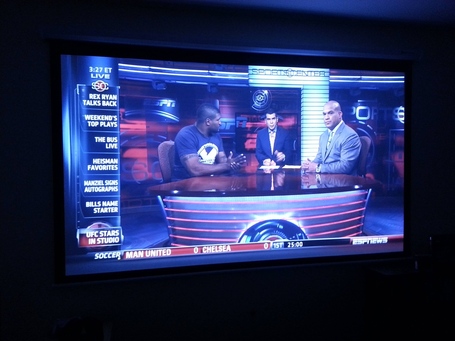 Im going to joins Golds start lifting and eating clean. I can get around without crutches so its time to build my body back

Thanks guys. All I wana do is get back in there and win some fights. Thats it

I'm a big fan of the one 10 min round followed by a 5 min round and scoring the fight as a whole. What do you think @kennyflorian @Jon_Anik

BROTHERHOOD OF THE TRAVELING FANNY PACK

@Bartimus7 @TimKennedyMMA Rogan and I were wearing them long after they were cool. Hell, I think he still uses them.

@joerogan @patmiletich @TimKennedyMMA the wife is gonna hate it, but it looks so functional.

Today's Fanpost of the Day comes to us from TR17, who disagrees with the Old Lion: Vitor Belfort's Claims That Only Brazil Does Post-Fight Blood Tests for TRT TUE's Untrue

On November 9, Vitor Belfort and Dan Henderson will meet at the Goiania Arena in Goiania, Brazil. The bout, a light heavyweight contest, will serve as the main event for UFC Fight Night 32. It will also mark the fourth time in five fights that Belfort has fought in Brazil.

That type of scheduling has raised some eyebrows in the MMA world, with some questioning if Belfort is being "hidden" in Brazil. Those questions revolve around the fact that some athletic commissions may not be willing to grant Belfort a therapeutic use exemption for his use of testosterone replacement therapy.

Belfort, appearing on Monday's edition of The MMA Hour addressed some of these concerns, specifically the question of if Brazil's testing for fighters with TRT TUE's is as vigorous as it would be elsewhere (via MMAFighting.com):

"Brazil is the only place that they do blood tests after the fight. Now, I'm fighting a guy who's on TRT too. They are very surprised that they will have to test blood too. Two months before the fight I have to do blood tests, at least once a month. I do that on my own every week too. It's important. I'm just trying to be fair with everybody and also with myself."

The problem with that statement is that it is only partially true. Brazil is not the only place that does blood tests for TRT. Nevada State Athletic Commission executive director Keith Kizer was contacted for this story and asked what the post-fight protocol is for Nevada regarding testing fighters with TUE's for TRT. Kizer responded by saying that Nevada tests "both blood and urine."

A minor misstatement on Belfort's part? Perhaps, but it just as well could be Belfort looking to control the direction of the conversation.

The other thing to consider is the question of who is going to perform the post-fight blood testing in Brazil. As Bloody Elbow's Brent Brookhouse reported last week. Brazil's only WADA accredited testing facility was suspended by WADA earlier in August.

According to Brookhouse's research, WADA's release on the situation said:

"WADA has suspended the accreditation of the LAB DOP - LADETEC / IQ - UFRJ Doping Control Laboratory (LADETEC) in Rio de Janeiro, Brazil. The suspension, which is effective as of August 8, 2013, prohibits the LADETEC from carrying out any WADA-related anti-doping activities."

Fair or not, Belfort and the UFC can expect the questions regarding Belfort to keep coming until he fights outside of Brazil.