Rare is there agreement across the board like there was for the top six spots in the current SB Nation heavyweight poll.

Since we last checked in, Fabricio Werdum and Travis Browne solidified their spots with convincing victories: Werdum's a dominant performance against Antonio Rodrigo Nogueira, and Browne's a breathtaking rally to knock out Alistair Overeem in Boston, which made him a no-brainer pick to enter the top 10.

With UFC heavyweight champion Cain Velasquez, former champ Junior dos Santos, and undefeated Daniel Cormier locked into the top three spots, and Antonio Silva with losses to Velasquez and Cormier while beating nearly everyone else in his path, the top six spots are sealed.

Each of the top six spots in the current poll were unanimous picks: Velasquez, followed by dos Santos, Cormier, Werdum, Silva, and Browne.

And with nothing going on among those top six until UFC 166 in Houston in October, when Velasquez and dos Santos meet in a trilogy fight, and Cormier takes on No. 9 Roy Nelson, those spots are secure for the time being.

In the meantime, the only two other fighters who were named on all six ballots, No. 7 Frank Mir and No. 8 Josh Barnett, square off on Aug. 31, giving fans of the big men something to look forward to in the interim.

(Official SB Nation rankings policy: Fighters under commission or company suspension are ineligible to be ranked during the duration of their suspension or if they have licensing issues. At the moment, this does not currently affect any heavyweight fighters generally considered to be Top-10 caliber). 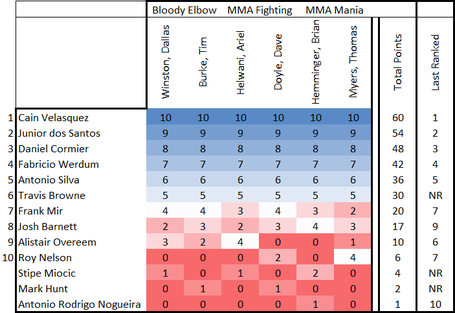 1. Cain Velasquez (12-1, 60 points): There's not much that hasn't already been said about Velasquez and Cain at this point and won't be much new until camps get started in earnest.

2. Junior Dos Santos (16-2, 54 points): See above. Title of greatest heavyweight fighter of their generation is on the line.

3. Daniel Cormier (12-0, 48 points): Cormier's done a lot of talking about eventually fighting Jon Jones. But if his fight with Roy Nelson is similar to his fight with Frank Mir, would the public buy it?

4. Fabricio Werdum (17-5-1, 42 points): Werdum had asked for the next crack at Cormier. Still nothing on deck for the winner of his past three and six of his past seven.

6. Travis Browne (15-1-1, 30 points): After a huge knockout of Overeem, Browne is no longer likely to be "the heavyweight everyone sleeps on."

7. Frank Mir (16-7, 20 points): Mir looked listless in each of his past two losses. Absolutely needs a strong performance against Josh Barnett to stay relevant.

9. Alistair Overeem (36-13-3, 1 no-contest, 10 points): Supporters can point to the fact he was winning his fights against Bigfoot and Browne. Detractors will point out how he's gassed in his fights since his steroid bust. Pick your side.

10. Roy Nelson (19-8, 6 points): Is it a little weird that Nelson is still ranked ahead of Miocic after Micocic had a dominant victory? Maybe. But Nelson can once again silence his doubters when he meets Cormier.