Eventually, Vitor Belfort is going to fight somebody. It just won't be Rashad Evans.

Days after UFC President Dana White floated the idea to reporters in Las Angeles -- stating, "[Belfort] doesn't want to fight Tim Kennedy? Let's fight Rashad at 205," -- Evans put the kibosh on the rumors before they could pick up steam.

Evans is of course referring to Jon Jones, the man who ultimately spurred "Suga" to leave Jackson's MMA a few years ago. Evans went on to co-found the Blackzilian camp in Boca Raton, FL, where he and Belfort both currently reside. So go ahead and toss that match-up straight into the trash.

Though a certain man from West Linn still has his eyes on this prize, so we'll just have to see how everything plays out on August 17th.

Evans won't fight Belfort. Rashad Evans killed any chance of a potential fight between he and Vitor Belfort while speaking to ESPN. "I won't fight Vitor. ... I won't fight anybody who I train with," Evans said. "I made that mistake before, and I won't do that again."

Ortiz hits TNA. The surprises just keep on coming. A day after announcing his arrival at Bellator 97, Tito Ortiz made an abrupt appearance at Thursday night's TNA Wrestling event.

Brinsa addresses rumors. In the wake of recent allegations, UFC signee Benjamin Brinsa vehemently denied any connection to neo-nazi groups via a statement on the UG: "I am not a neo-Nazi, never have been, never will be. At no time in my life have I ever made any xenophobic, anti-Semitic or racist statements, either in public or in private. Yes, I do have a past as a football hooligan in my youth, but that is a thing of the past as I have been solely focusing on my professional career for the past couple of years."

UFC 163 presser. Catch up on the latest from Brazil with video highlights of Thursday's UFC 163 open workouts and staredowns, plus our exclusive photo gallery.

Machida talks Silva. Lyoto Machida told Globo that the UFC may have pressured Anderson Silva into accepting a quick rematch against Chris Weidman. "He maybe didn't really want to fight for the belt again but the UFC demanded it," Machida said (via Fighters Only). "I believe it wasn't only Anderson's intentions that prevailed in this situation."

Every day is Christmas?!? Excuse me, moving to Canada real quick.

The tour keeps on rollin'. This time Ronda and Miesha took their traveling feud to Bristol for a live appearance on SportsCenter.

In case you missed it on Wednesday: The ol' bait 'n' switch. You got us, Bellator. Nicely done.

Jose Aldo was just 17 years old when he made his professional debut. Between the abrupt finish and the riotous ending, everything about this video is awesome.

Mike Barreras was the unlucky fella who fought Bubba Jenkins on Wednesday night. This is what he looked like in the hospital post-fight (via Reddit). 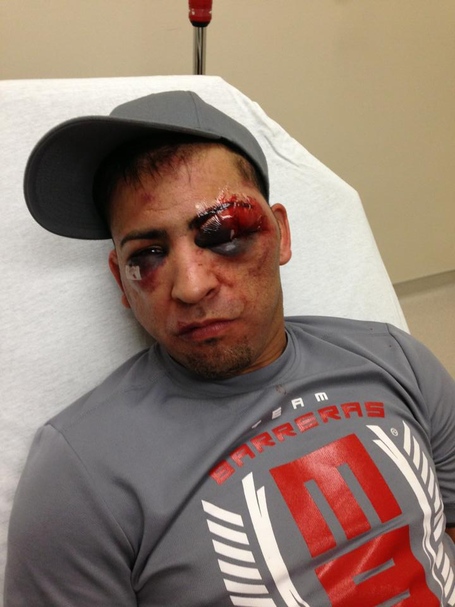 @DrofletNacnud b/c I've trained with this wrestler b4.. And I know he can't take me down. And I only get mad at the wrestlers that lay&pray

@MieshaTate do it! Can't wait! Next time you won't forget your place

One of Alexander's coaches said they would take my soul. That's my motivation!

I'm going to put your coaches foot right in his mouth. This is now personal, let's play

What will the critics say after this fight? Don't forget people, I asked for this fight.. http://t.co/yEhgJIRA0M

@Dzhambo So funny where did you find this picture

Today's Fanpost of the Day features the return of our old friend dpk875, for another edition of: Prospects to Watch this Weekend

Here are some of the better prospects in action this weekend

Rosholt is one of the top HW prospects in the sport of MMA. He was a 3 x All-American while wrestling at Oklahoma St. He still dances with the one that brought him when he fights, looking to use his wrestling to take it to the ground. Despite improving stand up, he still likes to take the fight to the ground, and work for GnP or submissions. This is Rosholt's 4th fight of 2013, but he is going to have to step of the quality of opposition if he wants to get a look from UFC.

Feist wrestled at Portland State while in college, and is now a member of Team Takedown. Feist has serviceable standup, but has a good transition from striking to takedowns. Gifford is a lanky fighter who is looking for the submission. All of Gifford's wins have come by way of submissions. He doesn't have much on the feet, and pretty much welcomes his opponent to take him down, so that he can start working for sweeps, and subs.

Parks was an All-American, and 4 x NCAA tournament qualifier during his time at Oklahoma St. He is now a member of Team Takedown, and this is his 3rd fight since his pro MMA debut in late April.

Shaffer spent 3 years wrestling for Iowa State before transferring to smaller Augustana for his senior season. He was a Division 2 All-American in his one season at the lower level. Shaffer claims he was fighting in unregulated Bar Room tournaments before he was 18 years old. He started out his official MMA career 0-2, but has won six in a row. Shinn Wrestled at Oklahoma St, and was a 2 x National tournament qualifier. Shinn was the better wrestler in college, but this one will likely come down to who has adapted their MMA game better. The winner of this is also a potential candidate to step back up to an organization like RFA where both have competed in the past, or Legacy Fighting Championships.

I first looked at Tobin a couple of weeks ago, but then that fight fell through. He is 5-0 with all his wins coming by way of 1st round submission. His game is trips, body locks to get the fight to the ground, and then he is looking for the submission to end it.

Thompson has finished all three of her opponents, including a Head Kick KO over Invicta fighter Bec Hyatt back in 2011. She hasn't been the most active fighter, fighting once a year in 2010, 11, and 12. Mangakahia has a submission victory in her pro-debut.

Ricardo "Demente" Abreu improved to 4-0, with his 4th straight 1st round stoppage.Allan Nascimento picked up a submission win over Julio Rodrigues, and improved his record to 9-1. Thomas de Almeida pulled out of this event, and did not compete. This was not totally unexpected, as Almeida had already picked up 2 wins in July, and was briefly rocked in his last time out. Also his scheduled opponent only had a 3-6 record, so it would have done nothing for his stock as one of the better prospects in the sport.

Yuta Sasaki scored a 11 second KO , and improved to 13-1-2. This guy should be on the radar of UFC, Bellator and OneFC.

Joseph Pacheco improved to 7-0 with a UD victory over Amaechi Oselukwue.

James Wood dropped to 7-2, when he was TKO'd in the 2nd round by UFC vet Brian Foster. Brian Houston (4-0) only needed 48 seconds to TKO Jett Jones, and has only needed 1:21 combined to win his last two fights. While Jones is no world beater, remember Houston's name, I like what I've seen to this point.

Portuguese prospect Artur Lemos improved to 5-0 when he got a RNC submission victory over Pedro Carvalho.

Bubba Jenkins (4-0) and Jeremy Kimball (10-3) picked up TKO victories.Shawn Bunch improved to 2-0, with a split decision victory over Russell Wilson.