Between the UFC's continued World Tour and Bellator's bizarre introduction into the pay-per-view game, yesterday turned into one of the busiest Wednesday's in recent memory. But before we get into specifics, let's briefly run through two nuggets that got buried under the sea of news.

First, UFC President Dana White told our own Ariel Helwani that he's considering booking Robbie Lawler as Rory MacDonald's next opponent. Then he delivered the following update to the ongoing saga of Nick Diaz's retirement.

"I had a conversation with Nick a few weeks ago, and then all this stuff came out that we had talked about a fight," White said. "You know, that's not true. I'm actually waiting for a call back from Nick Diaz. Nick Diaz is supposed to be calling me back after out last conversation, and then we'll see."

And with that out of the way, let's jump into some headlines.

Rampage-Ortiz on PPV. Oh yes. That Rampage Jackson vs. Roy Jones Jr. rumor you heard? Well, it was half right. Instead, Jackson will fight Tito Ortiz on November 2, 2013 for Bellator MMA's debut to pay-per-view. Declared Ortiz: "The dream match up is happening."

Hendricks out to break jaws. A four-time All American wrestler with thunder in his left hand, Johny Hendricks is undaunted by the challenge that awaits him. He knows the strategy Georges St-Pierre will employ, and he welcomes it.

"Since the change in opponents, we changed a few things to adapt to his game. To fight the 'Zombie' we will use different things. Everything is in its place." -- Jose Aldo, previewing this weekend's throwdown in Rio.

Ladies and gentlemen, I give you the latest edition of 'Be Careful Who You Try to Rob.'

Apparently four years ago Chung Sung Jung fought a gentlemen with a 187-23-19 record in a kickboxing match for It's Showtime. Folks, this is a good one. (Fight starts at 5:54.)

Man, the knockouts that you don't see coming, those are always the best. 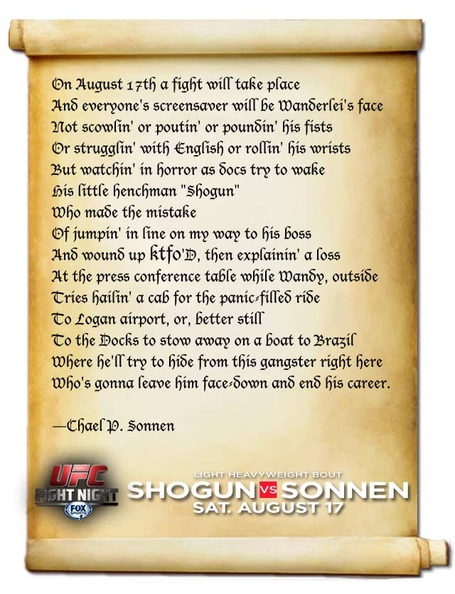 The dream match up is happening. No need for an easy fight. Tougher is better for the fans. @Punishment99 http://t.co/ti6ajjkTcK

This is what I have to deal with everyday in practice @Benaskren is a beast on the ground !!!

Ben Askren, one of the last specialists in our sport. #Bellator

Asken & Chandler are seriously gifted fighters. Both put on clinics in different ways. One takes your will, the other your consciousness.

Folks commenting about the ridiculous editing of the @SYFY show, I agree with you 100% and we're working on eliminating that.

"@gianbardales: @brucebuffer what's the weirdest occasion where someone's asked you to say "its time!" ?" "The birth of a baby by parents"

Today's Fanpost of the Day is a tremendous two-parter from Steve Borchardt: An MMA Fan's Notes: How I Learned to Stop Worrying and Love Anderson Silva

If I'm being honest with myself, I suppose it all started with that dance.

When Anderson Silva made his UFC debut back in June of 2006 and knocked out Chris Leben in less than a minute, I was pissed. It wasn't so much that Silva made one of my favorite fighters look like a stumblebum off the street whose only prior combat sports experience was shadow boxing in front of the bathroom mirror while blasting Bill Conti's "Gonna Fly Now" at neighbor-annoying volume. Fighting is the ultimate game of chance and I could accept it as one of many logical outcomes to that game when Silva brutalized an obviously outclassed Leben with a series of pinpoint combinations en route to a consciousness-severing knee. What I couldn't accept was Silva's reaction to his handiwork.

If you blinked you missed it, but for some reason the image remained indelibly etched in my brain for the next six years. As the ringside physician tended to the insensate Leben, Silva ran towards the cameras with both arms rigidly extended in front of him like a vision of Boris Karloff's Frankenstein monster on methamphetamine. That's when it happened: Silva broke into a victory dance that combined the lascivious pelvic gyrations of a male stripper with some awkward air guitar heroics straight out of Bill and Ted's Excellent Adventure.

One wouldn't think two seconds of bumping, grinding, and imaginary fretboard wizardry would provide a solid basis upon which to form a judgement of a person's character, but that's exactly what I did. Through some metaphysical miracle that spits in the face of Newton's Second Law of Motion, the moment Silva sent Leben's brain throttling up against the inside of his skull like a crash test dummy thrown against the windshield of an SUV, he simultaneously delivered a jolt to my cranium that overloaded whatever cerebral circuit breaker it is that governs rational thought. I was disgusted by what I perceived as Silva's smarmy self-satisfaction in victory. In my mind at least, that dance offered incontrovertible evidence he was a complete asshole.

From that night forward I went into every Anderson Silva fight brimming over with anticipation, like an overfull pint of beer that splashes over the rim of the glass with each step you take. I was dying for Silva's unpardonable arrogance to come back and bite him on the ass.

I would be left waiting a long time.

To better understand my antipathy towards the greatest middleweight in the history of the sport, indulge your humble author in a glance back at the state of his life when Silva was beginning his UFC run.

Like many young people who make their first tentative steps upon life's career after spending their formative years ensconced in the protective cocoon of scholastic endeavor, in the summer of 2006 I was already beginning to be disabused of certain notions I had theretofore found myself blissfully suffering under. To wit: The ability to crank out A-level papers with the instinctive ease of a cat in heat giving birth to a litter of kittens doesn't mean shit in the real world.

This lesson came by way of my first full time job after graduation. My plan had been to find a gig teaching English in Tokyo as soon as possible, but in order to save money I found myself working as a clerk in a law firm. I took to it like a duck to a tank of crude oil.

The job made me feel like I had come out on the losing side of a gamble with fate by laying all the chips my student loan procured for me on a major as esoteric as Japanese. If you wanted someone to parse a short story by an Okinawan magical realist author for symbolism related to the abundance of US military bases on that island and the concomitant sense of disenfranchisement they engender among the Okinawan people, I was your guy.

Not a single employer wanted that though. In the case of the firm I worked for, what they wanted was for me to make copies, deliver inter-office mail, and keep the rest of the staff supplied with what they needed to most efficiently protect the interests of the firm's wealthy clients.

My ego throbbed with indignation at the thought of doing what I considered menial labor. When I first enrolled in college I never imagined I would be putting my degree to use mopping floors yet here I was doing just that. The most humiliating part of my day was delivering mail to lawyers who were just a few years older than me and were already driving Mercedes to work. It made the bus pass in my wallet feel like a badge of shame.

The denouement of this all too typical tale of unrealistic expectations exacerbated by a rampant sense of entitlement?

I was eventually fired for spending too much time in the bathroom listening to my iPod.

I didn't suspect it at the time, but life in the real world had only begun to kick my ass.

Check out the rest of part one here, then click here for part two.