Everyone's favorite British middleweight villain spoke to MMA Sentinel recently about every topic under the sun, from the rumors of him being knocked out at Freddie Roach's Wild Card Gym to taking acting roles. The most interesting comments, however, came when he turned to avenging losses.

"I would love to rematch all the guys that have a victory over me," Bisping said. "Chael is one of them, Rashad, Henderson, Vitor ... I'd love to fight them all. I'd love to get another crack. After every loss I've gone back to the drawing board, so to speak, figured out what went wrong, and I've come back as a better fighter.

"Dan Henderson? I know I'd definitely take care of him. Chael? I beat him the first time, but I'd make it even more unanimous in the second. Vitor? I was doing very well until I got caught with a head kick, so I've adjusted for that as well. I believe I could beat everyone that has beaten me up until now. They beat me on the night, so fair play to them, but I would love a rematch with any of those guys."

Of course, what would we expect him to say? That he can't beat Henderson no matter what? It's only natural to believe he can win rematches. Besides, the guy was brutally knocked out. For him to still be this confident about his second chances demonstrates some fairly insane mental fortitude on the part of The Count.

Now, whether he could actually win a rematch, well, that's a different story altogether.

The MMA Hour. Our own Ariel Helwani had a ton of guests including Strikeforce and UFC veteran Paul Daley, Ricardo Lamas and many others. Be sure to watch the entire thing.

Unified Rule changes coming. The Association of Boxing Commissions is considering a rule to, in a limited circumstance, allows knees to the head of a grounded opponent.

GSP blames Ellenberger. If you ask the welterweight champion Georges St-Pierre who he thinks is to blame for the boring fight on Saturday between Jake Ellenberger and Rory MacDonald, his answer is pretty straightforward.

Dana White talks Biogenesis. A steroid scandal could badly affect MMA and the UFC, and the UFC President is particularly thrilled about the possibility.

GSP 'shaken' by Silva loss. The welterweight champ said the middleweight champ's loss is a wake up call and a reminder even the tiniest of mistakes can cost you dearly in this sport.

Here's video of Jon Jones stuck in an elevator. Not really, but you get the idea. Just watch it:

John Dodson was on American Ninja Warrior recently and didn't do half bad for a guy who fights instead of parkour:

Neil Melanson says Bellator lightweight champion Michael Chandler is the best lightweight in the world and it's only a matter of time before people see it:

Here's a UFC on FOX 8 'backstage pass' if you're into that sort of thing:

Apparently a phantom cam is one that's able to shoot stuff is super slow motion. So, here are the phantom cam highlights from UFC on FOX 8:

The trick to the Tito Ortiz gravedigger is that you're supposed to do it not only after a fight, but after you win a fight. This guy doesn't seem to understand that: 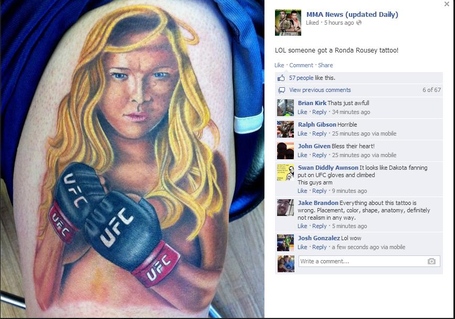 My cat swiped an entire T-bone steak off my plate tonight and took off running with it. I caught him and considered feeding him coyotes

Hey that's my belt! I'll be back to get it Nov 16. pic.twitter.com/omefFCDaku

Today's FanPost of the Day comes to us from heavyfl0w who recaps the action from UFC on FOX 8 in only the way he could:

2. Robbie Lawler looked impressive, but to quote The Wolf from Pulp Fiction, "lets not start ....., gentleman."

Not to rain on anyone's "Wow, Robbie Lawler is turning into a contender!" parade ... but it's Bobby Voelker, fellas. Bobby Voelker is exactly the kind of guy that Robbie Lawler should light up, and light him up he did. Granted, Voelker isn't always a prime candidate to go out and get decapitated the way he did, but he was the replacement of a replacement, and it showed. Had Robbie fought Tarec Saffedine (or Siyar Bahadurzada), I think we'd be singing a different tune. He could have potentially beaten those guys, but I don't see him handing them one sided rounds full of embarrassment.

On top of that, almost no one could have predicted that Robbie would beat Josh Koscheck, but I think Koscheck still wins that fight way more than he loses it.

I don't want people to get the wrong idea here. Make no mistake; Lawler has rightfully turned heads since his return to the UFC. I LOVE Robbie Lawler. He's been one of my favorites for a long, long time. I'll never forget being in Vegas for PRIDE 32 and watching him flying knee Joey Villasenor's head off to conclude the first fight of the night. He's one of the most devastating punchers this sport has, and he deserves as much respect and admiration for his mini-run as anyone can possibly give.

But I'm a realist. He's going to fight some of the more stern wrestlers at 170 at some point, and they're going to take him down and beat him on top. He's prone to getting tapped, and even in the stand up, he's had stretches in his career where he seems a bit disinterested. He's lost fights he shouldn't have lost.

3. I have a new rule of thumb: Anytime I feel a certain way about a fight, fighter, situation, etc., all I have to do to change my mind is read Dana White's take.

I didn't necessarily want to change my views on the Rory MacDonald-Jake Ellenberger scrap, which devolved into a pithy festival of boos midway through the fight. MacDonald certainly didn't blow my socks off with his performance, but I wasn't exactly cursing at my TV, either. Basically, it was a ho hum affair that one man completely dominated with an impressive jab. It just would have been nice to see Rory open up a bit more.

Then, I saw this headline, courtesy of mmajunkie.com:

My internal monologue screamed "Don't click on it, dummy". As is always the case with a headline like this, whatever Dana got on the mic and started spitting about would upset me. And not even necessarily because I disagree with what he's saying. There was no good reason to click on this headline. It would have been like a stranger walking up to me and asking "Hey nephew, would you like to be upset for literally no reason at all?" I shouldn't have clicked on it.

I clicked on it.

"When you get these fights where guys talk s-t, those fights always suck," White said of the bout. "I think that for Ellenberger to go out and say [MacDonald] doesn't deserve to be in the top 10 and then not go out and try to prove that he doesn't belong in the top 10...Ellenberger literally did nothing.

"And in my opinion, Rory didn't do anything to try and finish him and put a stamp on it and make a statement, not only to the world, but to the guys that are in the division."

.. Prior to the bout, the two built the fight into something of a grudge match by sparring on Twitter. Ellenberger, in particular, was particularly vocal in attacking MacDonald's credentials.

But, as White complained, his "punch stats were almost zero."

Yeah, Dana, Ellenberger didn't go out and try to prove that he belonged in the top ten! His loss had nothing to do with the fact that Rory MacDonald used his reach to stick a jab in his face a nullify whatever he was trying to do, confusing him to no end. He just didn't try!

Now that I have Professor McFucklesticks's take on the fight, I now consider it the best performance of Rory MacDonald's career, and I also consider him the greatest fighter who ever lived.

4. Demetrious Johnson is taking small steps towards becoming one of the best fighters in the UFC.

He's really developing a knack for taking a fight over and leaving absolutely no doubt in judges harebrained heads as to who is winning the fight. He didn't do much on the feet against John Moraga, but he didn't need to. He had such a gargantuan advantage in the wrestling department that he just kept going to the well until he willed himself to a nice armbar finish. You could tell he really wanted that finish badly, and against a relatively overmatched opponent in Moraga, the risk in going for it was justified. I'm never going to pooh-pooh someone for being a "decision fighter", but it was definitely refreshing to see DJ get the tap. I love watching this dude.