One thing's become clear since we last checked in with the featherweight division: The 145-pound weight class is well on its way to become one of the sport's deepest.

Unfortunately, we were deprived of a much-anticipated Ricardo Lamas vs. Chan Sung Jung bout when the latter was bumped up into a bout with UFC featherweight champion Jose Aldo Jr. on Aug. 3.

But UFC 162, for which the bout was originally scheduled, still shined through as a feathweight showcase. Frankie Edgar's unanimous decision victory over Charles Oliveira and Cub Swanson's thrilling comeback win over Dennis Siver gained co-Fight of the Night honors on a Las Vegas evening in which Chris Weidman's victory over Anderson Silva otherwise dominated the headlines.

Edgar, after his victory, stayed exactly where he was the last time we compiled the SB Nation featherweight list: tied for third place with Lamas, behind Aldo and Chad Mendes. Swanson, with his fifth straight victory, vaulted up from No. 9 to No. 6, putting him squarely in the discussion on the list of top title contenders.

And we're far from done sorting out the picture. Aldo takes on a live underdog in "The Korean Zombie" on Aug. 3. No. 2 Chad Mendes faces No. 9 Clay Guida at UFC 164. And No. 8 Dustin Poirier meets Eric Koch, who is just outside the top 10, in September.

So fasten your seat belts, because it's clear the featherweight race is on.

(Scoring: Fighters are given 10 points for a first-place vote, nine points for a second, etc., down to one point for 10th place. The results are then tallied up and presented here. Official SB Nation rankings policy: Fighters under commission suspension are ineligible to be ranked during the duration of their suspension or if they have licensing issues. This does not affect any featherweight fighters under consideration at the moment). 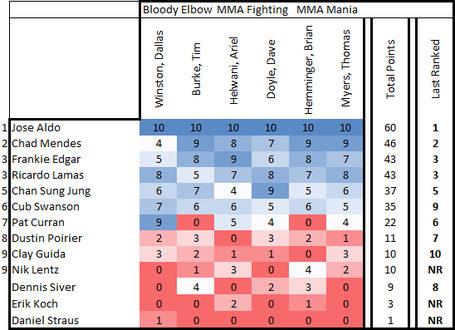 3t. Ricardo Lamas (13-2, 44 points): Still no word on a next move for Lamas, who at this juncture might as well wait and see how Aldo vs. Jung plays out.

3t/ Frankie Edgar (16-4-1, 44 points): It's too soon to give Edgar another title shot, so like Lamas, it's in his best interest to see how things shake out over the coming weeks before presumably returning to action around the end of the year.

5. Chan Sung Jung (13-3, 37 points): TKZ has made a career out of overcoming underestimation. Coming off more that a year off due in part to shoulder surgery and facing his toughest task, he'll have his biggest chance to prove doubters wrong yet.

6. Cub Swanson (19-5, 35 points): After five straight victories, four via finish, it's clear Swanson can no longer be considered the same fighter who lost to Aldo and Mendes.

7. Pat Curran (19-4, 22 points): Has all but cleaned out the Bellator featherweight division with victories over Patricio Freire and Shabulat Shamhalaev.

8. Dustin Poirier (13-3, 11 points): A fighter who once seemed to be The Next One at featherweight now needs a victory over Eric Koch simply to stay in the top 10.

9t. Nik Lentz (24-5-2, 1 NC, 10 points): Lentz is likely never going to make a list of pound-for-pound most exciting fighters, but there's no denying his effectiveness after three straight victories.