As we roll into another lazy MMA weekend, it's probably a good idea to stop and enjoy the silence, if only for a moment, because pretty soon this schedule is about to explode. Next Monday kicks off a blistering six-week stretch highlighted by five UFC events, the return of WSOF, and potentially the most stacked Bellator card in the promotion's history.

So if you have any lingering chores or projects you've been procrastinating, I'd advise you get them out of the way over the next few days, otherwise they may became another casualty to this ridiculous MMA summer. Now with that said, let's jump aboard the Friday express and get to some headlines.

Diaz update. According to UFC President Dana White, "Nobody at the UFC talked to (Cesar) Gracie or anyone else that reps Nick (Diaz)." Gracie told BJPenn.com on Wednesday that Diaz had an "offer on the table" to return to the UFC.

Shamrock on Fight Master. Frank Shamrock returns to recap the latest episode of Fight Master, from picking a wildcard fighter to the ranking system that devolved into a seven-hour war of attrition.

So, Chris Weidman's most embarrassing memory is probably the best thing I've heard all month.

For once, the top YouTube comment sums this video up nicely: "Fox Sports 1, where you'll never﻿ see GSP, Anderson Silva or Jon Jones fight but we'll sure as hell use them as a promo."

"He made a comment on there about, he didn't know how hard I hit. He didn't know if I hit harder than Tito because I never hit him. So, I was excited to try to make him feel that punch." -- Chuck Liddell reminiscing on his second duel with Captain America.

Okay folks, this one is just a warm-up for what's to come.

Now this is what I'm talking about. Brutal.

Props to @KnockoutFootage for both of those finds.

Scariest woman on the planet? Hard to argue against it.

This is pretty cool. Who's the most likely bonus winners on a UFC card? The folks over at Fightnomics compiled nine years worth of data on the very subject. No question, it pays to be fighting on the main card. (Click to enlarge.) 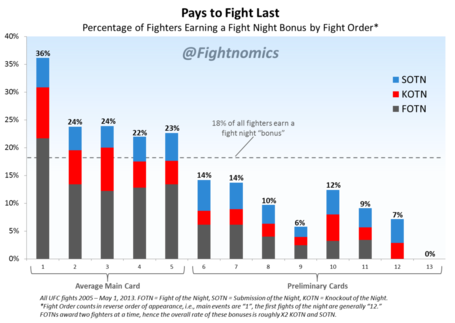 Misquoted on @bjpenndotcom. No new contract or new bout agreement.

PUT IT TO BED

Not true RT @Jaicin .@FreddieRoach is it true that Michael Bisping was knocked out in a sparring session at your gym in LA?

So ol roynelsonmma was taking a little too long so I wrote up bout agreement for him http://t.co/F3EyOdzwDm

Here you go @roynelsonmma , u get the idea. @danawhite Ur job is done congrats on the new deal Roy DC pic.twitter.com/yKmZ9XRpDc

At the ESPY after party, I HAD to take a picture with her! She's not standing on anything, great lady! http://t.co/7R0N9CFRol

Props to ‏@MightyKatrani for the find.

Today's Fanpost of the Day is the latest edition of dpk875's: Prospects to Watch this Weekend

Caldwell was a National Champion wrestling for North Carolina St., and if not for injuries, he likely would have won even more. The sky is the limit for Caldwell in MMA, but the question is going to be can he stay healthy. For more on Caldwell's amazing talents, check out the piece Mike Riordan did on him a few months back.

This is Holm's first MMA fight since she retired from professional boxing to pursue MMA full time. She was long considered one of the best female boxers in the sport, and also has experience kickboxing so it isn't hard to guess that she will look to keep this fight standing. She is working with the team at Greg Jackson's camp, and with her focus solely on MMA we should start to see more progress on her Takedown defense, and rounding out of her MMA skills.

Tobin has finished all of his fights by 1st round submission. He has serviceable striking, but uses trips, and body locks to get the fight to the ground and then it is game over.

Arish is a fighter of Iranian Heritage who got a very late start in MMA. He is 38 years old, but all 21 of his fights have come since 2009, and he is on a 8 fight winning streak right now. I was not going to list him due to his advanced age, but a win over Mason could get him some interest from either Bellator or UFC, similar to the way Antonio McKee gained some interest in his late 30s.

Roberts has rebounded from his only pro loss, with 2 straight stoppage victories. He was struggling in his bout against Jack Mason before pulling off an armbar submission in the 2nd round. He will struggle against better wrestlers, but has enough stand up to hold his own.

Fishgold's game is grappling, and anytime he is standing is just to close the distance enough to go for a body lock, or another takedown attempt. Once on the mat, he is very good at keeping the dominant position, and taking whatever submission his opponent gives him.

Souza has finished all of him opponents to this point, 3 with Arm bars, but will step up in competition against Vinicius. Vinicius avenged his only loss last time out by picking up a submission victory over Sidney Oliveira. There is a wealth of good, flyweight talent in Brazil, and the winner of this fight could be in line to face some of the more established Flyweights.

Ray Wood improved to 4-0, and won the New England Fights Featherweight title with a 1st round Submission victory over Lenny Wheeler (6-3). Matt DesRoches (5-0) picked up a 1st round armbar submission over Jon Lemke (3-1)

Tyler Manawaroa improved to 10-0 with a first round submission victory over Taipari Rikihana. Cam Bracewell (3-1) was derailed and stopped, when Chris Lokteff locked in a Rear Naked Choke in the 2nd round.

Thomas de Almeida is now (12-0) with 12 first round stoppages after getting a KO over Valdines Silva. He was in a little bit of trouble in this fight, but still finished in the 1st round. It will be interesting to see if Almeida is cleared for his 3rd fight of the month scheduled against Ricardo Sattelmayer on July 27th.

Felipe Douglas (6-1) failed in his first step up in competition, as he was stoppaged by Vinicius Zani.

Takahiro Ashida (9-1-2) picked up a Majority Decision for his 7th straight win.