As the final few days of June trudge forward and the bounties of July's MMA schedule creep closer, we're here like always to provide you a shot-in-the-arm to another weekday morning. There's ton for us to get to today, so without wasting anymore daylight, let's dive right in with some headlines, starting with the last living wizard on Earth.

Silva talks GSP, future. Speaking on a UFC 162 conference call, middleweight champ Anderson Silva discussed the chances he fulfills his new 10-fight contract, what exactly went wrong with his failed superfight bid against Georges St-Pierre, then waxed philosophical about his upcoming title defense. "Whatever I should have done in the sport, I've already done," Silva said. "Win or lose, I've already done everything there is to do. Now it's just a matter of doing what I love to do."

Weidman update. Chris Weidman will be without head coach Matt Serra at UFC 162 due to Serra's current medical condition. Replacing Serra in Weidman's corner will be the middleweight contender's father, Charlie Weidman.

Tate in next 'Body Issue.' Following in the footsteps of Ronda Rousey, Cris Cyborg and several others, Miesha Tate is scheduled to appear nude in ESPN the Magazine's annual 'Body Issue.' This year's edition hits newsstands on July 12.

"I will fight anybody at anytime, but every time my phone rang, I would think, 'Geez, I hope they're not going to tell me I got Chris Weidman.'" -- Chael Sonnen.

This gets pretty silly right around when they call John Dodson an MMA legend, but you'll still probably pick up a few tidbits from the first half.

Well that was just mean.

Whoa, this one is scary. According to YouTube the guy's doing alright, but still, damn...

Seriously folks, we've said it before, but Tarec Saffiedine's 2-year-old son is going to be a beast.

I already know why it's not legal in NY, @danawhite. You keep blocking every attempt at a fighters union, firing everyone who suggests one.

.@danawhite The unions are headquartered in NYC, and you can't get in Without bowing your head to them. Your inflated ego won't allow you...

.@danawhite so you resort to getting smart people to write spin-propaganda, painting them in a bad light, while your monopoly marches on.

@drewhenderson WHEN YOU BUY OUT ALL THE COMPETITION POSSIBLE, LEAVING ONE JANKY SHOW AVAILABLE, AND NO UNION, THAT IS BASICALLY A MONOPOLY.

@bader3245 THERE IS NO WHERE ELSE TO SIGN YOU IDIOT LITTLE KID. NO WAY TO NEGOTIATE. THEY OWN EVERYONE'S LIKENESS, FOREVER. Except mine.

@bobber75 I avoided then for a decade, UNTIL THEY BOUGHT EVERYONE ELSE

Anderson and Georges should be making Mayweather money. Even a bum like me should be able get his bum knee fixed, when I hurt it on live TV.

@tannerh01 THEY ALL HAVE PLAYER ASSOCIATIONS. THEY ALL MAKE 50% of the profits. Gsp is happy with 1%

Piece of shit corporation led by an insecure Chub. Won't take responsibility for his missteps and will fall harder than anyone.

Since the MMA sites are picking up my rants, include that I will be speaking at TEDx on the 29th. http://t.co/TyV7K6C5bi

Don't count on seeing @BrendanSchaub on the Maury Povich show anytime soon. Cuz after we fight next month, he'll know exactly who his dad is

ONE MORE? SURE, WE'LL GO WITH ONE MORE

Rory MacDonald: somebody who's been broken more times than the weekend curfew at the dorms at Vassar

Today's Fanpost of the Day comes to us from RaTheGod, who writes: The Spider's web: Anderson Silva's 10 title defenses (Pt.1)

Since shocking the MMA world with effortless destruction of betting favorites and middleweight kings, Chris Leben & Rich Franklin (the former via 100% accuracy) the man known as "the Spider" has racked up a laundry list of records and accomplishments. In my opinion the most impressive of said accomplishments is his unprecedented 10 (11 if you count fat Lutter) tittle defenses. Let's look back at every one of those defenses shall we? I try to capture the atmosphere surrounding the matches, along with commentary detailing the action and GIFs of notable moments. Without further ado, i present to you, The Spider's web:

Act I - The Chosen one, Nate "the great" Marquardt: Only 3 fights into his reign of terror and many fans were already eager to see the champ dethroned. Many believed notable cheater former King of pancrase and Greg Jackson product, Nate "the great" Marquardt would prove to be too much for the Spider, who was coming off a less than stellar(by his standards) non title affair against the Micheal Jordan of BJJ, Travis Lutter. Marquardt's wrestling background, BJJ blackbelt, and more than serviceable striking had many believing he was the one. The great Luke Thomas summed up the beliefs of many with a one line prediction, "Nate will upset Silva and become the new champion." Needless to say, "UFC 73: Stacked", which featured names such as Sean Sherk, Tito Ortiz, Rashad Evans, Heath Herring, Kenny Florian, and Antonio Rodrigo Nogueira, amongst others had the attention of MMA fans everywhere. If their weigh-in stare down was any indication Silva vs. Marquardt was going to steal the show. 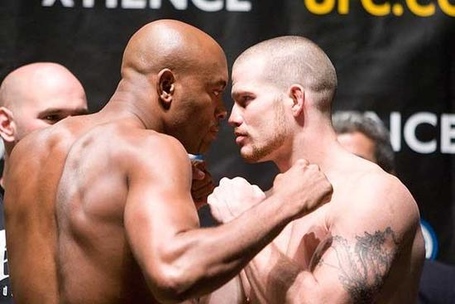 7/7/07- Fight Night: (ARCO Arena - Sacramento, California) The restless crowd was eager for some action, Rashad Evans & Tito Ortiz just fought to a weird draw, before that, Sean Sherk retained his title in a lackluster 5 round affair against Hermes Franca. The pre fight hype package shows both guys predicting victory by K.O, most notably Nate predicting dominance on the ground. The challenger enters, looking cool, calm, and collected, doing a little shadow boxing. The champ enters & is all smiles, Joe Rogan utters the phrase that will live on in infamy "This guy's striking is like a ballet of violence". He also notes that Silva had double knee surgery 11 weeks prior to the Lutter fighter, and was walking like "he got double knee barred" when he saw him in the hotel, post fight.

Silva takes his time, jogs in place for a while then literally sprints to the prep point. He strips down, jokingly puts his hat on the head of one the commission guys that accompanied him and laughs, he's insanely relaxed. Two white girls in the front row dance awkwardly to his entrance music, it's in Portuguese, all i understand is "spider Silva, spider Silva". In the cage, Bruce Buffer plugs a bunch of stuff including "I now pronounce you Chuck and Larry" lol. The fighters are introduced, Silva gets a nice pop and couldn't contain his smile, he lives for this. He nonchalantly walks to center cage to hear the ref's instructions, Big John McCarthy is in charge of the action.

Challenger and Champ touch em up, the champ bows to the challenger then to the crowd as if to say "you're welcome" in advance, then goes back to his corner. 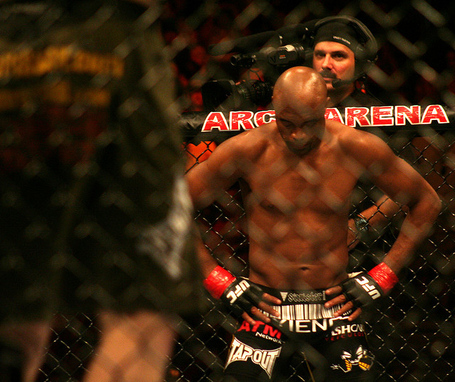