T.J. Grant's swift and decisive finish of Gray Maynard at UFC 160 was a no-doubt-about-it statement that he belongs on the short list of UFC lightweight contenders.

With five straight wins since dropping to 155 pounds, Grant will get the next shot at Benson Henderson's title at a time and place to be determined.

But despite the impressive resume, that's still not enough to keep Gilbert Melendez from being ranked No. 2 at lightweight behind Henderson. Melendez, who dropped a questionable split decision to the UFC champ at UFC on FOX 7 in San Jose on April 20, was a unanimous choice for No. 2 among the six voters on this month's SB Nation panel. Grant was a clean sweep for No. 3 after last being ranked No. 8.

I can only speak for myself and not the entire poll, but as soon as they're eligible, I'm putting Healy and Diaz right back where they were, at No. 7 and No. 8, before the suspensions.

The beneficiaries of Healy and Diaz's suspensions are Khabib Nurmagomedov and Rafael dos Anjos, who finished in a ninth-place tie with 11 points each.

(Scoring: Fighters are given 10 points for a first-place vote, nine points for second, etc., down to one point for 10th place. The results are then tallied up and presented here. Official SB Nation rankings policy: Fighters under commission or company suspension are ineligible to be ranked during the duration of their suspension or if they have licensing issues. Presently, this applies to Pat Healy, who is under suspension in New Jersey; and Nate Diaz, who has been suspended by the UFC. Also, Anthony Pettis is ineligible at lightweight due to the fact he is scheduled to fight at featherweight next). 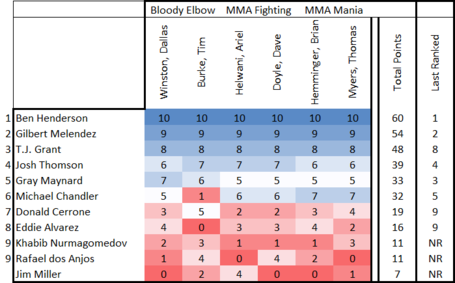 1. Ben Henderson (19-2, 60 points): Is Grant the fighter who can solve Henderson's Rubik's Cube of a fighting style? We'll find out soon enough.

2. Gilbert Melendez (21-3, 54 points): Until a matchup otherwise is announced, I'll continue to lobby for that Melendez-Healy fight we were supposed to see in Strikeforce last September.

3. T.J. Grant (21-5, 48 points): At this point, it's fair to say Grant has put together the best "drop down from welterweight" run since B.J. Penn himself returned to the division and won the title.

5. Gray Maynard (11-2-1, 1 no-contest, 33 points): Back to the drawing board for Maynard after what appeared to be a lack of respect for Grant's standup game backfired in a hurry.

7. Donald Cerrone (20-5, 1 no-contest, 19 points): Cerrone's UFC 160 performance against K.J. Noons is the type he usually has against fighters on Noons' level. The problem is with the guys he faces the guys at the top of the division.

9t. Khabib Nurmagodemov (20-0, 11 points): One could make the case that KB's 21-takedown performance at UFC 160 was as much due to Abel Trujillo's takedown defense as anything else, but still ... 21 takedowns is 21 takedowns.

9t. Rafael dos Anjos (19-6, 11 points): Dos Anjos has flown under that radar more than any fighter this side of Grant. His decision over Evan Dunham on May 18 was his fourth straight victory.