There was much to love and hate about UFC 161: Evans vs. Henderson from Saturday night. On the plus side, a new heavyweight contender was born, fighters found redemption and a crowd was moderately entertained. Yet, there were terrible decisions, boring fights and a lot that felt underwhelming.

Least Likely to Stem the Tide of Piracy: UFC 161

An article came out on Monday detailing the UFC's ongoing efforts to curb piracy in the Las Vegas Review Journal. It underscored deals the UFC has worked out with Justin.tv and Ustream along with software it uses to trace those posting copyrighted content.

For all their rightful efforts (ones I hope succeed), they're going to need them. That's not only true because of the technological options that exist for those pirating content, but because of UFC 161.

Much of what damaged the UFC's card in Winnipeg was beyond their control. I still maintain they run too many shows, but it's fair to say the UFC just got unlucky here. The problem is UFC fans don't always draw distinctions between what's the UFC's fault and isn't. If the UFC charges pay-per-view prices for a sub-pay-per-view quality card, the natural response from some fans is going to be a reach towards piracy. I'm not condoning the move, but I'm also not going to pretend it doesn't happen. I'm also not going to pretend those that pirate UFC content are not fans while those who don't are the true believers. It's largely the same group with a host of interchangeable members.

I hope the UFC is successful with their efforts to stamp out piracy, but we should also acknowledge the more they ask fans for money on content that doesn't deliver on expectations or performance, the more those fans are going to be selective about purchasing future events. The good and bad news, however, is that they won't be selective about what they end up watching. 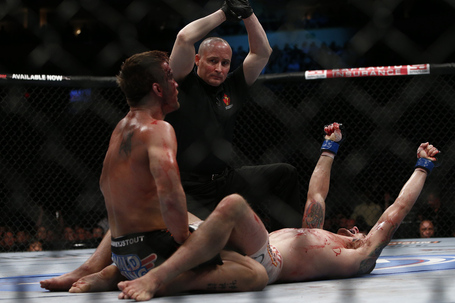 I can distinctly recall when there was belief Krause would amount to something noteworthy once he entered MMA. Reed Harris was on my radio show and we discussed all the potential he had. Much as MMA is wont to do, Krause fizzled and moved onto the regional scene. But somehow, someway, he clawed his way back. He also got a lot better, partly justifying the early belief many had in him. The picture above encapsulates the long road back to where he was supposed to be all along. I even enjoy how the referee is looking at Sam Stout while amidst 15,000 fans in the MTS Centre, Krause almost appears to be enjoying a private moment.

It is much harder to attack with submissions than it is to defend them. That's why most submission attempts end in failure. Yet, it's inherently an offensive maneuver. If someone is threatening with submissions - and by that I mean locking them up or nearly locking them up and forcing the opponent to abandon their offense or position to defend it - that person is the one winning in those moments. String together enough of them for long enough portions of a round and you shouldn't lose.

'Shouldn't' being the operative word. In what can only be described as comically inept judging, Jason Rodgers and Sal Signorino found a way to watch Yves Jabouin struggle round after round with near submissions and Dustin Pague's utterly dominant positional control to award the Canadian fighter two of the three rounds on Saturday.

I'm often asked if fighters should get points or acknowledgement for escaping submissions. The answer is yes, of course, but not nearly as many as the fighter who is close to locking the submissions in. If I'm being forced to escape your triangle, I'm required to act immediately and evasively to your offense to avoid being stopped. That not only means the fight is in danger of ending on my opponent's terms, but the entirety of my game in those moments is, by definition, defensive.

Awarding that bout to Jabouin would be hilarious were it not so cruel.

Your personal misfortune is of no concern to others. And by 'your', I mean my. You, me, all of us. Our personal suffering almost always only speaks to it's host, never the outside world. But there is a kinship in misery. If you've been swallowed by despair, you can recognize it in others. And if you're one of the lucky ones who found a way to crawl back into the light and discovered a reason to pull the yoke again, then there's no way to not be touched by Clarke's reaction after his win over John Maguire.

Clarke told Ariel Helwani after his last loss, everything that could've gone wrong in his life did. His long-time girlfriend left him, he lost his place to live, he was injured and other innumerable social and professional bonds were broken or dissolving before his eyes.

And yet, by hook or by crook, Clarke stubbornly refused to quit on himself. I bet he probably doesn't even know why. Instinct is a powerful if subconscious current. Whatever the motivation, Saturday's win was a moment of triumph that had almost nothing to do with Maguire and everything about Clarke, who he sees himself as and who he knew he could be.

If that doesn't make you teary eyed, be grateful. Life hasn't ripped you to pieces yet.

Worst Representation of Himself: Tyron Woodley

None of us can know for sure, but I am confident there's more to Tyron Woodley than he's shown. We know he's a sensational athlete, he's proven he can wrestle, he's knocked out tough competition and gone the distance with other dangerous fighters. He's ready for the next step in his career and all the potential glory and riches it brings.

What I am not sure of is whether Woodley is capable of bringing his talents to bear. That's not an obvious thing or simple decision. That's a remolding of how Woodley approaches competition, risk, preparation and execution. In some ways, it's a change of himself. But if he wants to do or be anything more than what he has now, he has no choice.

Even if you believe Woodley won on Saturday, it was the worst possible performance he could've turned in and still claimed to be victorious. The central point was that it wasn't a reflection of the limit of his ability in any portion of the game. In fact, there was only one limit: Woodley's inability to let his game breathe. The unfortunate part is that's the most important limit of them all.

Best Representation of Himself: Stipe Miocic

The UFC post-fight bonus system exists for two reasons. The first is that's how the organization likes to pay their fighters: on a structure of 'eat what you kill'.

The second is that it's necessary to combat what the Unified Rules incentivize. For example, they offer each competitor an immediate end to the bout via knockout, TKO or submission. One need not fight the entire 15 or 25 minutes if they can get the job done otherwise. That incentivizes excitement.

Generally speaking, however, the rules (and the nature of the business) incentivize winning, however one can get there. Jimmo later explained he couldn't afford another loss and wasn't going to put himself in a position where the risk of that happening was too great. That's a space he's allowed to occupy specifically because of the way the rules are written as well as the UFC's business practices. I'm not faulting commissions or even the UFC. Both are mostly doing everything they can to keep things safe, fair and entertaining. But it is worth reminding ourselves in situations like these that our game is going to produce as many snoozers as it does electrifying moments. Some fighters want more. Others just want to win. Our business and rules set accommodate them both.