The MMA world never sleeps, and even as the break between major events continues, Monday was no exception.

We have plenty on tap today, from some frightening behind-the-scenes footage to Chael Sonnen's latest salvo against Wanderlei Silva. Even Jose Canseco makes a cameo for the second day in a row, so you know things are about to get weird. So let's stop wasting daylight and get to it with some headlines.

Sonnen takes aim at Silva. Chael Sonnen took to Twitter to explain why a fight between he and Wanderlei Silva makes sense. His two reasons? "1.) I want an easy fight. 2.) Wanderlei is broke."

Alvarez continues crusade against Viacom. Former Bellator lightweight champion Eddie Alvarez accused Viacom lawyers of altering language in a key part of his contract, switching Bellator's matching obligations from "all terms" to "all material terms." Said Alvarez: "You can't change the contract in the middle of the contract. If you're playing unfair, you're playing unfair. I'm trying to play by the rules. They're lying to the judge, they're changing the contract, I can't play that game. They're not leaving me any choice. If they're going to kick me in the balls, eventually I'm going to kick them in the balls back."

Silva fined. UFC middleweight champion Anderson Silva was fined $50,000 by Zuffa after skipping a Los Angeles media tour to hype UFC 162, according to a report from USA Today.

UFC roster cuts. Zuffa officials cut featherweights Pablo Garza and Antonio Carvalho from the UFC roster following recent first-round losses. Garza racked up a 3-3 record inside the UFC, but exits a loser of three of his last four fights. While Carvalho dropped to 2-2 after a controversial stoppage against Darren Elkins at UFC 158.

We get so wrapped up in huge knockouts that we sometimes forget the frightening consequences of such violence.

It was only a matter of time before a Nick Diaz version of these behind the scenes 'Jerry Rips' videos came out. And oh yes, this one delivered.

Hey guys, Gina Carano made her return to MMA. (Na, not really. But at least she threw up an armbar on Michelle Rodriguez.)

Props to @jeremymellinger for the find.

Let's head out to Switzerland, where somebody has obviously been studying up on their Rampage Jackson notes.

Props to @mmalovepodcast for the find.

For those looking for more information on Bellator MMA's 32-man Fight Master cast:

So, yeah. Russian promos are the best promos.

ANNOUNCEMENT:Thank you @danawhite and Joe Silva and the entire @ufc for these amazing years.Read my statement here: facebook.com/TheScarecrowMM…

Thanks everyone for all the supporting comments. I've always said I have the best fans!!!!!

I have been cut by the UFC. Too many FW's on roster & need to cut back. Business is that way. Only love for the UFC. Hopefully be back. Thx!

@akiracorassani Contract looks Iron clad!! I've Boston opp but contracts have not yet been signed, campaign away for it my friend, I AM GAME

@badboygarcia You come to fight Leonard, although you are on a bad run, I'd be happy to fight you, campaign away, the Q is starting to grow!

I'd no excuse 2 wear a suit before I signed with the @ufc, now I'm never out of them,4 different suits 2day alone. Can't beat that feeling!!

Going to 185 with pizza haha twitter.com/mousasi_mma/st…

@josecanseco ill beat your ass rat boy the whole worldsaw u run from hung man Choy. Set it up ill break your jaw#snitchesgetstitches

hey bigness @shaq this is 4th time I have said yes since you first challenged in 2011 .how long till u back up your smack mouth #whysoafraid

left message for Mark an Perry @prpartnerslv ur management @shaq. have them return call this time .how much time u need to get under 4 bills

Lookwhat I found , it's rAt. its a species called @josecanseco but there harmless. All they do is run at da mouth twitter.com/SHAQ/status/33…

Today's Fanpost of the Day is a change of pace, courtesy of domenico.neziti: Some MMA art in the meantime...

While we're waiting for UFC of FX 8, I'll post a few quick sketches I did here and there. First an Anderson Silva quickie I did last year and a few warm-up sketches I did between other jobs.

As you see the A. Silva is a bit different than the usual style I use for the sketch cards, but I like to use various styles depending on the work I have to do. In any case it certainly is in tune with our hosting site :)

In this scene we can see Anderson Silva's amazing reverse elbow Knockout over Tony Fryklund in 2006 (yeah I know, the elbow didn't bloody Fryklund, but that's for the drama).

The other is just a study for and intricate armlock crossing I was trying to understand and that's it.

The last, well just an overhand left by some anonymous middleweight with an almost Hominick sized hematoma on his forehead.

Hope you enjoy these in betweeners and as always comments are appreciated :) 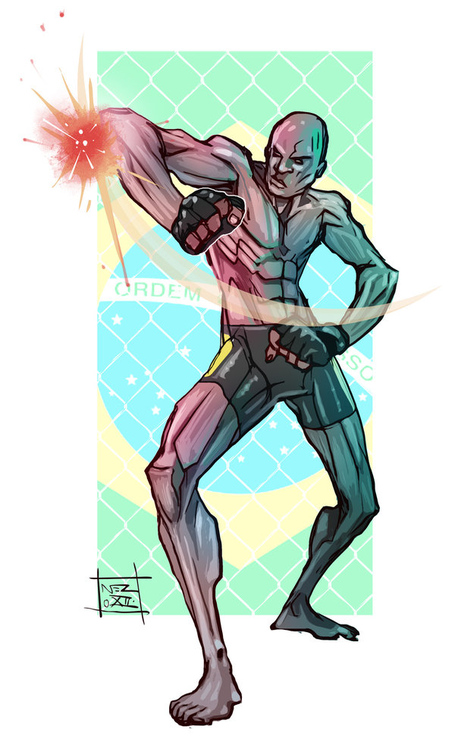 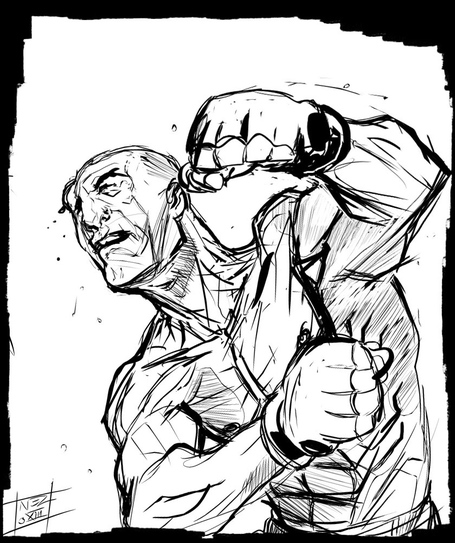