Former Strikeforce fighters have made their mark in the UFC across the board. But, with the exception of the women's bantamweight division, at no weight class has their impact been felt than at lightweight.

This became clear after a pair of April fight cards, where the efforts of three 155-pounders had a seismic effect on the rankings.

Gilbert Melendez, the longtime Strikeforce champion, actually went up in the rankings after his razor-thin loss to lightweight champion Benson Henderson in the evening's main event. Melendez made his detractors look foolish in nearly taking the crown from "Smooth" in a fight which many believe he should have gotten the nod. Melendez, who went into his title shot ranked No. 3 by SBNation, came out a unanimous choice for No. 2.

Josh Thomson, meanwhile, did what no UFC fighter in two separate weight classes, including Henderson, could do over the past seven years: Finish Nate Diaz. It was an eye-opening performance for the fighter who also handed Melendez the only loss of the latter's Strikeforce tenure. Thomson enters the poll at No. 4.

Finally, Pat Healy proved patience is a virtue. That's true both in his career, as he waited seven years to return to the UFC after a one-and-done in 2006; and in the return bout itself. The Team Quest fighter lost the opening round of his UFC 159 fight with Jim Miller, then rallied, as he slowly wore Miller down before finishing him near the end of the final round. That marked the previously unheralded Healy's seventh straight win and propels him into the top 10 at No. 6.

Of note, all three fighters are ranked ahead of a a combatant who is one win away from a title shot. T.J. Grant, who was unranked when we last did the rankings in December and is now No. 7, meets Gray Maynard at UFC 160 with the next shot at Henderson going to the victor. Maynard, who is unbeaten against anyone not named Frankie Edgar, was a unanimous pick for No. 3.

(Scoring: Fighters are given 10 points for a first-place vote, nine points for second, etc., down to one point for 10th place. The results are then tallied up and presented here. Official SB Nation rankings policy: Fighters under commission suspension are ineligible to be ranked during the duration of their suspension or if they have licensing issues. At the moment, Anthony Pettis is ineligible at lightweight due to the fact he is scheduled to fight at featherweight next). 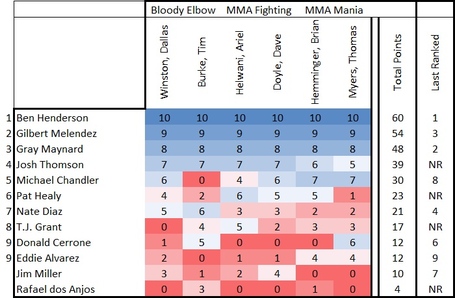 1. Ben Henderson (19-2, 60 points): Tied B.J. Penn for most successful lightweight title defense with three, though Henderson acknowledged all Penn's wins were by finish and all of his were via decision.

2. Gilbert Melendez (21-3, 54 points): Melendez has never been finished in his career. He avenged both of his previous losses prior to Henderson: to Thomson and Mistuhiro Ishida.

3. Gray Maynard (11-1-1, 1 no-contest, 48 points): By the time Maynard gets into the cage with Grant, he'll be nearly a year removed from his last bout. That his split decision over Clay Guida last June 22.

5. Michael Chandler (11-0, 30 points): The Bellator champ is building a solid case for the best pound-for-pound fighter outside the UFC.

6. Pat Healy (30-16, 23): Remember that Strikeforce bout with Melendez we were supposed to see last September? I don't know about you, but I wouldn't mind seeing it after all.

7. Nate Diaz (16-9): The Stockton brawler has some career decisions to make after resounding back-to-back losses to Henderson and Thomson.

9. Donald Cerrone (19-5, 1 no-contest, 12 points): While Cerrone is gritty, his track record has demonstrated he loses to the top of the class and wipes the mat with the rest of the pack.