Like the Celtics and Lakers in the NBA during the 1980s, the UFC's heavyweight division features Cain Velasquez, Junior dos Santos, and everyone else.

Sure, eventually someone else will rise up from the woodwork, just like the Detroit Pistons broke through in the late '80s. But for the foreseeable feature, the 265-pound realm is The Cain and Junior Show.

If that wasn't already apparent, it became obvious after UFC 160. Velasquez smoked Antonio Silva in a rematch to make his first successful heavyweight title defense. Dos Santos demonstrated he shook off the effects of his December loss to Velasquez with a memorable knockout victory over Mark Hunt.

This sets up the inevitable trilogy bout between Velasquez and Dos Santos, who were unanimous No. 1 and 2 picks, respectively, in this month's SB Nation heavyweight rankings. But who knows? By the time all is said and done, it may take a quintet of fights to figure out who's the better fighter.

Meanwhile, the rest of the pack is chasing after the bronze medal. As of now, that honor goes to Daniel Cormier, a unanimous third-place vote after his decision win over former champion Frank Mir. How long he'll stay there is anyone's guess. He recently said he'd like to fight the winner of the upcoming Fabricio Werdum-Antonio Rodrigo Nogueira fight, but a trip down to 205 eventually seems in the cards.

Speaking of Werdum, he's a unanimous pick for fourth place. Werdum meets "Big Nog," who is ranked No. 10, on June 8 in the only battle of top 10 fighters on the upcoming docket.

The fifth-through-seventh-place finishes, Silva, Alistair Overeem, and Frank Mir, each were named on all six ballots.

(Official SB Nation rankings policy: Fighters under commission or company suspension are ineligible to be ranked during the duration of their suspension or if they have licensing issues. At the moment, this does not currently affect any fighters generally considered to be Top-10 caliber). 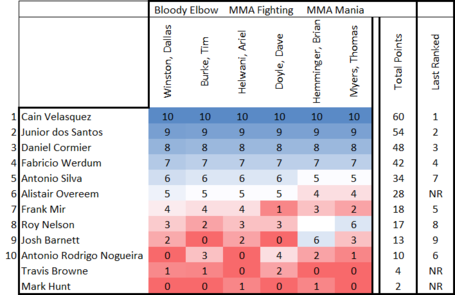 1. Cain Velasquez (12-1, 60 points): Velasquez's finish of "Bigfoot" was the eighth of his UFC career, which moved him ahead of JDS and Andrei Arlovski for most TKO/KO wins at heavyweight.

2. Junior Dos Santos (16-2, 54 points): Not much left to add that hasn't already been said about his UFC 160 performance, other than he was likely robbed of KO of the Night thanks to Mike Tyson.

3. Daniel Cormier (12-0, 48 points): Playing the waiting game on his next opponent. There are plenty of cards in August and September still in need of a big-name headliner.

4. Fabricio Werdum (16-5-1, 42 points): A win over Antonio Rodrigo Nogueira would be three in a row and six in seven fights since his famous knockout loss to dos Santos in 2008.

5. Antonio Silva (18-5, 34 points): It seems unfair to call someone with wins over Fedor Emelianenko and Alistair Overeem a "gatekeeper," but Silva doesn't have options besides heavyweight and he's not getting another title shot any time soon.

6. Alistair Overeem (36-12-3, 1 no-contest, 28 points): After a UFC stint marred by a steroid bust and fight fallouts, Overeem desperately needs a win over Travis Browne in August in order to stay relevant.

7. Frank Mir (16-7, 18 points): Mir has looked like a fighter in the process of dropping off a career cliff in his past two fights. His UFC 164 bout with Josh Barnett could be exactly what he needs.

8. Roy Nelson (19-7, 17 points): Nelson chose the "stay busy" route in accepting a short-notice fight at UFC 161 with Stipe Miocic. Given how many of the guys ahead of him either just fought or will soon fight, it's a pretty smart move.

9. Josh Barnett (32-6, 13 points): As of this writing, Barnett is roughly 4,100 days removed from his last UFC win. Mark Coleman holds the record for longest stretch between UFC victories at 4,537 days. So if Barnett defeats Mir on Aug. 31, Coleman's record is safe.

10. Antonio Rodrigo Nogueira (34-7-1-1, 10 points): Was fed a couple relatively easy fights on his home turf after his loss to Mir, but steps back up in competition to meet Werdum on June 8.