Morning Report: Dana White says B.J. Penn is 'too tough for his own good,' urges him to retire

Sometimes there's those rare days when the news cycle stands still and the MMA world slows to a halt. And yes, yesterday was one of those days.

So instead of babbling on about nothing, let's take a quick look at a subject we only touched on briefly yesterday.

B.J. Penn is 34 years old, a former two-division UFC champion, and a surefire Hall of Famer. Yet Penn holds only one win in his past six fights, and his past two losses have been disturbingly brutal, so really, it was only a matter of time.

White made his feelings known about Penn less than an hour after another of the UFC's old mainstays, Forrest Griffin, announced his retirement from mixed martial arts.

Griffin's exit was a bit surprising, but the TUF 1 winner carried with him 12 hard years of injuries, wars, and overall punishment, and had been knocked out five different times over the course of his career, the last few of which were quite violent.

Penn, on the other hand, has yet to be truly knocked out once over the course of his 12-year career. Though according to White, that might not necessarily be a good thing.

"B.J. is too tough for his own good," White explained. "B.J. might not be knocked out, but the shots B.J. took would've knocked out a normal human being. He's had his head bounced off the canvas like a basketball by Matt Hughes, by Georges St-Pierre and then Rory (MacDonald) just did it to him. B.J. Penn has left that octagon looking like a f--king alien. He's too tough for his own good.

"You don't knock out B.J. Penn. B.J. Penn absorbs every amount of punishment you can give him. Doesn't mean he hasn't taken damage. He's taken a lot of damage, and I don't want to see him take anymore."

Penn already retired once, so this talk is far from outlandish. White made it clear the decision to hang up his gloves a second time will be Penn's alone to make, but it's obvious at this point which way the UFC prefers to see this go.

And with that, let's get to some headlines.

Souza vs. Okami update. After UFC President Dana White told reporters that a bout between Yushin Okami and former Strikeforce middleweight champion Ronaldo "Jacare" Souza "will happen," Souza accepted the match-up via his manager, adding that he'd like the fight to take place in four months.

Henderson talks Grant, decisions. UFC lightweight champion Benson Henderson is as sick of fighting in close decisions as you are of watching them. But unfortunately, opponents may be content to continue challenging him with a Frankie Edgar-style gameplan.

Go behind-the-scenes at UFC 160 with the latest edition of Backstage Pass. (Click to watch.) 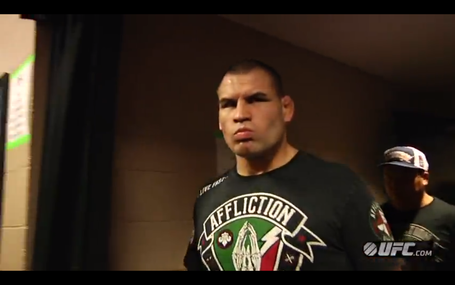 Speaking of Georges St-Pierre, you probably should check out this latest fan-made trailer:

Props to @DurenDiddy for the find.

So how do we know this guy wasn't really Nick or Nate in disguise? The people want answers!

Rarely does the whole 'stick your chin out and act like Nick Diaz' thing work on the regional scene, but when it does -- instant gold. (For the lazy, jump to 1:58.)

Let's exit with one more gem from the regional scene, just because.

BACK IN THE STATES

Never say no to a Russian when it's time to eat

This has officially been a trip of a lifetime, getting the royal treatment

Definitely packed on about 5 pounds since I've been here twitter.com/JonnyBones/sta…

ONE OF THESE GUYS IS A LHW

TIES ARE FOR SUCKERS

Watching a bunch of @ufc stuff on Fuel on the plane & I have 1 q: Is everyone too cool to wear a tie? Seriously, not one anyone UFC related.

Hey #Birds easy with the whole "shitting on the car thing". We know where you nest & you don't wanna go crap for crap with any human. 😡

All you sissy's with hair BOW down :) and Happy Memorial Day everyone!!!! twitter.com/danawhite/stat…

Today's Fanpost of the Day comes to us from IM THE FUKKEN RAKEMAN, who writes: Pot-shotting with Mike Pyle

Let's go back to the night of August 6, 2011. In the city of brotherly love, Rashad had just annihilated short-notice replacement Tito Ortiz. Vitor Belfort unleashed multiple fists of christ to Sexyama. Putting him in a beautiful slumber.

Yoshihiro Akiyama, where are you!?

- The focus of my fascination, Mike Pyle's next fight was in Brazil against Ricardo Funch. He went into that fight with 2 knockouts, the last one occuring in 2006. The majority of BE writers chose Pyle by decision with only Brookhouse and Thapa predicting T(KO) victories, which I must say I am very surprised was even predicted.

- This was the beginning of Pyle "pot-shotting", which I describe basically as throwing one strike at a time.

- In this gif, you see Pyle hit Funch with the right straight, a glancing body kick and apply the Muay Thai plum, connecting with a knee.

- Pyle surprises again with a comeback KO of Josh Neer. I can't really put into words his striking style. It's sort of a precision striking, but at the same time it isn't. And Pyle's opponents just don't see his strikes coming. GIF

- And yet again Pyle pulls a KO out of his ass with the flowing Mullet against James Head. A solid, solid all around fighter. Mike Pyle, the most unexpected person to have 3 straight KO's, two utilizing the Muay Thai Plum. It looks like Pyle isn't even hitting his opponents that hard, but is getting in that "light switch" area. Think Chuck Liddel/Rich Franklin. GIF

- And then finally Rick Story. Pyle came close to finishing Story in round 3 with again pot-shots. Picking his spots throwing almost exclusively 1 strike at a time.

As you can see, I'm no writer or striking analysis guy like the immortal Jack Slack and infamous Motmatremoitremere. Just something I noticed, and found, really strange about Mike Pyle's last 4 fights.

My conclusion, Mike Pyle's use of the mullet, long punches, having a whole career where he never did this kind of striking (similar to Vitor rarely kicking for a long time). The older, veterans are surprising opponents with moves that are in most fighters skillsets by adding it too their "old game".

Needless to say, I will be watching Pyle's next fight very closely. And how about that Helicopter Armbar attempt. DAMN!