There was much to love about Saturday night's UFC 160. From T.J. Grant's spectacular upset to the spinning wheel kick by Junior dos Santos, fans had a lot to cheer about.

There was also, regrettably, much to be upset about. From questionable judging decisions to a terrible blowout of a main event, not all was fun and games at the MGM Grand in Las Vegas, Nevada on Saturday evening.

I don't think this is the best UFC card of the year, but it might be the best UFC pay-per-view. Top to bottom, this card was bloody, violent, technical, exciting, offered high stakes and resulted in outcomes that favor future UFC matchmaking needs (not in total, but the Velasquez-dos Santos trilogy is the big win). The main event was not great and the expected blowout everyone anticipated. There were also a couple of questionable decisions and referee calls (which event doesn't have this problem?). I'm not suggesting the card was perfect. But in totality, no UFC pay-per-view had the consistent level of quality or favorable outcomes, fight-over-fight.

This was a well-produced card. All the UFC needed was a little bit of luck for the entire operation to truly shine. They don't always get it, but on Saturday night they did. What resulted was ultimately an excellent event. 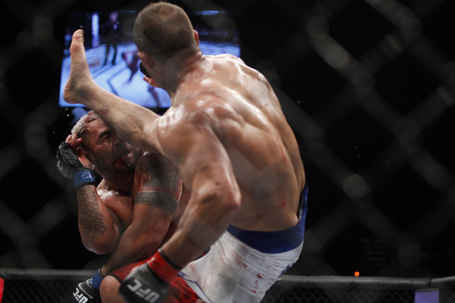 What more really needs to be said here? Be sure to check out all of Saturday night's photos from Esther Lin.

There were a lot of standout performances on Saturday. Cain Velasquez could get the nod as the best given how easily he dispatched Bigfoot. I suppose T.J. Grant's dispatching of Gray Maynard was nothing short of remarkable. But in terms of demonstrating a mastery of a particular kind of craft, no one tops Khabib Nurmagomedov's thrashing of Abel Trujillo.

What we saw from Nurmagomedov wasn't just a 'superior' skill set, although we did see that, too. The key insight here is that Nurmagomedov was vastly more technical in every phase of every grappling exchange. From guard, he could capture an elbow for a submission, sweep or back take within seconds. From the tight waist behind Trujillo, he could maintain control for takedowns and mat returns whenever he wanted. If Nurmagomedov wanted to shoot from the outside of take Trujillo down from the clinch or along the fence, he could. He could do almost whatever he wanted, whenever he wanted.

It was a master class in grappling. Rarely do we get to see a grappler put through so many positions, transitions and phases in a single bout. Even rarer still is the ability of a grappler to demonstrate high-level fluency with every iteration or change. I don't know how far Nurmagomedov can go in the UFC's lightweight division, but in terms of mat work, there may be no one better in the entire weight class than the combat sambo champion from Daegestan.

Rick Story is a UFC welterweight with wins over Thiago Alves, Johny Hendricks and (from several years ago) Jake Ellenberger. Today he's 2-4 in his last 6 fights. His only recent wins have come over Quinn Mulhern and Brock Jardine.

At his best, Story is a fearless pocket puncher and strong offensive wrestler who competes with an indefatigable will. At his worst, he is reckless with position, over extends himself and lets his desire to press the action turn his bouts into bullfights where his opposition are the matadors.

On Saturday, we saw each Rick Story. The problem is the latter one was the Story more on display. It's also the one who has more recently dominated his career. If he is to be more than he has been or even hang onto his UFC career, that dynamic needs to shift. Quickly.

I don't know how else to say it: the weight cut from welterweight to lightweight seems to have brought Grant's entire offense to life. Maybe it's not just the cut. Maybe Grant's cut is working in tandem with his skill-building efforts. I don't know what it is specifically (it's not simply that he's 'bigger'), but it's working. Frankly, it's hard to think of a fighter who has benefited more from weight cut in MMA than Grant. Everything seems to be working for him, although historically his takedown defense has been an issue.

Can he defeat Ben Henderson to take the lightweight title? I don't know. I don't feel like he could. Then again, I've been wrong about Grant over and over again. So have the majority of my MMA media brethren. So have most fans. Grant is doing the impossible and making it look easy. Almost no one saw any of this coming, but we're all pretty glad we got to see it happen.

It's not a good call under any measurement, but the second round of their bout - the one in question - was a close affair. Look at the stats to see what I'm talking about. The issue here is one, however, the stats don't do a particularly good job of telling. That is, once on the ground, what did Bermudez do with his time? Did he hold Holloway there long enough? Did he land the majority of his strikes there? It's a dominant position with the pass: was he able to operate as such? Is what he did on the ground and with the takedown itself more offensively significant than the striking disparity Holloway enjoyed? I believed that it was, yes, but because there's no clear guideline for settling these questions, we are left with calls that arguably wrong but ultimately 'defensible'.

Is there a retired yet relatively public combat athlete more beloved by other combat athletes than Mike Tyson? Muhammad Ali receives more praise from a wider swathe of society, but his physical condition makes glad-handing with fans a challenge. And besides, we're talking about fighters and their favorite fighter. Their calculus of what's great or inspiring, I suspect, is slightly different and probably darker than the typical citizen's.

Tyson's personal reformation from feared felon and ferocious boxer to mellowed-out father has made him accessible. It's probably fair to say there's no athlete more honest in press interviews than Tyson at this point. But for a fighter who grew up as a child when Tyson ruled the boxing world, the psychological imprint is indelible. The man once represented hyper-masculinity and merciless aggression, hypnotizing audiences with his ability to wreak havoc. That's a hard thing to forget, particularly when this was on display in the formative years of a generation of young men.

It's therefore amusing to watch grown men who fight for sport giddily grin just for the chance to put their arm around a figure they've always modeled themselves after as an athlete or competitor. It's oddly humanizing, both for Tyson and the fighters he inspired to have their mutual admiration put on public display. In any case, I can't think of another person who could elicit similar reactions from so many of today's fighters while still being in decent health themselves. I also believe as far as ringside celebrities go, Tyson is still orders of magnitude above Waka Flocka Flame.