What to do about Vitor Belfort?

The former UFC light heavyweight champion knocked out former Strikeforce middleweight champ Luke Rockhold in the main event of UFC on FX 8 on May 18.

That made it four straight victories in scheduled middleweight fights (one, against Anthony Johnson, became a catchweight after Johnson missed weight) since Belfort lost to champion Anderson Silva via knockout at UFC 126.

Is that enough to make Belfort, whose success has been controversial due to his use of testosterone replacement therapy to go along with a prior steroid suspension, the top contender to Silva's UFC title? According to the latest SBNation poll, the answer is yes, by a whisker.

Belfort finished with 51 points in this month's poll after defeating Rockhold, whose only career win over a Top 10 middleweight was against current No. 8 Ronaldo "Jacare" Souza. Chris Weidman, who challenges Silva for the title in the main event of UFC 162 in Las Vegas on July 6, dropped a spot to No. 3 with 49.

The breakdown: Belfort had an even split of three second-place votes and three thirds. Weidman also had three seconds, to go with two thirds and one fifth-place vote, which made the difference.

This month's middleweight poll featured the same 10 fighters as the last time we ranked the 185 pounders, but the deck was shuffled a bit. Rockhold's loss dropped him a spot from six to seven, which bumped Costa Philippou up to six. And Souza is up two places to eight after his impressive UFC debut, which dropped Mark Munoz (9) and Tim Boetsch (10) down a spot apiece.

(Scoring: Fighters are given 10 points for a first-place vote, nine points for a second, etc., down to one point for 10th place. The results are then tallied up and presented here. Official SB Nation rankings policy: Fighters under commission suspension are ineligible to be ranked during the duration of their suspension or if they have licensing issues. This does not affect any middleweight fighters under consideration at the moment). 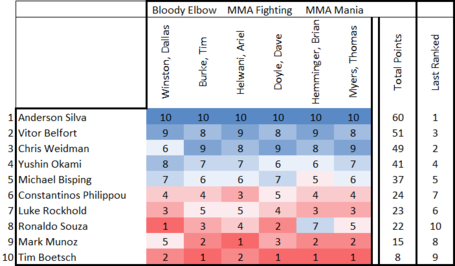 1. Anderson Silva (33-4, 60 points): Among the records Silva looks to extend when he meets Weidman at UFC 162 is his company win streak (16 straight) and most succesful title defenses (10).

2. Vitor Belfort (23-10, 51 points): Will be interesting to see what happens should Silva defeat Weidman. Will Silva be interested in a rematch with another TRT user (after also defeating Sonnen last year?) Or would this be the impetus for Silva to take another title shot with Jones.

3. Chris Weidman (9-0, 49 points): Weidman has been out of action nearly a year and suffered a shoulder injury in the interim. That's a tall order against a fighter like Silva.

4. Yushin Okami (29-7, 41 points): Winner of three straight fights since his consecutive losses to Silva and Tim Boetsch, Okami has called out Michael Bisping.

5. Michael Bisping (24-5, 37 points): His victory over Alan Belcher at UFC 159 put Bisping back in familiar position: A high ranking in the division, but just out of the reach of the title picture.

6. Costa Phillippou (12-2, 1 NC, 24 points): No word on a next fight for Phillippou, who is on a five-fight win streak, but had to pull out of his planned fight with "Jacare" due to an eye injury.

8. Ronaldo Souza (18-3, 1 NC, 22 points): Former Strikeforce champion "Jacare" made a swift impression in his UFC debut by earning Submission of the Night honors against Chris Camozzi.

9. Mark Munoz (12-3, 15 points): A year ago, it would have been hard to imagine that a Munoz-Boetsch fight would be one to determine who stay relevant at middleweight. But that's the case when they square off at UFC 162 in Munoz's first fight in a year.

10. Tim Boetsch (15-6, 8 points): Has slowly slid down rankings since his loss to Costa Phillipou. A loss to Munoz would make Boetsch's four-fight win streak a distant memory.