Jon Jones wants to fight Alexander Gustafsson next. Dana White promised the next title shot to Lyoto Machida. Gustafsson says he'll fight either Jones or Machida. Sounds like the potential for the sort of unique soap opera only mixed martial arts can provide.

But Jones' gruesome compound fracture of his left big toe, suffered in the process of dishing out a beating to Chael Sonnen at UFC 159, seems to make it all pretty simple. Machida, who must be feeling like Charlie Brown with the football at this point after all the title shots that have been promised and not delivered, should meet Gustafsson while Jones heals, with the winner emerging as the fighter who will try to keep Jones from successfully defending his UFC light heavyweight title a record sixth time.

That's how the SB Nation rankings poll sees it, too. Machida, the former UFC champion, and Gustafsson, who has won six consecutive fights, claimed all the second and third place votes behind Jones in the new light heavyweight top 10. Machida claimed five second-places votes and a third; Gustafsson five thirds and a second.

If Machida vs. Gustafsson is made, it won't be the only light heavyweight, top-five fight of note. Numbers 4 and 5 are scheduled to square of at UFC 161 in Winnipeg, as Dan Henderson and Rashad Evans both look to shake off losses in their most recent fight.

After that, there's nearly unanimous agreement on who else should be considered a top-10 LHW: Glover Teixeira, Phil Davis, Mauricio "Shogun" Rua and Antonio Rogerio Nogueira, the next four in the list underneath Evans, each appeared on all six ballots. 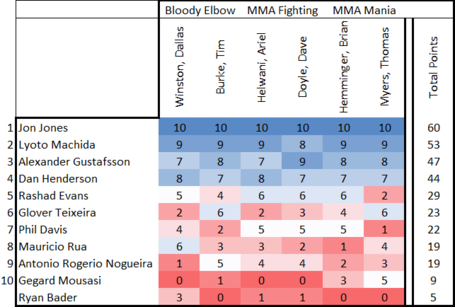 2. Lyoto Machida (19-3, 53 points) -- You have to imagine at this point that accepting the Gustafsson fight and staying active is better than waiting for a title shot which might not come, especially considering he's looking to the momentum of winning three out of his past four fights.

3. Alexander Gustafsson (15-1, 47 points) -- Gustafsson somehow managed to come out of missing his hometown main event fight in a stronger position than he probably would have if he fought, considering that even if he won, he would have likely need time off afterwards.

4. Dan Henderson (29-9, 44 points) -- How much of Henderson's tight split decision loss to Machida was simply a matter of Machida playing a game, and how much was the natural result of a 42-year-old coming off a knee injury? Henderson's fight with Evans should give us a better idea.

5. Rashad Evans (17-3-1, 29 points) -- Coming off his listless loss to Antonio Rogerio Nogueira, Evans will carry the weight of the entire Blackzilians camp, which is need of a marquee win, into his bout with Henderson.

6. Glover Teixeira (19-2, 23 points) -- A UFC 160 fight against James Te Huna trains the spotlight on spot the Teixeira finds himself in: The guys ahead of him are all accounted for, and most of those below him won't help him increase his profile.

7. Phil Davis (11-1, 1 NC, 22 points) -- Granted, Vinny Magalhaes provided a willing stationary target, but the accuracy and crispness of Davis' striking in his UFC 159 win was a revelation. Davis was pushed into main events a bit too soon, but he looks like he's ready for another run.

8t. Mauricio 'Shogun' Rua (21-7, 19 points) -- Does "Shogun" have anything left in the tank? Reputation alone won't get him past Antonio Rogerio Nogeuira, who makes a habit out of winning fights in which he's counted out.

8t. Antonio Rogerio Nogueira (21-5, 19 points) -- Looks to capitalize on his biggest UFC victory (over Evans) and win both his third in a row and third straight over a former UFC champion when he meets "Shogun."

10. Gegard Mousasi (34-3-2, 9 points) -- So much can change between now and the time he returns from knee surgery -- including which division he'll compete in going forward -- that it's pointless to speculate.