Morning Report: Nate Diaz to either be 'fined, suspended, or cut' for homophobic slur, manager responds

It continues to confuse me when professional athletes fail to recognize the weight their words carry on social media. You already know what happened by now. Thursday morning, UFC lightweight Nate Diaz popped open his Twitter account and fired off a pair of tweets in defense of Pat Healy, who, as silly as sounds, recently lost a very large sum of money because he smoked marijuana.

Now that's all well and good. Diaz is more than welcome to express his opinion; in fact it's often encouraged. Where he made his mistake, though, is the homophobic slur Diaz haphazardly included in his tweets, which were assumedly directed towards the recipient of Healy's money, Bryan Caraway.

Obviously it was a poor choice of words. Offensive slurs of that magnitude aren't tolerated in any professional sports league. Athletes are public figures both on and off the playing field, and always represent the employers who pay them larger salaries than most of the world will ever dream of earning. It's the downside of the money, prestige and fame. The New England Patriots wouldn't tolerate it if Tom Brady tweeted that to Peyton Manning, the Chicago Bulls wouldn't tolerate that if Derrick Rose tweeted that to LeBron James, and it definitely won't be tolerated in this new era of the UFC, in which inroads to the mainstream and legalization of MMA in New York are top priorities for Dana White and Lorenzo Fertitta. This isn't wild, wild west anymore.

So, not surprisingly, it didn't take long for White to respond.

"We are going to fine, suspend or cut him," White told MMAFighting.com's Dave Meltzer. "One or two of those three will happen."

White was in Germany when the news dropped on Thursday, but is expected to make his decision regarding Diaz's fate Friday morning after he arrives in the United States.

As of this writing Diaz's tweets remain posted on his Twitter account, apparently on the advice of his manager, Mike Kogan, who also urged his followers to look up the slur on Urban Dictionary.

"Guess what? The word f----t, at least in Northern California, and where Nate is from, means b---h," Kogan said to MMAJunkie.com. "It means you're a little punk. It has nothing to do with homosexuals at all. So when Nate made the comment that he made, he didn't make it in reference to homosexuals or calling Caraway a homosexual. He just said it was a b---h move.

"How people take it is beyond my control. But that's what my intent was. And it was a b---h move, for the record. Pat Healy? It's not like Pat Healy is Georges St-Pierre and he could afford it. That was probably the most money he's ever made in his life. And because of something he did, I'm pretty sure way before the fight ... it's not like he walked out into the cage with f--king weed in his mouth, he got fined. He doesn't need somebody else dwelling over it."

Healy's drug test. Pat Healy lost nearly 80% of his fight earnings, just because he smoked marijuana during his training camp. MMAFighting.com's Mike Chiappetta argues that in this case, the punishment doesn't fit the crime.

Diaz uses gay slur. In a misguided attempt to defend Pat Healy, Stockton's favorite son, Nate Diaz, hurled a homophobic slur at the "guy who took the money" on Twitter. UFC President Dana White quickly responded, telling MMAFighting.com's Dave Meltzer, "We are going to fine, suspend or cut him. One or two of those three will happen." White is expected to decide Diaz's fate sometime Friday morning.

Vera vs. Rothwell. UFC veteran Brandon Vera returns to heavyweight for the first time in five years to take on "Big" Ben Rothwell at UFC 164. Vera announced the bout Thursday morning via Twitter.

UFC on FX 8 preview. Get ready for Saturday's UFC on FX 8 showdown with previews and predictions of the 13-fight card.

Florida gon' crazy. Let's talk about something fun, for a change. Two rival Florida mayors, Hialeah's Carlos Hernandez and Miami Lakes' Michael Pizzi, have agreed to settle their political differences in the cage with a charity amateur MMA match. For real.

For a guy that doesn't like fighting fellow Brazilians, Anderson Silva has sure embarrassed quite a few of them.

A clip from Joe Rogan's new stand up. This is totally NSFW, just an FYI. (Also, "Josh" is referring to Josh Barnett, who was in the crowd that night.)

I wonder how much that 118-pound weight advantage is going to help Scott Ferrozzo against a 19-year-old Vitor Belfort? Seriously folks, if you've never seen this fight, click below and behold the hilarity. 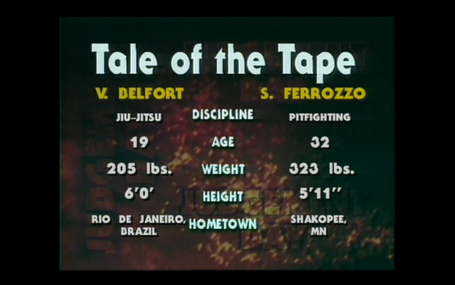 As someone who lives in Arizona, the sentence, "Unfortunately, I live in Arizona," is probably the most accurate sentence I've ever heard.

Shinya Aoki absolutely worked Kotetsu Boku last month to add the ONE FC lightweight belt to his mantle. Now he'll show you how he did it.

NOT A GOOD CHOICE OF WORDS

I feel bad for pat Healy that they took a innocent mans money and I think the guy who took the money is the biggest Fag in the world ..

THESE GUYS GET IT

Language is powerful peeps. Consider that before you hit that "tweet" button.

SO DO THESE GUYS

I never smoked, I'm not against those people that do, but how can you allow people to do TRT and not smoke weed before a fight?

Don't know why #mma fighters aren't allowed to smoke weed before fights. If judges can do it then the fighters should be able to as well. 😁

I feel I deserved the SOTN anyways for my sub. And fighting on 5 days notice cutting 23.5 pounds and making weight and winning!

Press conference today. Can't stand fist to face bullshit, he will get his, I promise! instagram.com/p/ZYnlUqIaD8/

Cool pic of GSP and I getting some work in @renzograciebjj twitter.com/ChrisWeidmanUF…

Today's Fanpost of the Day comes to us from our old friend Steve Borchadt, who writes: Pat Healy and the absurdity of how commissions, UFC handle marijuana test failures

Let's make one thing perfectly clear from the get go: Pat Healy has no one but himself to blame for failing his post-fight drug test for marijuana at UFC 159.

The 29 year old Healy is a twelve year veteran of the sport -- and although he may have spent the early years of his career honing his skills on cards with dubious names such as FCFF: Throwdown on the Fairground that reek of, shall we say, laissez faire regulation -- during that time he's doubtlessly learned a thing or two about how this whole drug testing business works. In fact, up until last month Healy spent the entirety of his regulated MMA career peeing as clean as the jokes in a televangelist's sermon.

Which is why he's no doubt going through his own personal regret-laden hell right now. Of all the fights to get popped with a test failure, why did it have to be this one?

Healy's victory over Jim Miller at UFC 159 was the crowning moment of his career. After years of mixed results - including a one and done UFC stint back in 2006 that ended with Healy getting choked out in the first round - here the guy had finally gotten a signature win that established him as a real player at lightweight. It wasn't a case of Healy merely eking out a decision either; he dominated a perennial top five contender in Miller and became the first to ever submit him.

Making an already great night no doubt one of the best of Healy's life, the blue collar fighter earned $152,500 for his efforts between his contracted show purse of $17,500, a $5,000 win bonus, and a whopping $130,000 in bonus money for winning both Submission of the Night and Fight of the Night.

Now, thanks to one dumb mistake, all that has made like the title to a Cheech and Chong movie and disappeared in a cloud of pungent smoke.

If Healy has the stomach to take a look at his bank statement today, it might feel like UFC 159 was just a particularly sweet daydream he was in no hurry to wake up from.

However, something tells me that even if a few weeks after the fight Jim Miller's face isn't still wearing the beating he received at Healy's hands, the scrappy New Jersey native is still going to wake up tomorrow morning feeling like he's coming off a loss. Miller and Healy may both have an unsightly purple box marked NC on their Wikipedia pages now, but everyone who saw UFC 159 knows what really happened that night.

Yet here we are having to pretend like the fight never took place. Might as well erase it from the upcoming UFC 159 DVD and replace it with Healy delivering an insincere PSA on the evils of smoking dope. After all, according to the rules set by both state commissions and the UFC, Healy's ill-advised choice to get high a month before competing somehow cancels out his performance in the fight.

And that's a big part of what makes the standard protocol in situations like this so unsatisfying. You'd have to have red tape flowing through your veins rather than blood to honestly think Healy hitting the bong and watching the Outdoor Channel after training one day had any effect on the beatdown he laid on Miller.

After all, it's not like he was caught with elevated levels of testosterone or some other performance enhancing drug. Healy's only crime was being dumb enough to risk using a banned recreational drug in the weeks before his match at UFC 159.

Maybe it's worth taking a second here to ask ourselves what purpose regulators and the UFC are trying to serve by overturning the result after a victorious fighter gets popped for weed. If the point is to scare fighters away from toking up in their spare time, then it's hopelessly misguided. We aren't exactly talking about the most risk-adverse segment of the population here after all. There are always going to be fighters who look at the case of a Healy or a Nick Diaz and say it couldn't happen to them as long as they stop smoking far enough out and use the proper masking agents.

On the other hand, if what commissions and the UFC are trying to do is punish the stoners in their midst for using a non-performance enhancing drug in their spare time, then they might just be overreacting. It seems reasonable to give fighters a uniform monetary fine for an infraction like this - say $10,000 or so - but it's simply tone deaf to the changing society we live in to treat a marijuana test failure the same as one for steroids. Why erase a fighter's hard fought victory because he was boneheaded enough to use a banned substance that didn't give him a performance advantage?

Again, there's no question Healy messed up; he made a mistake and should be expected to shoulder the full responsibly for it.

What's not quite so open and shut a case however is the whether or not fighters like Healy who test positive for pot deserve to have their wins overturned and the entirety of their bonuses taken away. Smoking marijuana may be against the Unified Rules of MMA, but can we honestly say the punishment fits the crime?