In the UFC's return to Stockholm, Sweden, and Invicta's fifth event of its existence, there was much to love and plenty to hate. As far as the UFC is concerned, losing their main event wasn't fortuitous. Their hectoring of fans who felt the card wasn't worth their time is also regrettable. Yet, plenty of fighters put on sensational performances, an Irish featherweight made an incredible UFC debut and the Swedish crowd showed up in support.

Invicta had a banner event as well. Known fighters returned with sensational performances, a new champion was crowned and a controversial figure returned to dominance.

It's time to separate the good from the bad, the winners from the losers and the signal from the noise.

I could heap all manner of performance superlatives on the featherweight from Dublin, Ireland, but I'd prefer to just underscore how he hit every note a fighter can on his way to stopping Marcus Brimage in less than two minutes. Promotionally, he built himself as much with his true personality and honest identity as he did his fight IQ. By the time he was called up to the big leagues, he performed more than ably, justifying every bit of hype and intrigue surrounding him. It's hard to imagine a scenario where that could've gone better. He still has much to prove and a long way to go before we know the true depth of his ability, but when the biggest takeaway is not just how he performed but that you can't wait to see him again, you know he's done exceedingly well.

Worst Argument Presented in Defense of Plan B: No Judgement of Cards Before They Happen

If there is one argument that merits immediate dismissal from the lips of MMA fans and the keyboards of MMA media, it's this absurd notion one cannot judge a card before it's taken place. What nonsense.

When fans complain about a card that hasn't happened yet, let's first remember they're customers. They can complain about whatever they like (it should also be noted there's a false distinction between media and fans here; most journalists are customers, too). Second, the core of the complaint is not that the fights will necessarily be bad, which is something no one knows. It's that the primary reason for purchasing the ticket (or spending time in front of the television) goes away for some when, in Saturday's case, Alexander Gustafsson is removed from the card.

This idea other fighters that fans are tepid about can put on strong performances and still curry tantamount levels of favor can be true, but generally isn't. On balance, there really is no substitute for star power and specific star attractions. That's what fans are generally paying for. It's what they expect. When they don't get it, they make value judgments one way or the other. In either case, they are well within their rights to do.

If fans are excited about and spend resources toward acquiring Plan A, Plan B is rarely going to be viewed as identically worthy or interesting. Many are going to complain about the quality trade off. This is what consumers do when there's a transactional relationship between their own money and services or goods they purchase. How is this even up for debate?

Best Photo From the Weekend: Surprise at Sarah Kaufman's Victory 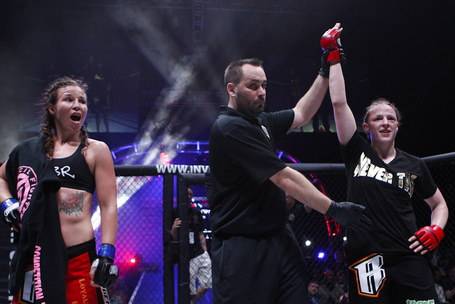 We have to acknowledge Mousasi's performance in light of the opponent change and pre-existing injury. All things being equal, it was respectably tough and reasonably technical. It wasn't particularly thrilling, but we can tip our hats to Mousasi's perseverance.

Still, if there is talent development going on before our eyes that's unheralded, it's that of Brandao. What's notable is not that Brandao never had submission skills before. He did, although he's greatly augmented his wrestling. But more than anything, his steadier training, personal maturity and sporting experience are bringing to life a skill set that was already there but never got the opportunity to shine. He's a physical beast, yes, but now he's able to methodically attack and figure out opponents. If he can continue to marry his physical tools with more thoughtful approaches to fights, look out. He can go far.

Two reasons to watch this bout. First, it's on the Internet, which makes things simple. Second, it's a good demonstration of elite MMA grappling and jockeying for positional dominance. I'd add a personal note about Waterson, whose general skill development beyond striking is positively real and should be acknowledged. Part 1 is above. Part 2 can be seen here.

Whatever one thinks of Santos and her history (present?) with performance-enhancing drugs, people care about her and they want to see her fight. And while everyone hurled invective and derision at Santos' manager Tito Ortiz (this writer included) for his advice to pass on the UFC, his strategy may have been better than he is capable of communicating. Cyborg gets the opportunity to rehabilitate herself and image by collecting scalps in Invicta. Meanwhile, Rousey appears to be in cruise control over in the UFC. Provided both women can continue their dominance, the interest in seeing them compete doesn't go away. And if/when Cyborg and UFC decide to negotiate for the fighter's services, her leverage will be far greater next time. UFC still does and will always hold the upper hand, but Cyborg can level the playing field to some extent. Well played, Mr. Ortiz. Well played.

In a culture of less is more even when it's not in terms of weight, it's a relief to see fighters decide being heavier isn't automatically some sort of nuisance to be dried out of them. Ross Pearson went 1-1 in the UFC featherweight division, hardly a downward spiral. But he hardly got a performance boost by making the drop. In fact, he was stopped with strikes for the first time in his professional career.

Pearson was favored to beat Ryan Couture, so his victory isn't necessarily out of order. But Pearson's noteworthy act isn't necessarily about Couture, although that's very respectable. It's a matter of eschewing the terribly flawed conventional wisdom in favor of common sense and understanding one's body. And he's doing so in a weight class he initially fled. To return to pick back up where he left off is a veteran move and a thoughtful career decision.