Gian Villante thought he'd at least get a few minutes to recover from Ovince St. Preux's third-round eye poke this past weekend at UFC 159. Instead, he got a matter of seconds.

Referee Kevin Mulhall controversially stopped the fight just moments after asking Villante if he was able to see, snapping Villante's three-fight win streak with the most bizarre loss of his career. Outrage was immediate, yet under the letter of the law of the Unified Rules of MMA, Mulhall was somehow in the right. And now UFC Vice President of Regulatory Affairs Marc Ratner seeks to change that.

Ratner plans to submit a formal request to the Association of Boxing Commissions (ABC), which oversees the sport of MMA in North America.

"What we want the referees to do is don't make a medical decision," Ratner told USA Today. "Call time. Don't ask the kid if he can see or not. Bring the doctor in and let the doctor make the determination.

"Now obviously, if any fighter can't see, you want the fight stopped. But here's a case (with Villante) where if you go through the mechanic and bring the doctor in, it will give them a chance to see if in fact the eye clears up and he can fight. That's what you want to do there."

In addition to amending procedure for eyepokes, Ratner also plans to request a change to the rule banning knees and kicks to the head of a "grounded opponent" at this year's ABC annual conference, which is scheduled for late July.

Though before you get all hot and bothered at the notion of Pride rules roaring back into play, I should probably clarify that Ratner is referring to abuse of the ‘three-point stance rule,' most notably seen in flyweight champ Demetrious Johnson's recent title defense against John Dodson at UFC on FOX 6.

"We really believe this 'three-point stance rule,' where a fighter is just placing his hand on and off the mat so he won't get hit, needs to be addressed," Ratner said. "That's not what the rule is for. That has to be looked at.

"I'm going to work with our attorneys on the language. If you're going against the intent of the rule, and that's what's being done with some fighters, then we've got to change it. I'm going to get the right verbiage for it. That one is one that's come into play recently in the past couple years that needs to be changed."

(Last quick note, I'd like to thank Luke Thomas for once again keeping this train chugging in my absence. It's always appreciated. Now with that said, let's get to the goods.)

Ratner to request rule changes. UFC Vice President of Regulatory Affairs Marc Ratner plans to submit multiple rule changes to the ABC at its upcoming summer conference, including amendments regarding eye poke procedure and the 'three-point stance rule,' according to a report from USA Today.

Gustafsson vs. Machida talk. Swedish light heavyweight contender Alexander Gustafsson made it clear that he'd rather fight Jon Jones next, but if the UFC wants him to fight Lyoto Machida in a No. 1 contender fight, he'd be more than willing to do it. Over the weekend, Machida challenged Gustafsson to exactly that.

Swanson: UFC gloves are 'crap.' In light of UFC 159's eyepoke extravaganza, featherweight contender Cub Swanson said this about the UFC's 4-ounce gloves: "I believe the gloves should be rounder because we hit from weird angles. If you relax your hand, the way the gloves are now, the natural position is for the hand to be completely open, which is why so many people get poked in the eye. If they were curved, and you put them on and relaxed your hand, your hand would follow the curve, not completely open. You'd only have to squeeze a little bit to make a fist with a more curved glove. It's a balance that's missing with the current gloves."

UFC roster cuts. Profiles of eight fighters have been removed from UFC.com, leading to speculation about their release. Those fighters include Philip De Fries, Chris Spang and Besam Yousef, along with TUF 17 contestants Jimmy Quinlan, Collin Hart, Kevin Casey, Gilbert Smith and Adam Cella. Quinlan confirmed his and his castmates' release on Reddit.

TUF Brazil update. According to a report from Brazilian newspaper Folha, The Ultimate Fighter Brazil will not be renewed for a third season due to struggling ratings and waning interest.

Most striking part of this UFC 159 mini-blog (besides the woman at :38 who clearly wants to put her hands all over "Showtime")? How ridiculously calm Jon Jones looked before defending his title. Composure like that ain't normal, folks.

This first-round gem took place earlier this month, but only recently did it grace the YouTube airwaves. Somewhere, Bas Rutten is smiling. (For the lazy, jump to 7:30.)

Okay, I have no idea what I just watched, but I'm convinced: Forrest Griffin and Stephan Bonnar could read a high schooler's trigonometry homework for five minutes and it'd still be entertaining.

More Forrest, only because "I gotta tell ya, there was an odd sensuality to getting choked out," may be the best closing line to a video ever.

And finally, the latest from TUF: Brazil 2, in case you missed it: 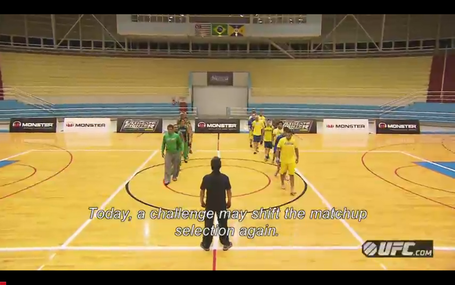 @cubswanson @nickstrickland3 @danawhite Lets do it cubby bear!! I would love to throw down!! Good luck in your next contest

@thenotoriousmma @nickstrickland3 @danawhite @dustinpoirier I like your spunk kid

@cubswanson @danawhite @dustinpoirier Wrong CUBBY!! You beat him and I beat you, DO THE MATH

@cubswanson @danawhite @dustinpoirier Well my fighting skills tell me you are 2 wide and he is 2 basic, you'd be lucky to escape the first.

Just got word fro WSOF matchmaker my fight June 14th against Lyle Beerbohm is on for sure. @mmaworldseries

Snoop D O DoubleG and I, squarin off, but then I realized if u hatin on Snoop u really just hatin on urself, hahaha twitpic.com/cmosdd

Well I may have to come out of retirement to beat @jonnybones I can't let I'm beat my record. @punishment99 #ufc159 #UFConXboxLIVE

Today's Fanpost of the Day comes to us courtesy of heavyfl0w, who keeps it real with: MMA's Worst Losses: The Bizarre, The Embarrassing, And Aliev Makhmud

One of the biggest reasons I love mixed martial arts is that your ego can be crushed at any time. Everybody eventually loses in this sport, except Philip Miller. Hell, there are really, really good fighters that have lost as many times as Charles "Krazy Horse" Bennett has been arrested.

The methods in which guys lose has always been a source of fascination for me. There are tons of knockouts that get "KO of the Night" bonuses, but alot of them are surprisingly forgotten quicker than you'd think. For example, remember how badly Pat Barry knocked out Shane Del Rosario? Can you picture the knockout in your head? It's more difficult than you'd think. And that was a BRUTAL knockout. I think Del Rosario might still be sleeping on the floor at the Hard Rock Hotel. That fight only happened 5 months ago.

It's when you start to explore the bizarre and the inexplicable that things start to become memorable. In the case of fight endings, the word "memorable" doesn't always coincide with the word "exciting", but sometimes that anticlimactic, what-the-hell-just-happened dynamic can be its own kind of memory.

(Quick rant: That Ovince St. Preux-Gian Villante stoppage was a one of a kind head scratcher. I've seen tons of MMA. Just a ridiculous amount. And I have never, ever seen a referee misinterpret someone that obviously and egregiously. It was like Mulhall had money on St. Preux. Seriously. That moment would be the equivalent to a fighter getting bludgeoned in the nuts and having the ref immediately come over and ask him "Are you in pain?" Of course he's in pain!)

Let's explore some of this weird foolishness.

Marcus Aurelio is a black belt in Brazilian jiu-jitsu, and it isn't one of those black belts that you can buy at Walmart, like the one Evangelista "Cyborg" Santos has. Marcus isn't the greatest grappler in the world or anything, but he grapples at a relatively high level, and he's been at it for a long time.

So to see him go out and get papa-beared by Shinya Aoki was startling. For those of you who don't remember this fight, Aurelio spent much of his time trapped on the bottom against Aoki, who had a body triangle around his legs. And it's not like Aoki briefly achieved this position; he had it for most of the fight. THIS MUST HAVE SUCKED SO BAD FOR MARCUS AURELIO. If I were him, I would have rather been brutally knocked out than to have my game not only nullified, but basically taken out of existence altogether. Marcus Aurelio was Shinya Aoki's grappling dummy. I don't know if Marcus is a big drinker, but I bet he poured himself a stiff one after this emasculation.

The common assumption among regular folks is that a bigger guy is categorically more likely to be able to fight than a smaller guy. If he has tattoos and a "I'm itching for you to act a fool so I can throw you out of this bar" look on his face, even better. People just look at it in terms of size. They don't take into account athleticism and coordination.

The heavyweight division is terrible. It's steadily gotten better over the years, but it's still pretty bad. You have guys losing dramatically in the first round with regularity, and when a fight does go to a decision (which is rare), you usually determine the winner by asking yourself "Which man was less close to dropping dead due to exhaustion?"

I'm still not quite sure what rendered Phil De Fries motionless in Stockholm, but it wasn't the punches of Matt Mitrione. I'm pretty sure Phil just sprinted in for a takedown attempt and KO'd himself on Mitrione's hip? Or something?

Stuff like this always makes me think "You know, I'd be far more terrified of what a guy like Brad Pickett could do to me than a guy like Phil De Fries. At least with De Fries I'd have a chance to run away, and hey, he might slip on a banana peel on the way in".

Great Caesar's ghost, was this awkward. Maynard lifted Emerson into the air and slammed him to the mat, and Emerson tapped out from an apparent injury. The problem? When Maynard's completed the takedown, his head hit the mat so hard that it instantly knocked him out. He slowly, limply rolled over onto his back, which placed him literally right below referee Steve Mazzagatti's ass. Had Mazzagatti uncorked a juicy fart at that moment, Maynard might have been stretcher bound.

This entire situation was both embarrassing and bizarre, but we were just getting warmed up at the Palms Casino. For some reason, they decide to interview Maynard about the situation. I'm reciting this from memory, but Rogan makes Maynard look at the big screen and basically says "You're out right there." Maynard responds with "No I'm not. I'm fine." Rogan, going into attack mode, fires back: "You're saying that you were okay? You were completely unconscious." Maynard, visibly upset, replies "No! I'm fine."

Something about Maynard taking the "I was fine" stance while millions of people can see that he was KO'd, as Rogan blatantly calls him on it, was excruciating. I remember thinking "I never want to see this again." And I bet Gray Maynard doesn't either.

Catch the rest of the ridiculousness after the jump...