There was much to love about UFC 159. From the sensational performance by UFC light heavyweight champion Jon Jones to the continued excellence of the women's bantamweight division, UFC delivered strongly on Saturday night. Yet, there was much to dislike. Bad eye pokes marred two bouts as did gruesome injuries and much more.

It's time to separate the winners from the losers, the best from the worst and the signal from the noise at UFC 159.

I'll get to a slightly different version of this argument a bit later, but you have to hand it to the UFC: they sold, rather effectively, a headlining bout pulled almost out of thin air. It's literally a fight that was first built in a panic and eventually crystallized into planned event. But there was nothing there: no real shot for the challenger, no true sense of rivalry, no establishment of meaningful hierarchy, no reward for challenger accomplishment, nothing. There's nothing there except a bout made for commercial and promotional success. It's not the first time they've done something like this, although it's more transparently created for financial gain than most other bouts in this tradition, e.g. Randy Couture vs. Tim Sylvia or Georges St-Pierre vs. Nick Diaz. All of this is to say, roundabout, the UFC's promotional muscle is considerable. If they can lean on the public to purchase a bout where the challenger stands no chance and is getting the bout for no reason, imagine how well they can do when the circumstances are real and the stakes important.

Dumbest Rule in MMA: No break after eye poke

A new glove may or may not solve the problem of eye pokes, but the ask to develop one is significant technical and scientific undertaking. A better solution is to change the most nonsensical requirement in the Unified Rules, namely, that fighters poked in the eye not be given time to recover.

Sympathetic referees and doctors have given fighters unofficial time to recover in the act of inspecting a poked eye. The unwritten rule is the fighter gets a minute break while commission officials look it over. By the time they get done and ask the fighter if they can continue, the fighter will say yes.

They shouldn't have to do that.

The amount of eye pokes that stop fights because of the severity of the medical injury is very low. New gloves could potentially bring the number to zero, but they're realistically years away from being deployed to market for use. And while I recognize there are bureaucratic hurdles to changing anything in any commission's rule book, the need is so obvious and the relative ease is much greater than inventing a new glove.

Favorite Photo From The Event: Terror on Cheick Kongo's face 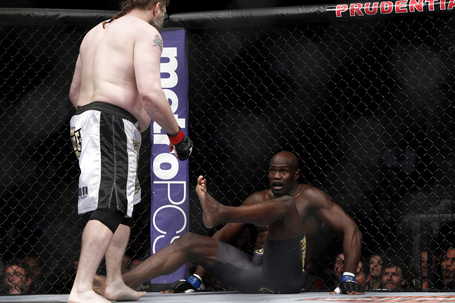 Look at the terror on Kongo's face. It's a perfectly clear shot that captures an awareness of impending doom, but one that still has a bit of proactive self preservation in it.

Boxing arguably had a better year in 2012 than MMA did, insofar as exciting main and co-main events are concerned. But, generally speaking, if there are promoters who know how to fleece their audience by selling them more sizzle than steak, boxing's storied tradition is hard to touch. That said, this main event is arguably the most cynical one in UFC history. It's sole purpose was commercial success and had - literally - nothing to do with sporting achievement. In the end, all's well that ends well. Jones looked surpassingly good and his toe should be fine. But the reality is people were asked to fork over money for an illusion and made to play detective: "What could happen? What if Sonnen takes him down? Is Jones scared of the brash talker?" All of this is the MMA equivalent of trying to decipher how many angels fit on the head of a pin. As aforementioned, credit to the UFC for effectively selling it to them, but it's a play out of the book of boxing's more notable promoters.

Surprise might be a strong word since there was a vocal minority suggesting this was Healy's fight to win. Good on them for getting it right. Still, one can't help but marvel at what he accomplished even if you saw it coming. Finishing Jim Miller is no easy task. In fact, only Nate Diaz had done it previously. When you consider Ben Henderson, Frankie Edgar and Gray Maynard couldn't, that truth becomes almost shocking.

It'd be an oversimplification to distill his story as a one of perseverance. Healy's story is that, too, but it's one of long mileage. Healy's only 29 years of age, but has traversed a winding, lonely road. He first competed in non-ideal weight class. A tenuous grip on success there in shows small and moderately big eventually forced the sacrifice to drop to lightweight. There he not only had to defeat tough opposition, but to redefine himself. His entry into lightweight was partly an effort to shed whatever impressions people had of him. That also goes for promoters in terms of winning the fights he had to get the fights he wanted.

After all of that - which includes everything that went wrong in his Strikeforce run - Healy stayed positive, locked himself in the practice room and made it count when he could. I don't know how far he can go, but I know how far he's come. If there's anyone who has earned his spot and clawed there piece by piece, it's Pat Healy.

I'm sure by the time you read this the video of the UFC.TV broadcast of UFC 159 will be pulled down. If you missed it, it's mostly just a couple of malcontent production folk hand wringing over why they don't like MMA. Their opinions seemed to have been accidentally recorded, which is regrettable since the best that can be said about them is they're primitive. I don't think the UFC can be blamed for having those people involved with the broadcast as such and I do tip my hat to the organization for trying to show their events on multiple platforms which cater to different fan experiences. Also, accidents happen. This one, though, is particularly embarrassing given the absurd nature of the commentary from the yokels in question. Either they can broadcast events across myriad platforms without these sorts of gaffes or they can't.

Also, why did Satan make a cameo with voiceover work on the pay-per-view broadcast?

I don't want to oversell this point. I even tend to think this claim that 'women always steal the show!' is almost patronizing. What I will acknowledge is, thus far, the UFC's push behind women's MMA vis-a-vis a bantamweight division is an unmitigated success. And that shouldn't necessarily be a surprise. The division and that side of the sport have a quite a long way to go before it's commensurate with the men's side of the game, but the talent is strong, the match-ups competitive, the stakes high and the outcomes enjoyable. I'd also argue it's far better to have the best women fighting in a (relatively) strong division than barely-UFC caliber TUF fighters hang onto their careers by a thread. Welcome to the big show, ladies. We're glad you're here.