There might be a new sheriff in town. And if there isn't, the debate about whether there should be is certainly here to stay.

After his easy dismantling of Chael Sonnen at UFC 159, some are wondering whether Jon Jones is the best fighter walking the planet. Their evidence is a couple of things. For starters, he was already in the conversation. Second, the ease with which he beat Sonnen far surpasses that of Anderson Silva (Jones and Silva are also of very similar size). Third, the nature of how he beat Sonnen - arguably one of MMA's most successful, functional wrestlers - indicates a strong possibility he could use those same skills and others to give Silva all sorts of problems.

Those who don't buy this argument say the resumes don't match. What Silva has done in the sport and in the middleweight division isn't matched by anyone, including Jones. Beating a middleweight at light heavyweight who hadn't competed there in almost a decade doesn't change things all of a sudden.

My take? There's a growing chorus of folks who are ready to anoint Jones the pound-for-pound world's best fighter, but not everyone. Not even the majority. I personally believe Jones would have his way with Silva, but like any other estimation about a future event, it's just conjecture. And I do respect Silva's resume, although I'd submit while the length of Silva's reign is impressive, we also have to acknowledge a reign at middleweight is not nearly as impressive as one at light heavyweight.

In any case, let the debate begin.

Pros react to UFC 159. From Jon Jones' insanely good performance to his insanely gross toe to the bizarre night in general, the pros of MMA reacted on Twitter all night to the evening's ups and downs.

Michael Bisping needs surgery. He described what needs to be done as not overly invasive, but still very necessary. And hey, anything on the neck is sensitive business.

Treatment of Jones' toe. There were a few physicians crowing about the treatment of Jon Jones on Twitter, asking why he went to the post-fight presser and more.

Cub Swanson hates MMA gloves. UFC commentator Joe Rogan has vocally wondered if there isn't a better glove out there for MMA fighters to use. Turns out he isn't alone in his opinion.

Facts from UFC 159. There are a bunch of little nuggets of info about UFC 159 you probably didn't know or hadn't thought of. Read them here.

Sonnen calls Jones and Silva 'chickens'. No, he's not angling for another fight, but he did say it's stupid the world's two best fighters aren't calling each other for a fight.

MetroPCS followed UFC commentator Mike Goldberg as he prepares to call a fight, showing how he prepares and what's involved in getting ready:

Rose Namajunas has a lot more fun going through the McDonald's drive-thru than I do:

Did you see Dana White's post-fight scrum from UFC 159? Most likely. The thing did bonkers traffic, but here it is anyway:

Joe Rogan did an excellent job interviewing Jon Jones and Chael Sonnen after the main event on Saturday night. Watch both again:

Here's a great video in the effort to save Olympic wrestling:

So, someone recorded UFC 159 that they watched through UFC.TV. In the process, they recorded what appear to be UFC staff or production people talking through the action and saying things that, well, you have to hear for yourself:

Here's an Australian TV show that purports to take a bunch of average donks, train them in MMA for a period of time and turn them into Jose Aldos (HT: Reddit):

YEAH, WE SAW. IT'S GROSS

Yep still at the hospital bone definitely broke through the skin

Got my big toe back intact :) twitter.com/JonnyBones/sta…

Screw my big toe, I'm on a mission. No time to slow down now

Ur a spoiled brat that needs 2b taught a lesson & I'm the guy2do it. Come fight me at hvywgt within 1 year or ur a coward, kid @jonnybones

Ok ok ok, I shouldn't have said coward. You're not a coward but we've got problems to solve & we fight for a living so....1+1= 2 @jonnybones

AT LEAST IT'S NOT THE EYE

I'm ok.. Just got back from e.r.8 stitches in eyelid. Disappointed. To my real supporters, I'm sorry, thank you once again.

Confession: I really don't care what Ryan Lochte would do. Like, I really honestly couldn't give a shit.

Here's a piece of work submitted by reader Kyle that was supposed to go in last week's Morning Report(s), but I forgot because I'm chronically tired: 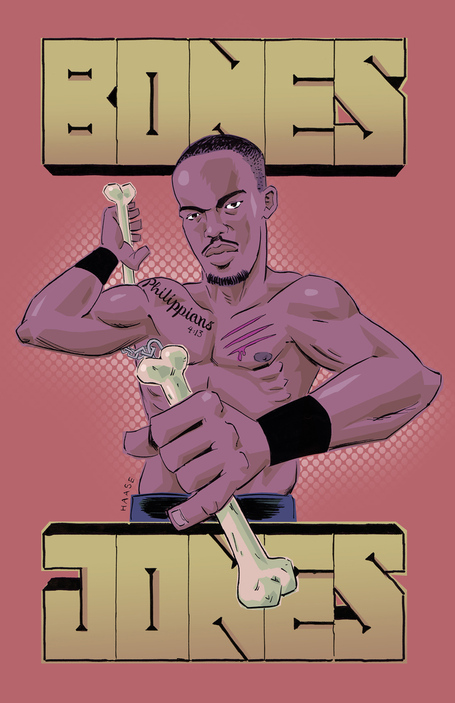 Today's FanPost of the Day is brought to you by Socrates Rising who argues the sport is suffering from fighters chasing unrealistic weight cuts;

This will give a more realistic look at what weight classes should look like. No more will you have a guy fighting at 155 who walks into the Octagon at 177 the day after weigh ins. This will keep fighters healthy. Everyone is still on the same playing field - they will be fighting at the same weights, but they will be at their more normal weights. So guys who currently fight at 185 will probably be 205'ers. 155'ers will probably be at 170 and so on. No more lackluster fights due to being worn out trying to cut weight. No more lackluster fights because you get the call 3 days before the fight and have to kill yourself to make weight. All these guys will have to figure out how to eat lean and stay lean all time or pick a higher weight class.

Think about it - how many of you wouldn't even want to get out of bed after spending all your time in the sauna and on the treadmill and having no water, not having a decent meal for days - let alone fight 24 hours later. And if you could drag your butt into the Octagon what kind of performance would you give?