Signal to Noise: UFC on FOX 7's best and worst

There was much to love about UFC on FOX 7. The card itself delivered in almost every way possible. The less than meaningful UFC vs. Strikeforce rivalry was nevertheless fun to hang onto. The San Jose crowd maybe booed a bit much, but still showed up to watch. The FOX production of UFC events continues to elevate the entire affair.

And yet, there was also enough to dislike. It would certainly be nice if a Benson Henderson bout didn't end in controversy. It'd also be swell if the California State Athletic Commission didn't think it was a swell idea for a Cesar Gracie affiliate instructor to judge a bout where a Cesar Gracie-affiliated fighter is competing.

It's time to separate the winners from the losers, the best from the worst, and the signal from the noise.

Best Card of the Year: UFC on FOX 7

Top to bottom, it's hard to think of a single card this consistently good on paper that also delivered in actuality. The match-ups were important, competitive and wildly entertaining. It's further proof that if you put elite fighters in bouts of significance against one another, more often than not they'll deliver everything you expect. Everyone from the UFC matchmakers to the fighters themselves to the FOX production team deserves a salute for a first-rate effort on Saturday evening.

Of course, it's also proof that the third and fourth FOX shows' matchmaking modeling was the real problem with why those shows underdelivered in terms of fan enthusiasm and ratings. It's a decent theory, but it turns out setting up a No. 1 contender's bout on FOX with the hope viewers will follow the winner to pay-per-view is, at best, unproven. More realistically, it creates FOX shows where the talent roster isn't nearly as stacked as it needs to be. Not every fighter in a position of consequence has the requisite star power. Not every star can be preserved for pay-per-view if the UFC expects to deliver adequate ratings on this television platform.

UFC on FOX 7 didn't have the benefit of the NFL to promote it but still delivered very good ratings. Coincidentally, it also a had a real main event and a strong cast of supporting fights. That's the model that works. 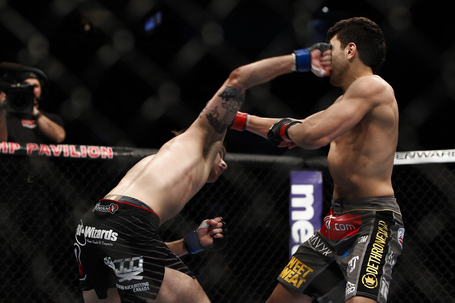 There were a number of sensational photos taken by Esther Lin on Saturday night. This one just happens to my personal favorite. It marks the precise moment when Jury was able to affect change. Find your favorite Esther Lin photo by looking at the entire gallery.

It's odd to label a fighter with a record as a long and accomplished as Thomson's to have a 'breakout' performance - a label typically reserved for a prospect - but it works. The fact is Thomson's career outside of the UFC had its highs, but it had plenty of lows, a bevy of health challenges and took place in a space such that his return to the UFC positioned him much lower on the lightweight totem pole than when he left. That's why Thomson's head kick stoppage of Nate Diaz is utterly remarkable. For starters, he stopped a Diaz brother with strikes. More importantly, he used a special, singular opportunity to make up for lost time in a way that catapults his stock like no other act could. The years of exile had an effect on Thomson's career, but he erased much of it by seizing the moment with violent pushback. And with that, a star is reborn.

It's not that the Team Alpha Male fighters are winning. They've done that for some time. It's how they're winning: relying on their wrestling base while showing more methodical, technical development in their striking. This, of course, doesn't just make their striking better, but opens up their entire offense while tightening their defense. It's a sea change and it's one that's just getting started.

What's notable about Ludwig's contribution is the particular nature of Team Alpha Male. That is, it's a camp comprised almost entirely of lighter weight fighters with wrestling backgrounds who share similar kinds of physicality, strengths and even weaknesses. Ludwig is able to have this seemingly gigantic impact because he's producing change at scale. Most camps aren't comprised of talent who share such overlap.

This isn't to diminish Ludwig's contribution. After all, it's working and for all the similarities among the fighters in the camp, each has their own needs. I bring it up because it appears the Team Alpha Male guys were onto something when creating their camp. If you can control a camp to recruit and keep a certain kind of fighter with a particular kind of skill set, that enables the right kind of coach to have a quick, dramatic and measurable impact almost right away. Camps with fighters of all different sizes with all manner of different problems? That's a much tougher nut to crack.

If you haven't already heard, one of the judges in the Ben Henderson-Gilbert Melendez bout is actually a Cesar Gracie affiliate instructor. His name is Wade Vierra and he scored the bout for Melendez. In and of itself, that latter bit of information is not controversial. Lots of unbiased, qualified observers scored the bout for Melendez. I'm also not accusing Vierra of outright bias. Despite his close connections, he could still be an honest broker in this process and tried to score the bout as fairly as possible.

But that's hardly the point. Vierra can be as deliberate and honest as he wants, but the kind of experience and closeness he has with central figures in this fight make even his best-intentioned judgment subject to deep bias. And that's just assuming he's honest.

How on earth is it possible for the California State Athletic Commission to place someone with this sort of conflict of interest in this kind of compromising position? And why didn't Vierra turn down the assignment of his own volition? Even if Vierra's presence here had no discernibly improper effect on the outcome, we may not be so lucky next time if the sorts of screens the CSAC is charged with using seem to be missing in action.

I'm not sure precisely what it is, but there's something about the way Henderson fights that speaks to judges. In fairness, I scored the bout on Saturday for him as well. I'm not suggesting awarding Henderson the bout is indefensible. It's just that MMA is a sport where fighting opponents close means flipping a coin. Yet, Henderson seems to keep winning the coin flip, defying the 50-50 odds that should be dictating these affairs.

Is it his power kicking style? Saturday notwithstanding, is it his supreme physicality? Is it his ability to deliver a big punch in key moments of a round? I honestly don't know. Maybe it's just dumb luck. But between the hugely controversial Edgar series and the Melendez fight, Henderson seems to compete in a more impactful way than his opponents. Well, as far as judges go, anyway.