The UFC hasn't had a battle of undefeated fighters in a championship match since Lyoto Machida challenged Rashad Evans for the light heavyweight title at UFC 98.

But Cat Zingano's victory over Miesha Tate at The Ultimate Fighter 17 Finale changes all that. Zingano improved to 8-0 with her third-round TKO win, setting her up as a coach against UFC bantamweight champion Ronda Rousey and a future title shot. Rousey, of course, is unbeaten at 7-0.

Zingano's victory, in her UFC debut, also rocketed her up the SB Nation pound-for-pound women's poll. Zingano placed third in the top 10, behind Rousey and and former Strikeforce women's featherweight champion Cris Cyborg. Cyborg finished second with 63 points after defeating Fiona Muxlow in her first bout since Dec. 2011, so most of the pollsters haven't held her inactivity or steroid suspension against her.

Also of note in this month's rankings is the simple effect mass exposure has on the rankings. Women's MMA fields weight classes all the way down to the 105-pound atomweight division, but fully half of the fighters in the top 10 are signed to the highly publicized the UFC bantamweight division. Invicta's champions at flyweight (Barb Honchak, winner of seven straight), strawweight (Carla Esparza, who has won six of her past seven) and atomweight (Michelle Waterson, who has won nine of her past 10) all appear in the "others receiving votes" category. 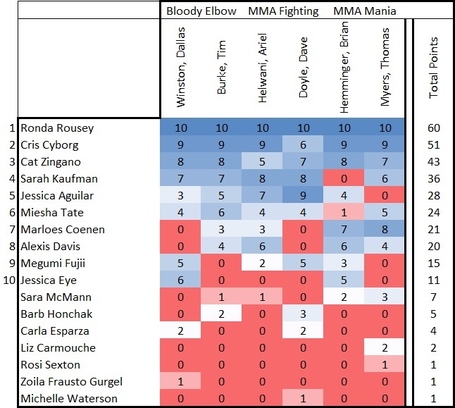 1. Ronda Rousey (7-0, 60 points): Puts The Armbar Streak on the line against Zingano, who got out of a second-round armbar against Tate.

3. Cat Zingano (8-0, 43 points): Zingano proved both her durability and finishing prowess in her win over Miesha Tate.

4. Sarah Kaufman (16-2, 36 points): In an odd spot, as she's widely acknowledged among the best but isn't likely to get another shot at Rousey soon after her quick armbar loss last summer.

6. Miesha Tate (13-4, 24 points): If the timing works out, a match with Liz Carmouche seems to make sense on the heels of both fighters' high-profile losses.

7. Marloes Coenen (21-5, 21 points): Coenen has won four out of her past five heading into an expected rematch with Cyborg.

9. Megumi Fujii (26-2, 15 points): Pioneering Japanese fighter last fought in December, next bout has yet to be announced.

10. Jessica Eye (9-1, 11 points): Bellator flyweight standout is recovering from a back injury.